When he hits the road this fall, Marty Stuart will take a few minutes to tell the story of Badlands: Ballads of the Lakota, his daring concept album about the Lakota Sioux, released 10 years ago this October. It’s a decidedly under-the-radar release, and no doubt some fans who have never heard the album will arch their eyebrows when Stuart lights into the title track. But the project holds a special place in the singer-songwriter’s catalog — and stands as one of the best overlooked records of the past decade.

In an industry that often sidesteps political controversy in favor of shopworn sentiments set in the beds of pick-up trucks, Badlands delivers caustic observations on the U.S. government’s attempted obliteration of Lakota culture in the 19th century and the hopelessness that plagues the Pine Ridge Reservation in South Dakota where many Lakota people live.

Scan a list of the top country hits from 2005 — like Brad Paisley’s “Alcohol,” Gretchen Wilson’s “All Jacked Up” and Neal McCoy’s “Billy’s Got His Beer Goggles On” — and it’s easy to understand the uniqueness of Badlands. Like Paisley and company, Stuart has recorded his share of party and drinking songs over the years — “The Whiskey Ain’t Workin'” and “Honky Tonkin’s What I Do Best” (both with Travis Tritt) among them — but in 2005 he attempted to draw Native American issues back into the national dialogue.

Back then, country music’s closest visible connection to native peoples was the concerts its artists played at Indian-controlled casinos. But “Casino,” a sobering track on Badlands, calls out those gaming halls and the empty salvation they offer Native Americans: “They built a casino out under the stars/With neon lights blinking on tired rusty cars/Card sharks take my money, whiskey puts me in jail/An oasis of misery, I know it so well.”

Stuart reimagined Johnny Cash‘s obscure “Big Foot” (the only cover on Badlands) to indict the Seventh Cavalry’s attack on the Lakota at Wounded Knee in 1890, but in “Broken Promised Land” — with its phantasmagorical instrumental prelude — he unleashes his own venom at President Bill Clinton, a modern great white father, who arrived in Pine Ridge in 1999 with retreaded solutions to the reservation’s problems. “He brought with him from Washington/A bag filled with dreams and cake/To spread among the poor/In the poorest county in the whole United States,” sings Stuart.

“I can’t help but get angry,” Stuart tells Rolling Stone Country. “If you and I were to get in our cars and drive out there we would find 14 people living in a house trailer, people without money for medicine and a lot of that kind of discouragement. It’s not glamorous up there. Our original people always wind up at the end of the line.”

Indeed, the champion of traditional country is nothing if not ambitious. A child prodigy on the mandolin when bluegrass legend Lester Flatt brought him to Nashville in 1972, the youngster unabashedly courted the men and women who defined country music. Upon Flatt’s death in 1979, Stuart joined Doc Watson’s band, but all the while kept his eye on Johnny Cash. 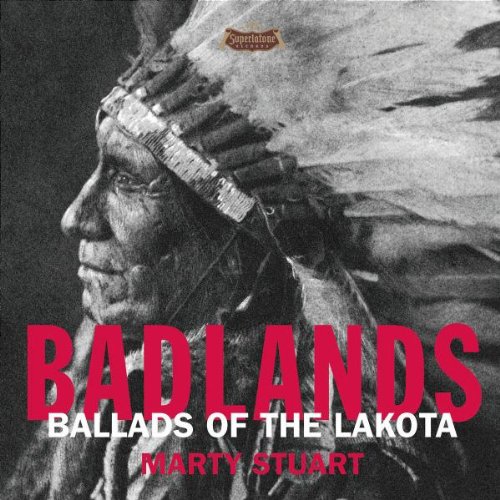 Later in the year, Cash hired the young face with flashy talent to enliven his flagging road show. The heady new gig linked him to the gods of country music — Willie Nelson, Kris Kristofferson, Waylon Jennings — not to mention Cash himself, whose well-known concept albums inspired him.

Not long after Stuart’s first live show with the Man in Black, the band played a benefit at Pine Ridge. “That’s when I fell in love with the Lakota people,” says Stuart.

He also met John L. Smith, the Cash discographer and friend and chronicler of the Lakota, who taught him about Native American culture and history. In 1995, after many visits to the reservation with Smith, he began forming the narrative that would become Badlands.

By the mid-Nineties, Stuart had his own major recording contract, but his dream of an entire album about Native Americans remained on hold in favor of his top-selling mainstream albums that imbricated playful hillbilly hits over country music anthems such as “Let There Be Country” and “The King of Dixie.” His momentum faltered in 1999 when The Pilgrim, a concept album that earnestly though awkwardly distilled country music’s themes and traditions, floundered on the charts.

Nursing the rejection, Stuart retreated from the spotlight. He scored a Hollywood film, coached the ailing Cash through the final chapter of his recording career and spent time with his second wife, 1960s country queen Connie Smith, whom he married in 1997.

When he reemerged in 2003, Stuart often dressed in black as if in mourning for Cash, who had died that same year, and he spoke with humility about a recent DWI arrest. But his ambition still burned. Boasting a new band that featured brooding guitar genius Kenny Vaughan and veteran session drummer and vocalist Harry Stinson, he released three albums in the space of 13 months: Souls’ Chapel, Badlands and Live at the Ryman, in addition to 2003’s Country Music.

Badlands radiated the aura of Cash, who had recorded his own album on the plight of the American Indian entitled Bitter Tears in 1964 (the album recently received the tribute treatment) and spoke out on Native American issues as fervently as he had on prison reform. “It seemed to be the way I processed his death, as much as anything,” says Stuart. “I felt like John was looking down on us. I felt like American history was looking down, and all those elders — the people who had gone on before — were looking down.” 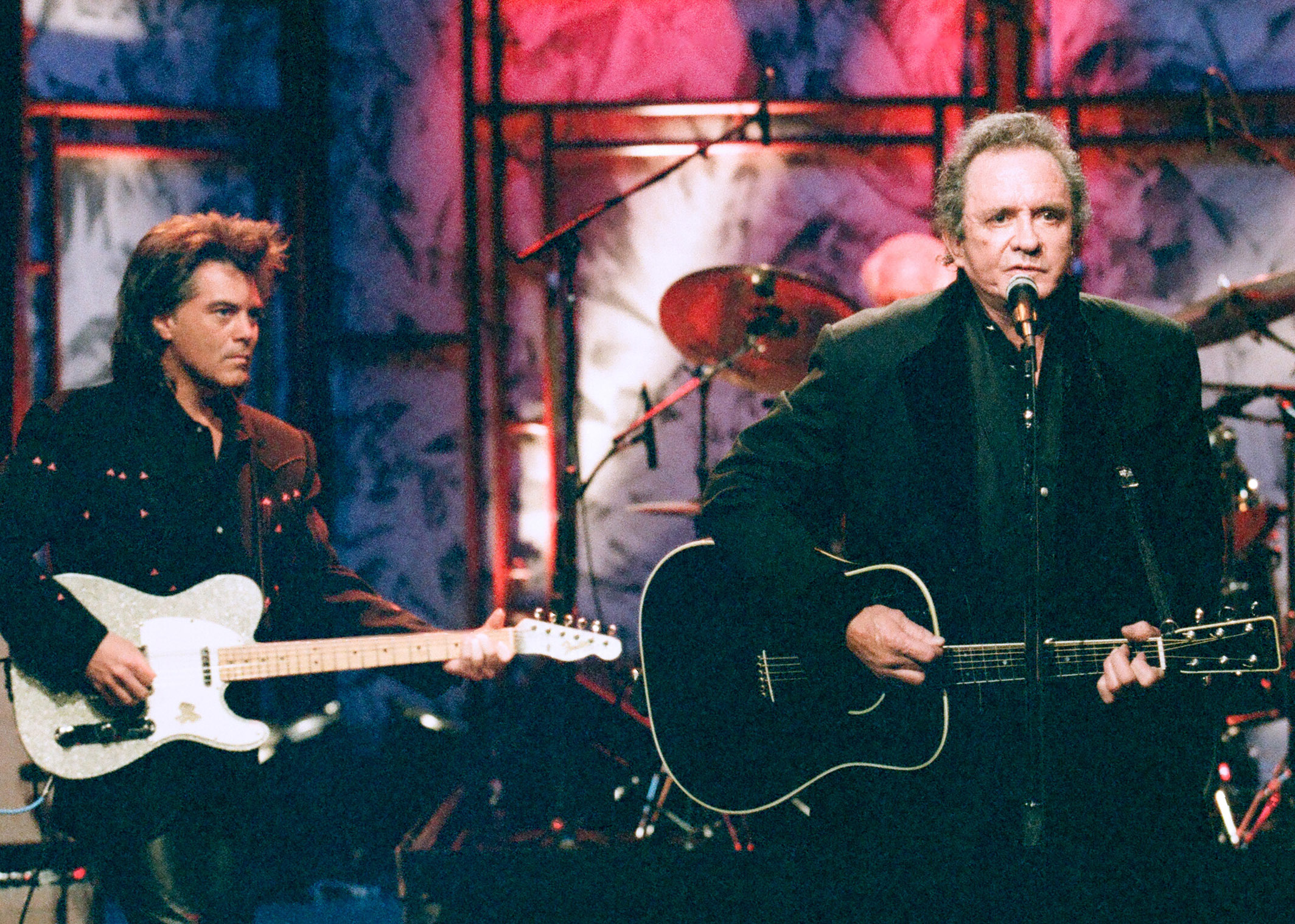 Badland‘s release in 2005 found Stuart still chasing the big statement, but he had finally mastered the physics of the concept album. Unlike The Pilgrim, the new set offered taut messages and riveting musical arrangements of rock, folk, country and Native American music.

Although his voice could never match the gravitas in Cash’s, he nonetheless sang like a preacher with the devil on his back. “You understand that he really believes what he’s saying here,” says Joan Kornblith, a radio disc jockey based in Washington, D.C., who has often given airtime to Stuart’s music. “It’s not fake. It’s authentic.”

But the collection tripped over itself in search of an audience. The narrative occasionally stalled, as in the six-minute “Walking Through the Prayers” and the dull “So You Want to Be an Indian.” And like many concept albums, the record lacked a radio-friendly single. “On commercial radio you have to appeal to the widest net and this does not do that,” says Kornblith. “This appeals to a certain type of person. You have to have an interest in the world around you, either know something about it or be curious.”

Only Stuart’s devoted fans bought the album. “I knew that it didn’t stand a chance commercially, but I knew spiritually it was the right record to make,” he says. “The story needed to be told.”

Long out of print in its physical form, Badlands’ legacy remains tangible, bearing rare witness to country music’s power to ring the bell of social justice, as it has over the years in songs and albums about prisons, the demise of the family farm and the working-class experience. But because social justice rarely sells in the millions, Stuart’s record seems destined to drift, collecting its faithful audience one person at a time.

Kenny Bohling of Sevierville, Tennessee, is one of the faithful. An upstate New York native, he was playing banjo for a living in 2005 when his local radio station cued up “Three Chiefs,” Badlands‘ stirring dream sequence about Crazy Horse, Sitting Bull and Red Cloud meeting God. “By the time the song was all the way over, I was crying like a two-year-old,” explains Bohling. “I don’t even have words to describe the toll it took. I became obsessed with trying to help out. I became obsessed with finding out all I could about the reservation, about the poverty, about the government, about everything about the entire situation.”

After he learned of the winter deaths on the reservation due to hypothermia, he began driving to South Dakota with loads of used blankets donated by East Tennessee hotels. Then he got serious, starting a leather-goods company that employed Lakota workers to make straps for guitars, banjos and mandolins. Today, at least five people in Pine Ridge earn full-time wages at the work that Badlands inspired, and dozens of other Lakota people work part-time for Bohling.

“That would earn you a knighthood in some countries,” observes Kornblith. “Conversely, if the album made one person pick up a book and learn about those people, it’s done its job. If it made somebody stop to think that maybe we have not always treated indigenous people correctly, it’s done its job. Marty should be very pleased.”