The oil is hot and bubbling gold, but Tyler Childers is not flinching. It’s dinnertime here at his rental cabin north of Nashville, where he’s holed up for a few nights, and the songwriter is standing in front of an electric stove with one hand in some cornmeal and one in the sink, gently holding a mushroom. Before he left Kentucky this morning, Childers had foraged the fungi himself — delicate and creamy-white ones he is “almost positive” aren’t poisonous — which he threw in a mesh bag and hit the road. Now, he’s ready to fry.

“I’m going to cut all the ugly parts off, and after that it will be all turnin’ and burnin’,” he says, squeezed against the tiny countertop with a small knife. Childers, 27, is here from Kentucky for a few days to make his debut at the Grand Old Opry, and to open for Margo Price at the Ryman Auditorium, but he wasn’t in the mood to go all the way into town for an interview — so he nixed plans to meet up at a bar in East Nashville in favor of hanging back at this hillbilly-maximalist cabin, frying mushrooms and roasting asparagus while his band carries out some hot chicken. Childers is a hunter too, but he sat out this season when his grandmother fell ill, so he’s enjoying this connection to nature again: tracking, capturing, nourishing.

“If your hobby is playing sports, at the end of it you might get a few concussions,” he says, working up a sweat in a tie-dye Grateful Dead shirt, his red hair pulled back into what can only be described as the polar opposite of a man-bun. “If your hobby is hunting, at the end of it you get to eat what you catch, which is awesome,” he says. Last time he was out with his brother-in-law, who works at the Army Depot, he bagged two deer.

A few minutes of mushroom gathering, though, is all that Childers has had time for these days. In the past year, he’s been on the road constantly after his official debut LP, Purgatory, helped him score slots opening for Price, John Prine, Jack White and Sturgill Simpson, who co-produced the record with Johnny Cash engineer David Ferguson. He’s nominated at September’s Americana Honors & Awards as Emerging Artist of the Year, his shows have been selling out, sometimes in minutes, and he’s finally transitioned from a van to a proper tour bus, which has cruised him to most of the major festivals this summer, including Bonnaroo, Lollapalooza and Newport Folk Festival. He’ll embark on a headlining tour this fall.

Childers doesn’t mind being on the road this much — they sometimes listen to the Cocaine & Rhinestones podcast on the way to shows — save for missing his wife, Senora May, who is also a singer-songwriter. But he knows it’s more fulfilling, to him at least, than the alternatives of where he grew up. “If I wasn’t doing this, I’d be working at Toyota or something,” he says, referencing the Georgetown, Kentucky, car factory.

Childers’ sound — a fusion of folk, bluegrass and country with a raw, emotionally-gripping tinge that’s halfway between a confession and a holler — is born of his life growing up in East Kentucky, a place rich with forgotten stories and people just trying to do the best they can. It was a childhood that now enables him as a songwriter to not glamorize Appalachia (“if you say apple-aychia, I’ll throw an apple-athcha” he jokes from the stovetop), but to capture the beauty in its flaws: the bond between families generations thick; the calloused skin of hard days and harder pasts; the black dust of coal and the white dust of cocaine. Born in Lawrence Country, Childers was a red-haired kid who wanted to be a journalist or an English teacher, but that changed once he started playing the guitar. His grandfather — “pawpaw” — bought him his first one, and Childers took to writing.

“My first song was a hardcore knock-off of ‘Tangled Up in Blue,'” he says. “It was based on a story maybe I had heard before. I was 13. The woman died in the end — she was sleeping on the railroad tracks. Pretty edgy, ya know.” 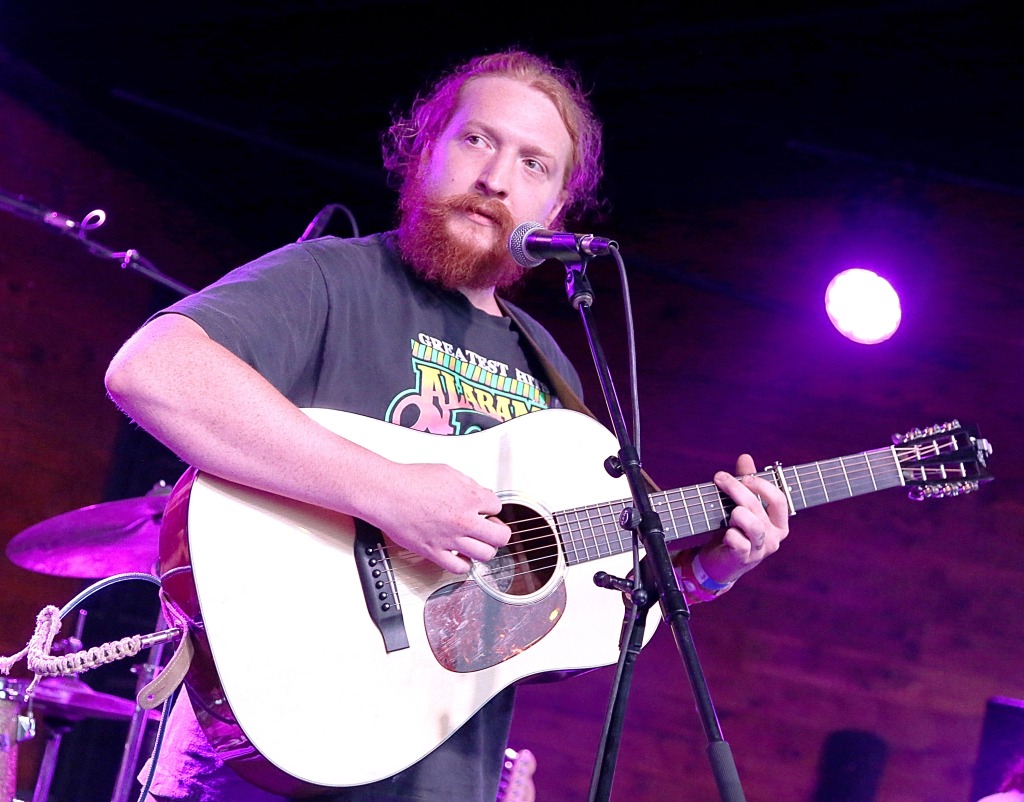 Singer Tyler Childers performs in concert at the Historic Scoot Inn on July 19, 2018 in Austin, Texas.

In eighth grade, when spending most of his time on the bench on the JV baseball team, his coach started playing John Prine. Childers remembers the moment vividly. “I turned to him and said, ‘What is that?’ And he said, ‘You mean you have never heard John Prine?’ Ever since then, I’ve been blaring him, and he’s one of the first songwriters who had a big influence on how I wanted my sound to be.” When Childers opened for Prine on tour, he joined him for versions of “Paradise” and “Please Don’t Bury Me.” Says Prine of Childers: “He’s wonderful fella, a really good writer, and my audiences love him.”

David Prince — a Kentucky-based teacher and musician who performs under the moniker of “Laid Back Country Picker” — had a freshman Childers in his class, where it was clear early on that his young student stood out from the usual pack of musically-motivated kids. “A lot of kids like music, but Tyler was into Bob Dylan,” says Prince. “He liked to write songs, and they were phenomenal for a 14-year-old kid. I remember him asking, ‘Do you know who Jack Kerouac is?’ I said, ‘Yes, sir.’ I’d never had a kid ask me about Kerouac before. He was an old soul.”

Prince was also Childers’ instructor in the Kentucky Youth Assembly, a model-government program. On a trip to Louisville freshman year, Prince remembers that Childers had an energy that was nearly impossible to dim . “He was just a wired little kid with a guitar running around and singing Johnny Cash,” Prince says. “I remember we told him he couldn’t have any more coffee, so he didn’t stay up late drinking it and writing songs.”

Like any good Kentucky kid, bluegrass was a heavy part of Childers’ life, as was Southern gospel, but he liked Nirvana and Drive-By Truckers too, just as much as he and his friends liked skirting around the back roads looking for trouble, or at least a way to kill time. But Childers also paid attention. He was in high school when Diane Sawyer came to East Kentucky to film a segment for 20/20 about Appalachia — on it, she talked about “Mountain Dew Mouth,” a name for the tooth decay that results from consuming too much of the yellowish, caffeinated soda. The segment was widely criticized for how it preyed on the people of the region, setting them up to look like sugar-swigging robots by giving the drink out for free during filming and encouraging those depicted to imbibe.

“They took all the worst stereotypes and exploited them for show,” he says, dropping the mushrooms in the oil. “I’ve always kept that in mind. They were giving away free pop, and so there are a bunch of kids drinking Mountain Dew: well, hell yeah, you gave them free Mountain Dew! You create this division that really isn’t there.” (When the late Anthony Bourdain featured West Virginia on Parts Unknown, he used Childers’ songs, which the singer approved: “I always liked him,” he says).

This split reality — the way the media and the rest of the world, outside of his community, portrayed Appalachia and blue-collar America, and the way he saw it day to day — clearly left an impression. Childers started writing songs about what life was really like up in those hills — on 2011’s Bottles and Bibles, recorded in a friend’s backyard studio, he sings about the struggle to raise a family and put food on the table with one foot in the coalmine and one in the grave (“hell’s probably better than trying to get by,” he laments on “Hard Times.”). Childers was a teenager, but he wanted to tell the world what existed beneath the “Mountain Dew Mouth” narrative, and he wanted to tell the people who lived there that he understood their plight. And that he would tell their truth.

“There is a lot of tragedy, if you want to look at it that way, but there is hope,” he says. “There is a sense of family, and a sense of looking out for your own.”

Childers tried college, but ended up dropping out and working odd jobs installing flooring, constructing houses and landscaping while playing music — and building a solid following around Kentucky and West Virginia. Eventually, he met a fan who agreed to let him stay on his property in exchange for some labor. There was a cabin there that he and Senora would long for. It became part of the song “22nd Winter,” and is where the couple now live.

Word about Childers started creeping across state lines and he began booking gigs in Nashville, where he met Sturgill Simpson’s drummer, Miles Miller, after a night at local club the Basement. Miller thought Childers and Simpson shared common ground, and the Sailor’s Guide to Earth Grammy winner and young artist ended up making Purgatory together, along with Ferguson, at the Butcher Shoppe studio in town. When the LP came out a year ago this month, it did shockingly well in sales, hitting Number 28 on the Billboard 200.

Purgatory — “hell with hope” — is a story of a man in progress, caught between love (Senora, immortalized on the gorgeously gut-wrenching ode “Lady May”) and the pain and pull of the past. There’s “Whitehouse Road,” which encapsulates the hamster wheel of crushed dreams and the self-medication that makes it all bearable, and the freedom that comes in forgetting (“get me higher than the grocery bill,” he sings in a line that says more than most could write in several paragraphs). The crowd-pleaser “I Swear (To God)” epitomizes the struggle to keep the faith even when it feels impossible. And “Universal Sound,” in which Simpson and Childers let power riffs seep in, is more obscure in its lyricism (it’s a song about meditation) but stays grounded in gritty details of mason jars and tobacco juice.

“Tyler Childers is one hell of a songwriter,” says Margo Price. “He’s a down-to-earth dude who doesn’t care about anything but writing well crafted, honest songs. The world needs more musicians like him.” Price recruited Childers to open two of her May headlining shows at the Ryman, where he was joined by Simpson and Prince the “Laid Back Country Picker.” The crowd offered a standing ovation only two songs into his set, rising to their feet while Childers stared out at the audience, just clutching his guitar.

Childers has been writing songs for the next album, but he’s in no rush (on whether or not he’ll work with Simpson again, all he’ll say is, “It would be cool, if he wants to”). As usual, he’s singing about both what he knows and what he sees. “I’ve been writing a lot of road songs. Writing a lot of homesick songs,” he says. “But once you start playing them out, it all ain’t no secret anymore. Everyone knows how you feel.”

But now, the mushrooms are fried, and it’s time to eat. It all seems like a strangely intricate process — the foraging, the breading, the frying — just for a few bites of food. But this is what Childers does — if it isn’t crafted by hand, it ain’t worth it.

“These are maybe the best ones I’ve done in a long time,” he admits, after taking a bite. “Not going to brag, but I got the batter down pat, finally.” He offers them up with a warning: “Be careful, because they’re hotter than fire.”