Marah’s 2008 performance on Late Night With Conan O’Brien should have been the ultimate coming-out party, a shot of high-profile national PR to launch an ambitious new album and U.S. tour. Instead, the January 9th appearance was a death knell for both the Philadelphia roots-rock band and their sixth studio record Angels of Destruction!, released only the day before.

Within a week of the Conan spotlight, Marah split up, with band discord to blame. All of their U.S. dates were scrapped, squandering their best chance yet at the brass ring and leaving the well-reviewed Angels of Destruction! flapping in the wind.

“We would have been in a great position, I know. Don’t rub it in,” says Marah’s frontman Dave Bielanko, addressing what could have been with a “whatever” Philly attitude. “There were internal problems, and even the engineers on the record knew we had painted ourselves into a unique modern corner. We had a bigger tour booked than we ever had, in more prestigious venues. But that shit don’t bode well with the promoters. No one was happy with us.”

Formed in the mid-Nineties by singer-guitarist brothers Dave and Serge Bielanko, Marah developed a reputation for sweat-soaked live shows akin to those of their mentor Bruce Springsteen – who invited the siblings to perform with him onstage at Giants Stadium in 2003. Their first two albums, 1998’s Let’s Cut the Crap & Hook Up Later on Tonight and 2000’s Kids in Philly, generated major buzz, garnering famous fans from Stephen King to Steve Earle, who released Kids in Philly on his E-Squared label. Personnel changes became the norm, however, and the group’s next string of albums were hit or miss at best, with 2002’s Britpop experiment Float Away With the Friday Night Gods a fan-alienating disaster.

But with Angels of Destruction! Marah rediscovered their mojo, and also landed on the most potent, cohesive lineup of their history: the Bielankos, multi-instrumentalist Christine Smith, guitarist Adam Garbinski, drummer Dave Petersen and bassist Kirk Henderson.

Recorded in Brooklyn, Nashville and in a Pennsylvania cabin, Angels of Destruction!, released via Yep Roc, built on Marah’s signature sound: a combustible mix of acoustic string music and rebellious Replacements-like rock & roll fleshed out by imaginative lyrics. It was, by today’s increasingly broad definition, an Americana album, full of banjo, harmonica, clavinet, accordion, autoharp, horns, bells and bagpipes – one that would likely be celebrated by the music fans, journalists and insiders gathered at this week’s AmericanaFest in Nashville.

“Americana has always been a part of our vocab,” says Serge, whose Springsteen-like gift for mid-song storytelling onstage made him the raconteur of the band. “Dave and I lived through alt-country, which gave a rebirth to Americana trickling down into younger people’s discussions. You pick any one band and start to dig, before long you’re digging into the roots of something musically, even with a rock band that is using bagpipes. There’s your Scottish coal-mining influence. It’s all there.”

Now, Angels of Destruction!, with all its bagpipes and keys – and the band itself – is getting a second chance. Eight years since its initial release, the LP will be reissued in October as a deluxe vinyl package. The Bielankos chalk up the rebirth to the vinyl renaissance and a Kids in Philly milestone.

Last year, Dave and Smith, who soldiered on after the dissolution of the core group with various rotating members, including 11-year-old phenom Gus Tritsch, orchestrated a vinyl reissue for Kids in Philly‘s 15th anniversary. Soon, talk arose of celebrating the release with a one-off show and, with Mark Sosnoskie replacing Henderson on bass, Marah mended fences with its classic Angels lineup to play a triumphant gig last October in their hometown.

“I can tolerate people, their shortcomings, if they can come together and do one thing to make people happy,” says Dave of burying the hatchet. “The fine art to me is the rock & roll show and it’s a hard thing to do. It’s not up to [the fans] to understand the dynamics or the stuff that goes into it. I was just saying to Serge, the sword swallower doesn’t really need to love the bearded lady at show time.”

Bolstered by their renewed onstage chemistry, the group is testing the waters once again as a touring band and view Angels as the next logical step in their second act. 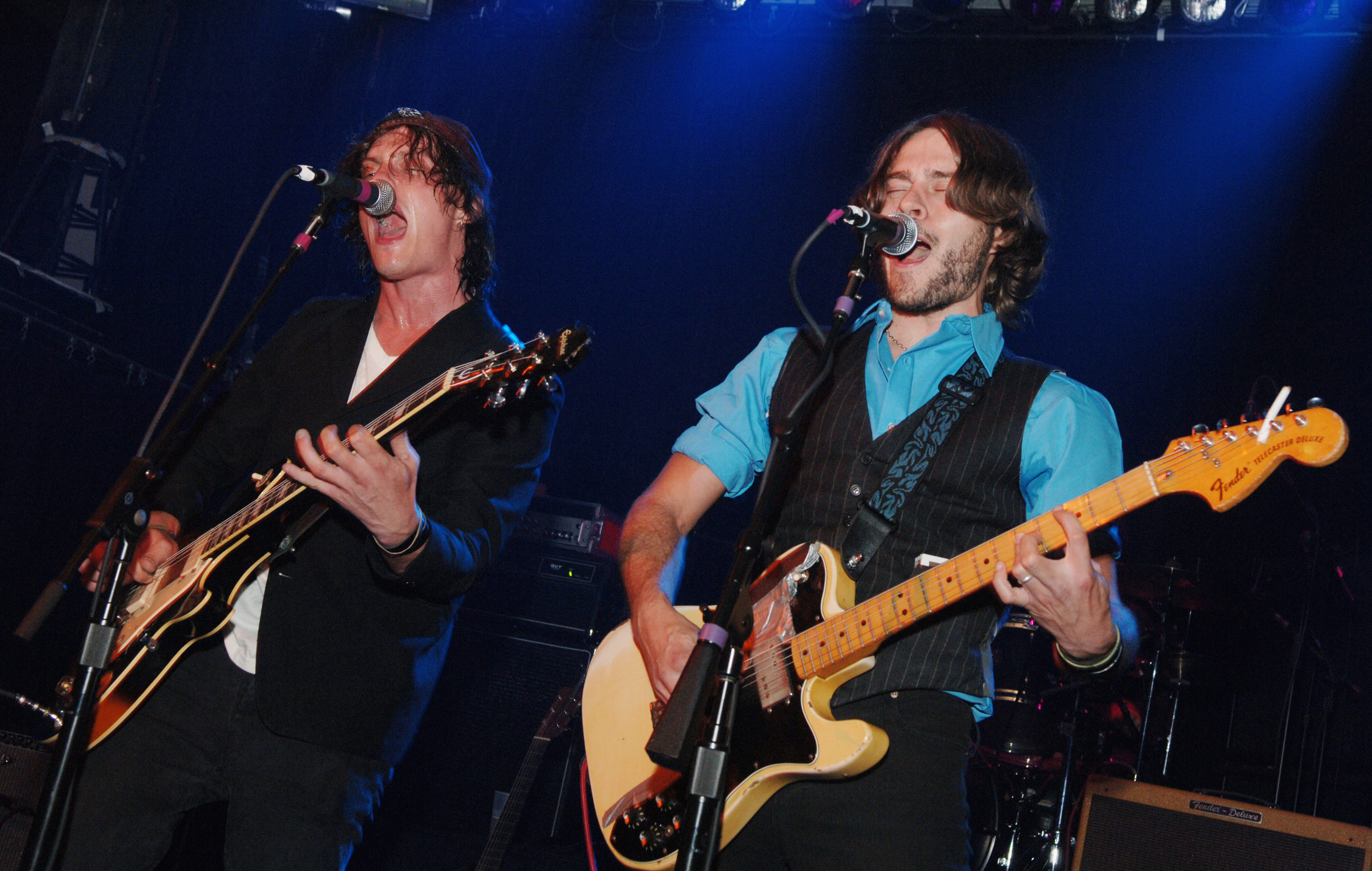 “It’s a nod to us coming back together, because that was the last place that we left off,” says Dave. “It’s been remastered and it’s twice the record it was. It holds every bit of water that it did at that moment, and it’s really fun to play live and an exciting place to pick it back up.”

Listening to the vinyl version on headphones, Angels of Destruction! spins like Phil Spector’s take on Americana. It’s a swirling, wall-of-sound album with hints of Polish and Spanish music sprinkled throughout. If Let’s Cut the Crap was Marah channeling the loose feel of Greetings From Asbury Park, Angels was their attempt at the majesty of Born to Run – albeit derailed by their own dysfunction.

Opening track “Coughing Up Blood” is richly layered, chugging along with Dave’s stream-of-consciousness wordplay (“Empty my arms of all that pollutes me / I’m a comet / I’m a flash“), Serge’s phantom backing vocals and Smith’s haunting bells.

“I wanted it to sound like the Scooby-Doo van,” says Dave. “It’s a clanging, calamitous sort of sound. But there was a great prophecy to what we were saying, which was, ‘We are dying.'”

“Wilderness” was inspired by Serge’s move to Utah after getting married. It’s a rollicking, punk affair, with a “Chain Gang” “ooh-ah” call-out and frequent tempo changes. “My wife at the time was an ex-Mormon,” Serge says. “I was fascinated with her history and the Mormon story – the idea of someone walking across America seeking Zion.”

Utah, Brooklyn and Philly all inform the album, but Nashville looms particularly large.

“We have a long history with Nashville. There is something about it that is inspiring,” says Serge. “A lot of the songs that I wrote on the record where when we were staying in this little hotel. I remember stepping out on a hot-ass late summer day with fucking cigarette smoke coming out of the room and across the parking lot. I was like, ‘We gotta make this record, because I’m killing myself writing these songs.'”

The band was indeed in a vulnerable place. Serge was navigating life as a newlywed far away from his family and friends. Dave had just gotten sober prior to writing Angels of Destruction!.

“One night we played our song ‘Reservation Girl’ with Bruce Springsteen in New Jersey, which should have been an awesome memory for me – for anyone – but the very next day it pretty much didn’t even happen,” says Dave of his excessive drinking. “I remembered a split second of eating someone’s birthday cake backstage, doing tequila shots with total strangers, turning my amp up to 10, that was about it. As far as I knew we never even played music that night.”

“Blue But Cool,” sung by Dave but inspired by Serge’s marriage, reflects that fragility and uncertainty, balancing out the bravado of the album’s title track and the carpe diem swagger of “Old Time Tickin’ Away.”

“I was married a short time at that point, and there was already a lot of friction,” says Serge. “I’ve always been insecure in my daily life and that was a real look at marriage, which is something I never could have done from outside the box.”

The song also features one of the Bielankos’ favorite lyrical allusions: angels, which pop up in the title track and in the album’s standout song, “Angels on a Passing Train.”

“It’s one of the most important songs on the record and represents the band at its finest,” says Smith, who has toured with Ryan Adams, Crash Test Dummies and Jesse Malin. She and Dave sketched out the song while living in the Greenpoint neighborhood of Brooklyn. “It was very Polish, and you get that kind of vibe with the accordions and the change in the rhythm at the end of the song.”

“Every single member of the band I see shining in their own way on a song like ‘Angels on a Passing Train,'” says Dave. “It reflects the romanticized notion of Polish music in Greenpoint; it’s not real, it’s an illusion. But as an artist, that’s the best thing you could ever have.”

For the Bielankos, the band itself was born out of illusion, an underdog’s attempt to break free from the drudgery of city life or, worse yet, suburbia.

“It was a cop-out of the 9-to-5. It was a grift, to get into a fucking band so I don’t have to deal with the rest of it,” says Dave. “I still live that crazy nightmare of a dream.”

After stints, both together and apart, in South Philly, Brooklyn and Utah, the brothers now reside near each other in rural Central Pennsylvania. That proximity also played a part in the reunion.

“Once we were all in the same wheelhouse, and by all I mean the engine was together, me and Serge, the idea starts to grow,” says Dave. “I make no bones about it. If anybody gives me an inch, I’m going to get ambitious and push toward the next thing.”

Serge, a single father of three and the older of the Bielankos, was hesitant to commit to playing again but couldn’t resist the brotherly bond. “I could see a light come back into my brother’s eyes. Which is frightening as much as it is comforting. I was happy to be playing some role in his life where he was maybe, really happy about getting through his day,” he says, recalling world tours with Marah. (The band will play an album-release show September 23rd at the Bowery Ballroom in New York, before returning to Spain for a seven-city run.)

“It’s like veterans of foreign wars,” Serge continues. “I hate to compare it to that, but in the same sense, I don’t know whether old bricklayers get together and feel this fraternal instinct. It’s possible, but when you have blood and pile on top of that the demands and history of being in a smaller time rock & roll band, it created a really unique relationship for us.”

Smith sees that same renewed spirit in the band as a whole. Still, she singles out Dave’s vision and the way he blended rock and country aesthetics, beginning with Let’s Cut the Crap and evolving on Angels of Destruction!.

“Everything really stems from Dave. It’s in Serge’s songwriting as well, but Dave is Marah – the magic,” she says. “Dave is the one who introduced me to [country] music. It was really interesting for those two things to meet – electric guitars and banjos – and that’s something I think Marah does brilliantly.”

For fans of the band, then, and those who may discover them thanks to the Angels re-release, it’s welcome news that Marah is plotting new music. Serge has a list of song ideas taped to the kitchen cabinets in his farmhouse, while Dave is coming to terms with what 2016’s Marah might sound like.

These days, he takes the same “let it happen” outlook toward the band that he did with his journey through sobriety.

Following up in an email, he recalls his first show sober, at the Stone Pony in Asbury Park, New Jersey, prior to recording Angels of Destruction!. “It was tricky, hard to remember the words at first … but I got it eventually,” he says. “We left on tour right from the Pony and I just took it night by night. What are you gonna do?”