Thirty years ago, the Georgia Satellites released one of the simplest yet most quietly influential songs ever put to tape: the Southern-rock love-and-marriage ultimatum “Keep Your Hands to Yourself.” With its bluesy two-string intro and singer Dan Baird’s high-lonesome yodel, the Atlanta band’s bare-bones debut single stood out in an era dominated by slick production and synthesizers. But while the ascent of “Hands” would be cut short at Number Two on the Billboard Hot 100 the following year — denied the top spot by Bon Jovi’s synth-heavy “Livin’ on a Prayer” — the bar-band staple would nonetheless help return crunchy guitar chords to rock and, unexpectedly, influence a number of today’s country artists.

“Somebody made the comment that it was the song that saved rock & roll and ruined country music at the same time,” says Baird, laughing. “It meant, it brought rock & roll back to its roots for a few minutes, but it turned the corner on country being afraid of dumb loud guitars.”

Indeed, those loud guitars are now all over modern country, with pedal steel and fiddle replaced by Fenders and Marshall amps. While “Keep Your Hands to Yourself” isn’t directly responsible for any country-to-rock sea change, the song’s popularity did fill a void in the genre and helped reconnect it with its Southern-rock lineage.

“We were a rock & roll band that the NASCAR people picked up on. The death of Ronnie Van Zant left such a gaping hole that [country music] could fit in Jason and the Scorchers, the Kentucky Headhunters, the Fabulous Thunderbirds and us,” says Baird, rattling off Satellites’ peers who also found a country audience.

Baird is seated in a booth at an East Nashville club, sipping soda water prior to a hometown tour stop with his band Homemade Sin, who released the ferocious new album Get Loud in November. A Nashville resident since 1989, he recalls incredulously how some country radio stations began spinning “Keep Your Hands to Yourself” during the song’s surge. Eventually, country artists from every decade would record versions: Hank Williams Jr. in ’87, John Anderson in ’94 and Sawyer Brown in ’05.

“We were going, ‘This is a rock & roll song; it’s not a country song!’ We love country music, we know what it is — we’re not it,” Baird says, offering the same gap-toothed smile he showed off in the video for “Hands,” which entered heavy rotation on MTV. “I just wanted to be Carl Perkins, with Joe Perry on guitar. Or NRBQ and Aerosmith crammed together with AC/DC on the drums.” 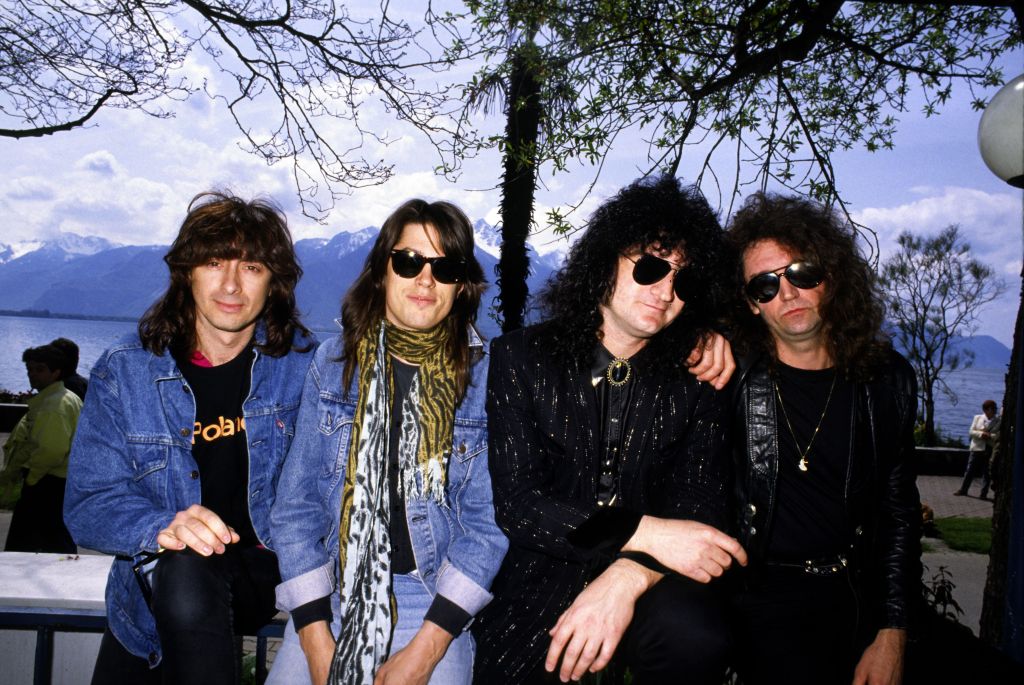 The Georgia Satellites in Montreux, Switzerland, in the 1980s.

To the amazement of Baird and the Satellites — rounded out in their Eighties heyday by guitarist Rick Richards, bassist Rick Price and drummer Mauro Magellan, who continues on with Baird in Homemade Sin — “Keep Your Hands to Yourself” made its way into rock clubs and honky-tonks alike. It became a must-know on every band’s set list.

“Anybody who has ever played in bars has played ‘Keep Your Hands to Yourself.’ It’s a monumental piece of rock & roll,” says Chris Stapleton, himself well-versed in blues progressions and Southern rock solos. “It makes you feel exactly like rock & roll is supposed to make you feel.”

“I remember seeing the video on MTV and it instantly hit home. I instantly connected with it and I always have,” says Charlie Starr, singer for Southern-rock torchbearers Blackberry Smoke, who recently shared a stage on the Outlaw Cruise with Baird. “That revved-up Chuck Berry riff — that runka, runka — has been utilized even in country music. It covered all the bases.”

In fact, elements of that riff and “Keep Your Hands to Yourself” are discernible in country songs from the Nineties to the 2000s: Tracy Byrd’s “Watermelon Crawl,” Travis Tritt’s “Put Some Drive in Your Country,” Jason Aldean’s “Hicktown” and Justin Moore’s “Point at You,” among them.

“I played that song a million times in a bar,” says Moore of “Hands.” “It’s one of those songs that instantly, from the time you kick it off, people go nuts. It’s a perfect American rock & roll song.”

Stapleton says the appeal of “Hands” lies in its simplicity. “It’s got a lot of soul to it, but it’s straight-ahead. There’s no trickery about it,” he says. “It’s like, ‘Here it is, we’re going to hang it out there and be kicking your ass for the next three minutes.'”

Baird has always excelled at deceptively simple songwriting, both with the Georgia Satellites, whom he departed in 1991, and as a solo artist. He penned the chugging ode to a greasy spoon “Dunk ‘n’ Dine,” off the Satellites’ 1988 Open All Night, the same day as “Hands” (“That was a good day,” he says), and has had fun recounting tales of hard-luck lovers and unplanned pregnancies in songs like “Julie and Lucky” and “Knocked Up,” both on his 1992 solo debut Love Songs for the Hearing Impaired.

“Teenage pregnancy and teenage runaways are hysterical. It is so funny, and for whatever reason, my brain can write a modern-day short story,” he says. “It’s when I get into the Dylan word-salad stuff that I shoot myself in the foot. I do my best stuff when I’m writing a simple story front to back.”

But landing on that simple sweet spot like in “Keep Your Hands to Yourself” isn’t easy.

“Simplicity is something I still chase down over and over. It is the hardest thing to do. Elegant simplicity is just so rare and you know it when you hear it, when you read it, when you see it in a movie. What do we all love about Coen Brothers movies? They’re elegant and they’re simple,” Baird says. “[With ‘Hands’,] it was don’t get clever, don’t get smart. Be simple, be dumb. It’s not an exercise in intellectuality. I have a few deeper songs, but that’s not one of them. But it’s the one that stuck.”

As Baird vividly remembers it, the song was born on the bus, riding back from his construction job. With a head full of Carl Perkins licks and four dollars in change in his pocket — “Yes, that dumb,” he says of writing the opening lyric, “I got a little change in my pocket/going jing-a-ling-a-ling” — Baird began to fall asleep. “I thought of the yodel part as I was passing out, and I thought, ‘You better wake up. You’re on to something.’ It basically wrote itself on the bus ride home. As I’m walking the last half mile to my house, I’m going, ‘I got the thing done.’ I come in and my [now ex] wife says, ‘Hello,’ and I just hold out a hand and started writing.

“It was like God blowing in my ear. ‘Please, do it again!'” he continues. ‘No, Dan, that’s enough for you. You can make your living doing this.'”

But Baird has done more than coast on a one-hit-wonder. He had a surprise radio hit with the grammarian’s fave “I Love You Period” in 1992, released a pair of quirky, fun-forward albums with the Yayhoos, and fronted Rolling Stones saxophonist Bobby Keys’ band the Suffering Bastards until Keys’ death in 2014. In 2008, he formed Homemade Sin, the project on Baird’s résumé that best carries on the spirit of the Georgia Satellites. (Today, Rick Richards, who has played with ex-Guns N’ Roses member Izzy Stradlin, tours with his own version of the Satellites.)

Onstage later that night, Homemade Sin rip through a two-hour set of Satellites cuts, Baird solo material and songs off Get Loud, never with a set list — Baird calls for songs on the fly. One of them is the Get Loud standout “Fairground People,” about the hardscrabble folks eking out an existence in one of Nashville’s rare neighborhoods not underdoing gentrification. It’s a Southern Springsteen tale, about those born not to run, but “on the bottom rung.”

“They’re the poor white trash who didn’t finish high school. I know they’re Trump supporters and ‘white man can’t get a break’ people, but still they’re salt of the earth. I hate them and I love them,” he says. “I used to work construction surveying and I know every one of them. It’s like, ‘Must be nice to have a new 4×4, but I’ll never know.’ Or ‘Man, I got to put down this meth and get back on my roofing crew.'”

The song is a portrait not a judgment, Baird stresses. And, like “Hands,” it’s rooted in simplicity. “I introduce you to the character, tell you why he’s in the situation he’s in and then maybe look at the future,” he says.

In front of a crowd, supported by Magellan, bassist Micke Nilsson and Jason and the Scorchers’ guitar hero Warner Hodges — who acrobatically swings his instrument around his back a half-dozen times throughout the course of the show — Baird plays like it’s 1987 again, when the Satellites opened tours for Bob Seger and Tom Petty.

Eventually, he signals for “Keep Your Hands to Yourself” and tears into it with wide-eyed abandon. While it’d be easy to phone it in, the song that everyone wants to hear, Baird handles it with care. Like he said before the show, it’s helped him make his living and establish his little corner in rock and, however unlikely and reluctantly, country music history.

It’s not that Baird disapproves of the way “Hands” might have influenced country and its songs — he just wishes the guitars were louder.

“Anytime I hear something that sounds like ‘Hands,’ but L-I-T-E, I just turn it off,” he says. “It just feels ooky.”