By the early months of 1981, Elvis Costello had already released five albums in less than four years and he was quickly earning himself a reputation as the articulate, angry young man of British New Wave. His verbose lyrical swagger, witty wordplay, and unique vocal delivery that refused to pick sides between a snarl and a croon had all found a home within the melodic punk fury of his backing band the Attractions, consisting of organist Steve Nieve, bassist Bruce Thomas, and drummer Pete Thomas. However, marking a trend that would become one of the defining hallmarks of his career, Costello decided to defy expectations and switch sonic gears for his next project. The result was an album comprised entirely of country covers named Almost Blue, which celebrates its 35th anniversary this month.

As songs like “Radio Radio,” “Pump It Up,” and “Oliver’s Army” became UK hits for Costello in the late 1970s, he was growing increasingly uneasy with all the attention that was being paid to his lyrics. In a 1981 South Bank Show interview, he stated, “If you can string more than three decent syllables together, then you immediately become a poet laureate in rock and roll… I think it’s time to use a different area of what we do.” For Costello, that “different area” turned out to be a focus on the sound of his vocals – instead of just the content of his lyrics – via a foray into his not-exactly-secret, yet not-fully-explored passion for country music.

Although Costello did not grow up on country music, his teenage encounters with the iconic albums Sweetheart of the Rodeo by the Byrds and The Gilded Palace of Sin by the Flying Burrito Brothers sparked an immediate interest in the genre. The cover songs on the former inspired Costello to hunt down the Merle Haggard and Louvin Brothers originals, and the Gram Parsons songs on the latter started a domino effect in building Costello’s country catalog: his love of Gram Parsons led him to Emmylou Harris, Harris recorded one of Costello’s favorite versions of Billy Sherrill’s “Too Far Gone,” and Costello eventually ended up recording his own version of Sherrill’s “Too Far Gone” (as well as Parsons’ “How Much I’ve Lied” and ”Hot Burrito No. 1,” renamed as “I’m Your Toy”) for Almost Blue.

Before Costello’s full-on country music immersion in Almost Blue, his love for the genre managed to sporadically pop-up in a few surprising places. The most notable example of this is a 1979 duet with George Jones on the song “Stranger in the House.” Costello had originally written the song for possible inclusion on his 1977 debut album My Aim Is True, but it was rejected for sounding “too country.” The song eventually found its home on Jones’ 1979 duets album My Very Special Guests. In the lore of what Costello refers to as the “Nashville soap opera mythology,” he made the trip to Nashville to record his part of the vocals, but Jones did not attend the session because – as Costello tells it – “He couldn’t come into the state, as one of his more famous exes was looking for alimony.” The pair eventually reconvened during Costello’s next stateside tour and was able to record the duet together as intended. “Stranger in the House” was included on the bonus disc to the 2004 reissue of Almost Blue, alongside a previously unreleased duet between Costello and Johnny Cash called “We Ought to Be Ashamed,” a track Costello has called “a Johnny Cash gospel record with someone making the occasional spirited intervention in the background.” The same bonus disc holds additional rarities that didn’t make the cut for Almost Blue, including Costello covering Cash, Loretta Lynn, Stonewall Jackson and many others. 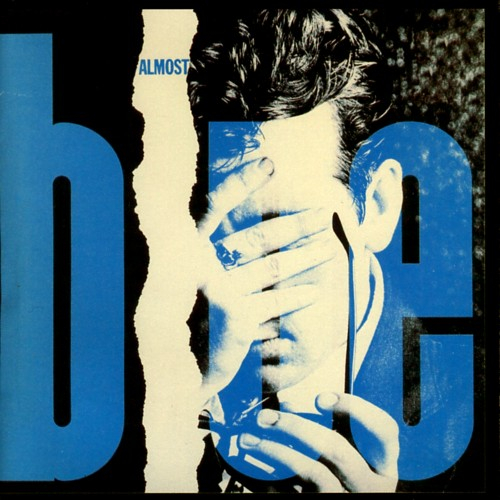 When it came time to start officially working on Almost Blue in May of 1981, Costello chose to forego his production partnership with Nick Lowe (who had produced his first five albums) and instead chose to bring The Attractions to Nashville to work with Billy Sherrill, the legendary producer and songwriter known for his extensive work with country artists like George Jones, Tammy Wynette, Charlie Rich, and Barbara Mandrell. Sherrill is also credited with being one of the architects of the Countrypolitan sound of Sixties and Seventies country music, known for its pop influences, sentimental strings, and lush background vocals. Sherrill was initially skeptical of Costello’s ability to work within the genre, telling a reporter in 1981, “I’ve only heard a few of his album cuts and a couple singles… I really wasn’t into him that much,” but eventually agreed to get in the studio with Costello and his band to see what might come of it. To help achieve a more authentic country vibe, they also invited guest musician John McFee, who had played with Costello on My Aim Is True, to play pedal steel guitar.

In the time-honored cliché of life imitating art, Costello’s personal life at the time he was recording Almost Blue was reflecting the characters and storylines of the classic country heartbreak ballads he wanted to cover. His marriage was strained to the point of near-divorce and he has previously described his part in the “tremendously hungover” recording sessions by saying “I was trying to rid the world of alcohol by drinking it.” It’s no surprise that Costello’s cover choices included songs like Merle Haggard’s “Tonight the Bottle Let Me Down,” Charlie Rich’s “Sittin’ and Thinkin’,” and George Jones’ “Brown to Blue,” all of which are sung with such a palpable conviction that you believe Costello has lived and ached inside each word he’s singing. In fact, it’s the melancholic vibe of the majority of the songs on Almost Blue that gives the album its authentic country aura. Apart from the opening track – an amped-up version of Hank Williams’ “Why Don’t You Love Me (Like You Used To Do)” that clocks in under two minutes – there are not many moments on Almost Blue that feel connected to any of Costello’s previous albums. Yet, it is that exact tension between what Costello “is doing” versus what Costello “has done” that makes Almost Blue such an important album in his catalog.

Anticipating backlash from some of his fans and the music industry at large, Costello attached a tongue-in-cheek label onto the album’s packaging that read: “WARNING! This album contains country & western music & may produce radical reaction in narrow minded people.” While this didn’t prevent Almost Blue from receiving some pretty mixed reviews – our 1981 article said “Costello doesn’t succeed with all of his choices… yet in at least three tunes, he does very fine work” – it was moderately well received by the general public, reaching Number Seven in the UK and Number 50 in the US. Costello’s cover of George Jones’ “Good Year for the Roses” was released as the album’s lead single and quickly became a Top 10 hit in the U.K.. In the U.S., its accompanying music video featured heavily in MTV’s early day as well.

While Costello’s R&B and soul-inspired fourth album Get Happy!! showed the first seeds of Costello’s willingness to deviate from his new wave roots, Almost Blue is often considered the first (of many) true departure albums in Costello’s almost 40-years-and-counting catalog, setting a strong precedent for experimentation and surprise in his approach to writing songs and making albums. Since the release of Almost Blue, Costello has sprinkled in many unconventional and unexpected albums amidst his so-called “normal” records, such as orchestral instrumentals (G.B.H.), an album of jazz ballads (North), a ballet score (Il Signo), and classical string quartet pieces (The Juliet Letters). He’s also put out collaborative albums with The Roots (Wise Up Ghost), Burt Bacharach (Painted from Memory), Allen Toussaint (The River in Reverse), and more. In the late 2000s, Costello even returned to the country spirit he had unleashed almost three decades earlier on Almost Blue with the back-to-back releases of Secret, Profane, and Sugarcane and National Ransom (both of which were recorded in Nashville).

For Costello, each new musical genre expedition unquestionably takes him to new creative places he has not visited before, while still managing to retain many of the inherent core elements of what made him such a revered artist in the beginning. While these experiments may feel like sudden left turns in the moment, they always manage to get you right back where you started even as they veer from the straight path. It’s a feat that can be easily traced back to the first yank of the steering wheel found on Almost Blue.

Elvis Costello is currently out on the road on the Imperial Bedroom & Other Chambers Tour playing selections from his 1982 album Imperial Bedroom. Backed by his band The Imposters, Costello will be hitting East Coast and Midwest cities through the early November.