Roy Orbison’s extraordinary ability to convey intense heartbreak and sensuality with a multi-octave vocal range earned him the nickname “the Caruso of Rock.” While the classical qualities of the Texas-born legend’s voice have long been acknowledged and appreciated, the new collection A Love So Beautiful: Roy Orbison With the Royal Philharmonic Orchestra infuses the singer’s remarkable original vocals with the lush, dramatic sound of one of the world’s most renowned symphony orchestras.

Out November 3rd, the LP features the original vocals from 17 of Orbison’s best-loved hits with all-new backing from one of ‘s most acclaimed orchestras. Also featured on select tracks are Orbison’s sons Wesley (guitar), Roy Jr. (guitar) and Alex (drums). Among the classic “Big O” tunes on the collection are “Crying,” “In Dreams,” “Only the Lonely,” and, of course, “Oh, Pretty Woman.”

By the summer of 1964, the music world was in the grip of Beatlemania and the British invasion, but Orbison, who had already reached Number One with “Running Scared,” was about to shake things up with the mighty growl and sensual purr of a song that has since gone on to be inducted into the Grammy Hall of Fame and enshrined in the Rock & Roll Hall of Fame as well. “Oh, Pretty Woman,” which would be a 1982 hit for Van Halen and would famously lend its name to a blockbuster Julia Roberts film in 1990, was penned by Orbison with Bill Dees. The pair had just had a Top Ten hit in the spring of 1964 with “It’s Over,” but spent three weeks at Number One with the song that is distinguished by Orbison’s playful vocal and some thrilling guitar work. Here, the orchestral enhancement adds even more passion and drama to Orbison’s raw, pleading vocal, but the song retains its relentless, driving beat amid the lush new surroundings.

Also highlighting the pre-holiday-season release is an unexpected Christmas bonus, the last-minute addition of Orbison’s affecting version of “Pretty Paper,” the modern holiday standard penned by Willie Nelson. Orbison’s original 1963 vocal track, which was recorded at Pye Studios in London, was laid down only a month after Nelson had written the song, which was inspired by the songwriter’s memory of seeing a man with no legs selling holiday-themed wrapping paper and pencils in front of Leonard’s Department Store in Fort Worth, Texas. The man, later identified by the Fort Worth Star-Telegram as Frankie Brierton of Santo, Texas, would call out, “Pretty paper!,” to passers-by. Orbison, who was suffering from 102-degree fever at the time of his recording, delivered a memorable and enduring performance.

Also featured on the new collection is an alternate version of “I Drove All Night,” a virtual collaboration between Orbison and British country duo Ward Thomas, which consist of 23-year old twin sisters Catherine and Lizzy Ward Thomas. The tune, which was originally recorded by Orbison in 1987, has subsequently been covered by Cyndi Lauper, Celine Dion and country group Pinmonkey.

Also coming this fall is the October 17th release of the first ever estate-sanctioned Roy Orbison book, The Authorized Roy Orbison, written by Wesley, Roy Jr. and Alex Orbison with the help of Jeff Slate. Featuring more than 300 photographs, many never before seen, the book spotlights Orbison as a young child, following him all the way through to the peak of his stardom and up to his tragic death in December 1988 at just 52 years old.

A Love So Beautiful: Roy Orbison with The Royal Philharmonic Orchestra is now available to pre-order. 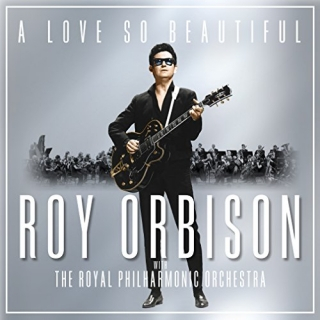 A Love So Beautiful: Roy Orbison with The Royal Philharmonic Orchestra track list: