Opening to the strain of chunky, menacing guitars, the title track of Gretchen Peters’ Blackbirds is one of the most affecting murder ballads since Bruce Springsteen’s “Nebraska” left a trail of corpses strewn across the American landscape in the early Eighties. The two victims in “Blackbirds” aren’t the first she’s written into one of her tunes, and it’s not really clear what they’ve done to deserve their sad fate at the narrator’s hands, but the results are par for the course when it comes to the Nashville Songwriters Hall of Fame member. Peters is perhaps best known for the chilling – and ambiguous – “Independence Day,” which earned her a CMA Song of the Year trophy and has become a signature song for Martina McBride.

Blackbirds is Peters’ latest solo album and the follow-up to 2012’s disarmingly honest Hello Cruel World; it offers a deeply personal platform for a tunesmith whose songs have also been recorded by Trisha Yearwood (“On a Bus to St. Cloud”), Faith Hill (“The Secret of Life”), George Strait (“Chill of an Early Fall”) and Patty Loveless (“You Don’t Even Know Who I Am’), among others. The title track of the new LP, she says, offered her an irresistible proposition.

“I was intrigued with the idea of writing a murder ballad,” Peters tells Rolling Stone Country. “When I have those sort of generic thoughts that are more themed, I usually just wait. It’s like kind of planting a seed. Eventually, the song will manifest itself.”

Although the Pelham, New York, native has garnered a reputation as a solo songwriter, in more recent years she has found herself collaborating with other writers and musicians, including Ben Glover, who’s from the small village of Glenarm on the Irish seaside – a far cry from the tune’s southern Louisiana setting.

“It was the first song I wrote with Ben,” Peters says of the title cut. “He had been on the road with us for three tours, so we have a lot of comfort level together because we knew each other well. But it was quite a thing to dive in to the first song we wrote together and have it be that. But he’s an Irishman; they’re constitutionally built to handle that sort of stuff.”

Peters recalls that “Blackbirds,” unlike many of the songs she writes, was written in a linear fashion, and that the two approached it as if solving a crime, hunting down clues like Holmes and Watson, although another literary figure guided her approach while constructing — and then deconstructing — the clues.

“When you write a song like that and it’s a little bit murky, you have to know in your mind what’s happening,” she says. “But it’s like Ernest Hemingway’s iceberg theory. You have to leave a lot of it submerged, but you have to know what that submerged part looks like in order to write with any kind of impact and truth.” 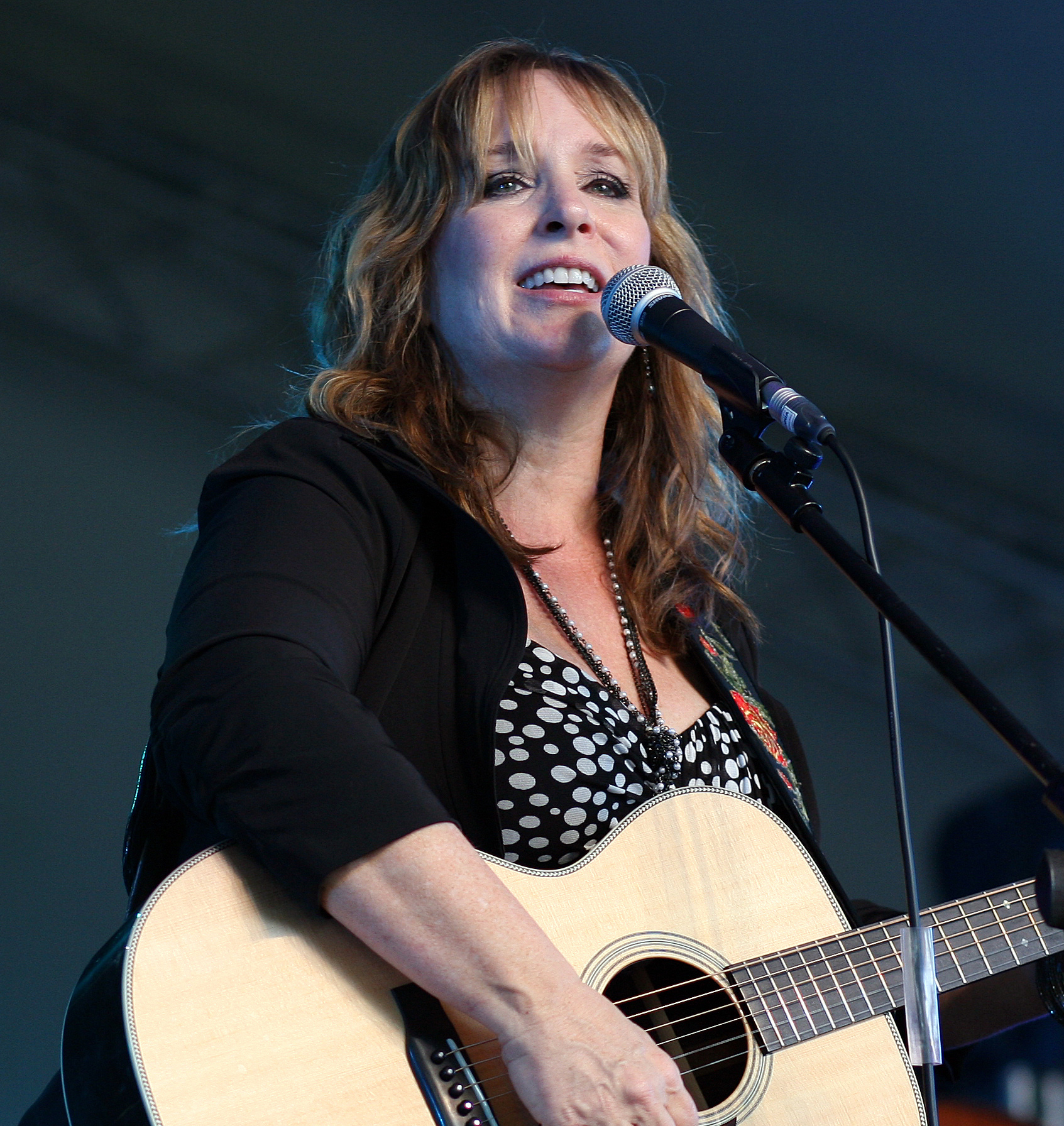 Impact and truth are the hallmarks of many of the songs Peters has written, recorded herself and had cut by others. “Independence Day” is her most famous – and one that, in part because of its title, has become a post-9/11 anthem. But the vast majority of songs she has penned since arriving in Nashville in the mid-Eighties have skillfully captured the glorious highs and devastating lows found in everyday situations, leading to her induction into the Nashville Songwriters Hall of Fame in 2014.

The majority of the songs on Blackbirds, Peters says, sprang from a series of events and realizations that were occupying her life and her mind at the time she began writing them.

“It was having a parent who is in her 90s. The first summer that Ben and Mary [Gauthier] and I were writing songs, I had this little writing room that overlooks our neighbor’s garden. My neighbor was in his 80s, and he died. Ben and [his wife] Emily were getting married. It all conspired to where there was this one week I ended up going to Ben’s wedding and three memorial services, for this neighbor and a couple of friends. It hit me like a ton of bricks: ‘This is how it is now.’ There was a time in my life when I would go to a couple of weddings in a week maybe. But now I go to these three memorial services and in the middle of it there’s this wedding, thank goodness! It’s just reality. I wanted to deal with it.”

As grim as Blackbirds’ subject matter can be, the overriding theme of Peters’ previous album, Hello Cruel World, had her staring down some even starker realities. The transition from one record to the next wasn’t lost on her.

“I thought, ‘Oh great, so you write this sort of existential crisis album and now it’s going to be death. Who’s going to be interested in that?’ That conversation in my mind takes about 30 seconds and then it’s, ‘Yeah, but that’s what’s going on, so you’re going to be dealing with it.’ It’s not like you sit down and say, ‘I’m going to write 11 songs about death.’ You write the songs and then they manifest themselves. Themes become apparent. It’s not really my choice. It was just hanging around and it’s a really interesting subject. It’s the big ones, love and death — what else you got? I think I’m in a unique position to be able to not give a shit what people think. Who’s going to stop me?”

That attitude served Peters well in 2011 when she wrote a brutally honest piece for the Huffington Post, revealing for the first time publicly that she is the mother of a transgender child. Not surprisingly, in it she captured the same delicate details and universal truths found in her songs.

“Who better than me?” she says of her decision to pen the powerful and deeply personal essay, which she did with the full cooperation and blessing of her son, who first shared his truth with her in 2010. “I’m a non-threatening person to talk about what it means to be transgender. I’m a white, middle-class mom, middle-aged lady. Not an outward threat. I’m someone that someone from the mainstream who’s never come close to touching the subject could look at and say, ‘Well, she seems OK.’ Once you have a child who’s dealt with that and fought so, so hard to want to be alive, even – that was something that I could do to make the world a kinder place for people like my kid.”

Coming to terms with a transgender child was one of the life-altering events that informed Hello Cruel World, just as contemplating the mortality of those around her was a catalyst for creating Blackbirds. Peters’ songs have always been intimate and personal, perhaps in part because she has generally written them herself by herself; when she began her writing career in Music City, Peters generally avoided the co-writing dynamic, a longstanding Nashville tradition. (Her latest LP features more co-written material than any of her previous albums.)

“When I first got to town I thought there was something wrong with me that I didn’t get into this co-writing thing,” she explains. “It took me long enough but I finally figured out that I have to have a seriously deep level of trust. I think that’s why I couldn’t co-write in the way that a lot of people do here. I always felt like that was kind of like going on a blind date naked. It was so incredibly awkward and uncomfortable. So I just didn’t do it.”

Although she’s always been a more solitary writer, Peters has cultivated close relationships with many of her fellow musicians throughout her career and called on some of them to contribute to Blackbirds, including Jason Isbell, who sings with her on “When All You Got Is a Hammer,” the heart-wrenching tale of a decorated war veteran who faces fear and alienation on his return home. Other guests on the record include Suzy Bogguss, Kim Richey, Jimmy La Fave (on the plaintive and gorgeous “When You Comin’ Home”) and Dobro legend Jerry Douglas.

“We had two tracking days in the studio and we had a bigger band than I’ve ever had on the floor before,” Peters says of the recording process. “We had seven people on the floor tracking, which is a huge amount of people. Normally it would be four or five. So, what I was hearing in my headphones sounded really complete. It wasn’t just bare bones, it was this big band. That was intentional in the sense that I wanted to get as live of a recording as we could get. It inspired me just hearing all that great sound coming back at me in the headphones, and it inspired me to sing like it was a performance rather than just like I’m laying down the song. I ended up keeping five or six of the track vocals. I wanted them to be somewhat raw because the songs were raw.”

While that rawness might dissuade some listeners from exploring Blackbirds, that would be an enormous mistake. As difficult as the album’s themes of death and darkness may be, Peters handles them with extraordinary aplomb. Disturbing subjects that others might avoid are endlessly fascinating to her.

“I’m just really interested in what goes on internally with people that makes them do bad things or hurt each other,” she reasons. “There’s a little bit of something in me, and I haven’t really examined it, but there is a little bit of revenge fantasy that seems to thread its way through my work and rear its head from time to time. Human nature is really fascinating to me – why people do what they do and what their internal process is. What’s going on in there? Like Tom Waits says, ‘What’s he building in there?'”