Any film about superstar entertainer Glen Campbell would, by its very nature, tend to be extraordinary. But Glen Campbell: I’ll Be Me, a film exploring the devastating effects of Alzheimer’s disease, which affects some five million Americans over the age of 65, including the 78-year-old singer, could have been a much trickier proposition. By putting the project in the capable hands of producer James Keach (who also produced the Oscar-winning 2005 Johnny Cash biopic, Walk the Line), however, Campbell’s family has ensured that the conversation about the debilitating disease will continue and will, most importantly, evolve. The film, which opens in New York and Nashville today (October 24th), will soon expand to 50 theaters nationwide. A poignant chronicle of Campbell’s Goodbye Tour (featuring dozens of his most memorable songs) and the ongoing medical treatment which followed his diagnosis in early 2011, I’ll Be Me captures unguarded moments between the musician and his family members as they come to terms with a future in which, as the final song he recorded in his stellar career underscores, he declares, “I’m Not Gonna Miss You.” As heartbreaking as it is uplifting, for anyone touched by the dreaded disease, I’ll Be Me may be difficult to watch at times, but it’s also warm, funny, and full of the music that defined a generation and turned a young prodigy into an international sensation.

Glen Campbell's Final Song to Be Released This Month

With a career that spanned six decades, Glen Campbell was, without question, one of the most influential country-pop artists of the last half of the 20th century. Born in the tiny Billstown community near Delight, Arkansas, in 1936, the seventh son of 12 children was already a supremely gifted (and underage) guitarist when he briefly relocated to Casper, Wyoming, with his uncle “Boo” to play in a nightclub. This was followed by a stint in Albuquerque to join Dick Bills (another uncle) in his band, the Sandia Mountain Boys. By the early 1960s, Campbell was working as a session musician in Los Angeles, where his guitar work was heard on records by Merle Haggard, Frank Sinatra, Dean Martin, Nat King Cole, Elvis Presley, the Righteous Brothers, the Monkees and the Mamas and the Papas, among countless others. He was also a member of the Beach Boys, filling in for Brian Wilson on tour in 1964 and ’65.

Signed to Capitol Records in 1962, it would be five more years before he would break onto the country charts, but when he did the results were impressive, to say the least. While the early hits were plentiful, including “Gentle on Mind,” “Wichita Lineman” and “Galveston,” their crossover appeal secured pop radio airplay but also made the affable entertainer a TV star who hosted his own CBS variety series from 1969 to 1972. The Glen Campbell Goodtime Hour spotlighted not only his own talents but also featured many of his fellow musicians in a homey, casual atmosphere. Writers on the show included a couple of future stars, actor-director Rob Reiner and comedian-musician Steve Martin, who is among the numerous celebrities featured in I’ll Be Me. Also appearing in the film are Paul McCartney, Brad Paisley, Keith Urban, and U2 guitarist, The Edge, among others. (See an exclusive film clip featuring Martin and Urban below.) Many of the famous participants also reveal personal stories about how Alzheimer’s has touched their lives. But it is, naturally, the Campbell family’s own struggle with how the disease has altered the man they love that is at the heart of the documentary. Glen’s fourth wife, Kim (they will celebrate their 32nd wedding anniversary October 26th), and the couple’s three children together, daughter Ashley, and sons Shannon and Cal, along with other Campbell family members appear in the film, and although Kim says there was a little discomfort with the cameras initially, they all adjusted to the idea fairly quickly.

“Glen’s always been open and honest about his life and everything that’s happened to him and its journey in his faith,” Kim Campbell tells Rolling Stone Country. “We have a great family and we love being together.”

After receiving the Alzheimer’s diagnosis, Kim and her family moved beyond their fear and decided to share the difficult journey with Campbell’s fans so that the film could be a learning experience.

“I was afraid of Alzheimer’s,” she says. “When we got the diagnosis it scared me. I didn’t know what to expect. I think a lot of people want to hide the fact that you have Alzheimer’s. We just felt like Glen was doing really good and we just wanted to keep living our lives and celebrate being together. If you don’t have anything to hide, you’re not worried.” 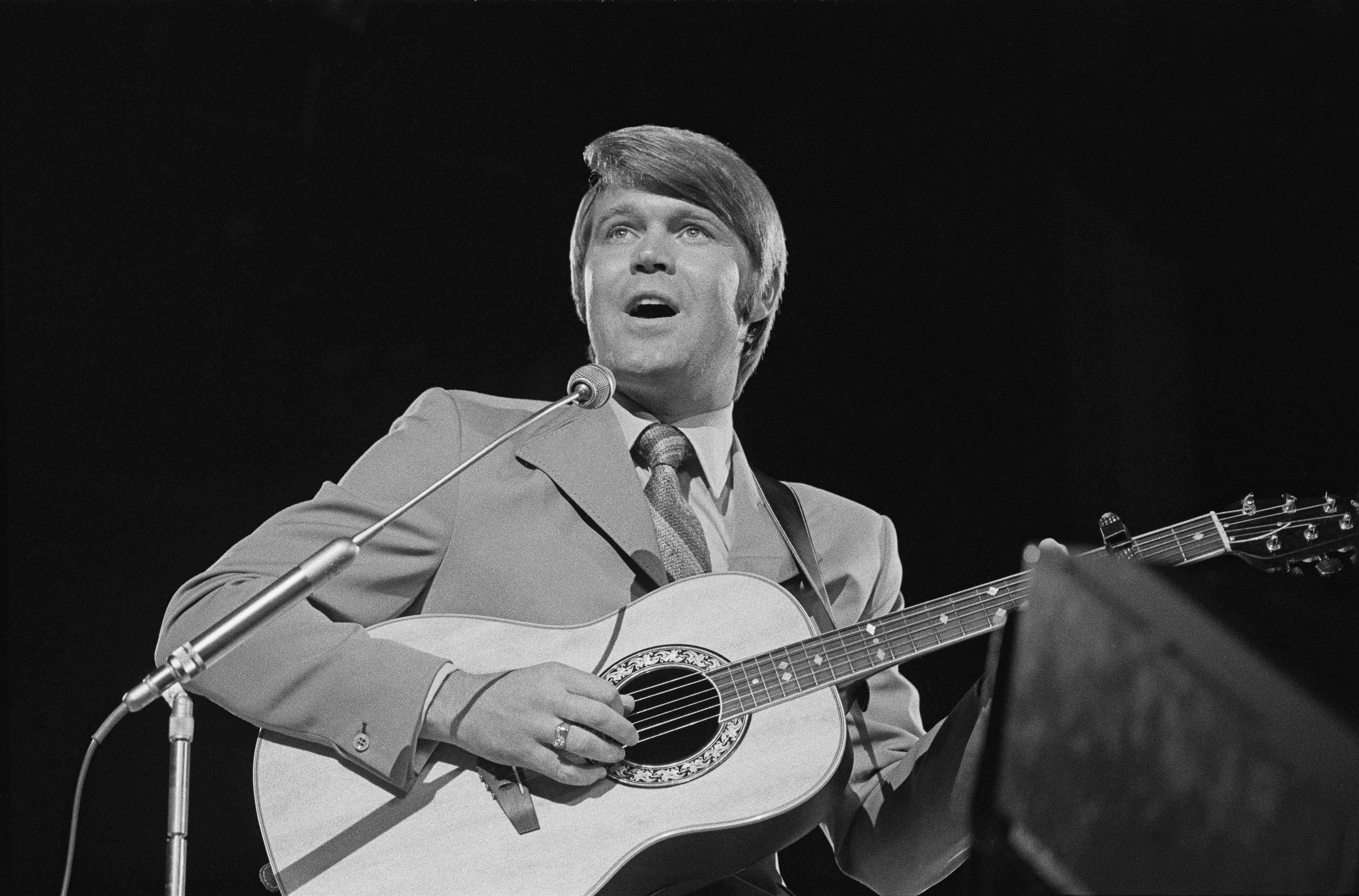 One aspect of his character that remains clear through the film is Campbell’s sense of humor. Although at times it’s obvious he’s using humor to mask his symptoms, he also remains charmingly self-deprecating.

“He’s kind of guy that can laugh at himself,” says Kim. “He’s never been puffed up or full of himself or trying to be pretentious. He still has a sense of humor today even in stage VI of Alzheimer’s. He’s trying to tell jokes, and if they don’t make sense it doesn’t matter because he thinks it’s funny. And then when he laughs, we laugh.”

“He’s always proud of a burp,” adds Ashley, who began playing banjo and singing on tour with her dad in 2010. Son Shannon played guitar while Cal played drums. The interaction with his children onstage, while at times in the film is seen as tense and difficult due to the weakening of his memory, is also heartwarming and reassuring. His family continues to visit on a regular basis at the Nashville memory-care facility which he entered earlier this year, and music remains a part of their time with him as well as a major aspect of his daily therapy.

“Shannon was there playing for him the other day,” Kim says.” And he started humming some tunes [Shannon hums the classic opening line of ‘Wichita Lineman’], which surprised us because that comes and goes, too.”

“It’s been a while since he remembered any specific melody to one of his songs,” explains Ashley. “I’ll go there and play for him a decent amount. He’ll smile and listen and drift off to sleep.”

Kim says she realized as the filming of the documentary got underway, it was not only beneficial for the family, but for Campbell himself.

“Music utilizes all of the brain, not just one little section of it,” Kim notes. “Everything’s firing all at once. It’s really stimulating and probably helped him plateau and not progress as quickly as he might have. I could tell from his spirits that it was good for him. It made him really happy. It was good for the whole family to continue touring and to just keep living our lives. And we hope it encourages other people to do the same.”

To record “I’m Not Gonna Miss You” for the film, Keach assembled members of the Wrecking Crew, Campbell’s fellow A-list studio musicians whose session playing was a staple of the Sixties L.A. music scene. Although the recording of the song proved challenging, it also offered the occasional spark of recognition and excitement from Campbell.

“When they started talking about the old days, how Glen was kind of the leader of all of those guys, they would prompt him, ‘Do you remember that song? Do you remember that?'” Keach says, adding that Campbell would excitedly reply, “‘Oh, yeah!’ I think he would see them all as young guys.”

The wide range of musicians in the film who express their love and regard for Campbell and his musical influence is nothing new, his wife says. “They come from all spectrums and genres. Back when Ashley and Shannon were in high school, the guitar players from Stone Temple Pilots, Dean and Robert DeLeo, came out to our house and recorded some stuff with Glen, and we’re just like, we’re not worthy. They just loved his guitar playing so much and respected him so much as a musician, if it’s country or rock or whatever.”

“I thought it was amazing when we were on tour, the people who would show up at the shows and watch and just kind of see him play one last time,” says Shannon. “Brad Paisley came to the show came backstage and talked to us. It was just amazing the people that got to be in the documentary, too.”

Ashley also says she was surprised to find out that a lot of celebrities in the film have family affected by Alzheimer’s as well. “A lot of times you don’t even know that, that it affects so many different people.”

Their strong Christian faith has played a major role in the family’s journey, especially since the diagnosis.

“When you have a loved one that has Alzheimer’s, most family members understand that it’s a really sad thing to watch somebody losing their memories,” Kim says. “That’s what you hope you can spend your later years sharing with someone, your memories. It’s not just memories, it’s the ability to reason and think. So, you’re really losing them bit by bit. It’s really depressing. So I rely very heavily on my faith and my relationship to God. I get up and I pray for strength in the morning to get through the day and that the Lord will enable me to be a blessing to others. It is more blessed to give than to receive, and it’s a very fulfilling thing to be a caregiver.”

As for Campbell’s current daily routine at the memory-care facility, there is plenty of physical activity, including exercise classes, along with grooming regimens and mental activities designed specifically for Alzheimer’s patients to challenge and stimulate different parts of the brain.

“There might be music therapy or talking about current events,” Kim says. “They have entertainment, there’s lunch… and naps. I go every day and I still personally care for his hygiene and dressing and just sit with him and watch some TV and laugh, go on walks and stuff like that. He’s pretty content and he enjoys the other residents because it’s a memory-care community. It’s not a nursing home. It’s about community. It’s like an extension of our home. They’re part of my family and the aids down there are just great. They love Glen. They’ve heard the new song and they’re all just weepy-eyed over it. They’re so protective over him and they just adore him. Even in his Alzheimer’s, he has an awareness of God. He says, ‘Thank you, Lord,’ and he goes around and he grabs little old ladies hands and says, ‘You’re precious.’ He’s OK. He’s not gonna miss you.”