With a Cheshire Cat grin, Leftover Salmon’s Vince Herman stood in front of a microphone at FloydFest in the wee hours of Saturday morning, basking in the moment. “It ain’t anybody’s first rodeo around here,” the singer-guitarist chuckled to the roar of the hardcore crowd.

Indeed, in its 19th installment, FloydFest has been around the block, but somehow it’s maintained its place as one of the best-kept secrets on the national festival circuit. Situated on a mountaintop in rural southwest Virginia, the event is tucked down a dirt road just off the winding Blue Ridge Parkway. You have to look to find it, and that’s kind of the point.

But those who do find their way to the fest are well-rewarded. With a 2019 theme of “Voyage Home,” the independent festival and the property on which it’s held have become a refuge of sorts for longtime musicians and fans alike. This year, the focus was squarely on groundbreaking string bands, but some Americana favorites came close to stealing the show. Here are the 10 best things we saw at FloydFest 2019.

Tyler Childers
Singer-songwriter Tyler Childers kicked off his barnstorming Friday evening set on the Dreaming Creek Main Stage with “House Fire,” a track off his upcoming album Country Squire and a departure from his recent set-opener, “Whitehouse Road.” His band was a well-oiled machine, chugging along with freight-train strength right behind him. As Childers continues his rise to arena-level entertainer, he’s transforming onstage too — becoming even more confident and in command of the audiences who hang on his every lyric.

Mountain Heart
Bluegrass favorites Mountain Heart paid tribute to the Allman Brothers Band Sunday afternoon, rumbling through the Southern rockers’ sprawling catalog. Arguably one of the finest pickers in Nashville, guitarist Seth Taylor stretched out during “Blue Sky” and “Midnight Rider,” with keyboardist Josh Shilling (on the Hammond B3 organ) channeling his inner Gregg Allman for a rollicking “Dreams.”

Margo Price
Returning to the road after a break to welcome her new daughter, Margo Price was a vision on the Dreaming Creek Main Stage late Sunday afternoon. With her sturdy set of blue-collar hymns, Price and her backing band routinely combined into a single entity of sound and purpose, notably on “Nowhere Fast.” Most remarkably, the sad, sorrowful “Hands of Time” remains a revelation three years since its release on Midwest Farmer’s Daughter, with Price singing something no one else could: her real-life autobiography.

String Cheese Incident
The jam-band powerhouse closed out its summer tour on Saturday evening, with guest appearances by Leftover Salmon in the first set (“High on a Mountain Top,” “Reach”) and Keller Williams in the second (“Best Feeling” > “Exodus” > “Best Feeling”). For an act now a quarter-century in its existence, Cheese is hitting another high-water mark — a space inhabited by as much sonic experimentation as nods to its traditional acoustic roots. Ending with “Colorado Bluebird Sky,” the group exited the stage, the words “Colorado bluebird sky, you can live a mile high” echoing throughout the evening.

The War & Treaty
Fronted by husband-and-wife duo Michael and Tanya Trotter, the soul-rock group the War & Treaty took the audience assembled at the Streamline Stage to church on Friday evening. Backed by a seasoned rhythm-and-blues band, the couple’s blend of Motown and contemporary pop sensibilities echoed across the festival grounds, particularly during a sweat-inducing “Just for Me” that showed off the Trotters’ rich vocal blend. 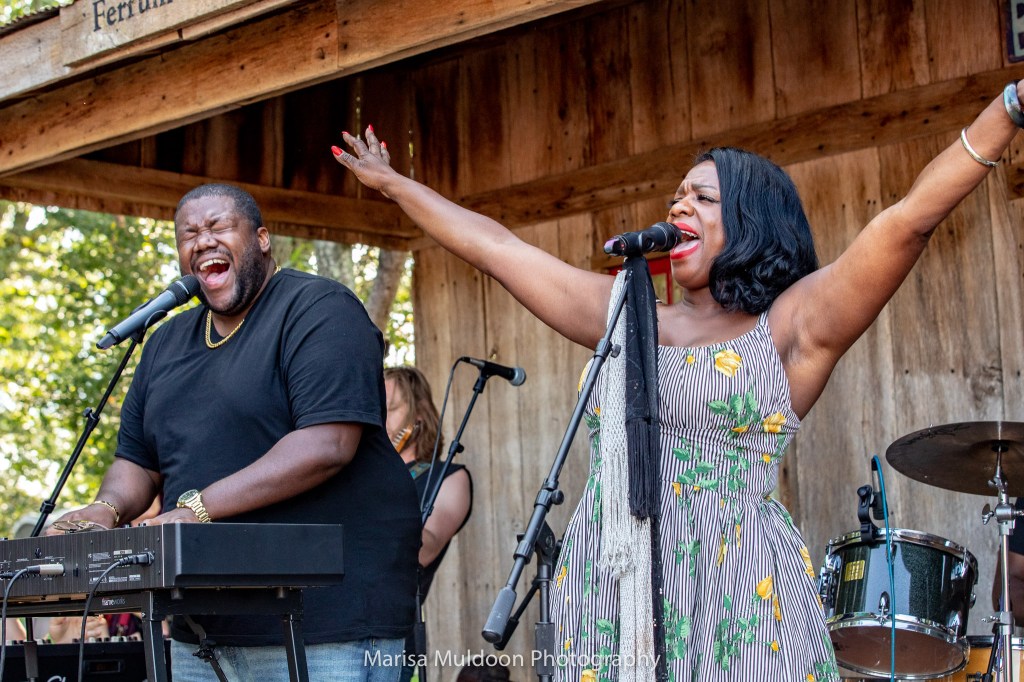 The War and Treaty (Marisa Muldoon)

Travers Brothership
Performing five sets throughout the weekend, the Travers Brothership ripped into seemingly every stage at FloydFest, with guitarist Kyle Travers displaying raw talent and six-string exploration in equal measure. Alongside his twin brother, drummer Eric Travers, the siblings and their two childhood friends revealed a mature sense of self (as seen during a spirited take on Santana’s “Soul Sacrifice”), something not lost on a band of 20-somethings already a decade into their career.

Jon Stickley Trio
Under a canopy of trees, Jon Stickley Trio took to the Pink Floyd Garden Stage Saturday afternoon for a rollercoaster presentation of acoustic instrumentals and elaborate improvisations. Stickley pushes the tone into the fringes of progressive bluegrass and folk-rock, often crossing over into avant-garde jazz (as during “Animate Object”) that sits at the crossroads of Tony Rice and Kaki King — a location at which Stickley is very much at home.

Buffalo Mountain Jam
Guitarist Keller Williams was a musical mad scientist late Saturday night, tapping the shoulders of any musician within reach to play a tune, take a solo, or offer any spontaneous action that worked in the moment on the Streamline Stage. A rotating cast of performers covered a wide selection of tunes (“Get Back,” “Take the Long Way Home,” “Naïve Melody”), including Steve “Big Daddy” McMurry’s incendiary, wailing version of Junior Parker’s “Mystery Train.” The jam reached its peak when Erin Lunsford (of Erin & the Wildfire) howled into the heavens during “Country Roads” and Caitlin Krisko (the Broadcast) soared on a riveting version of “The Letter.”

Hot Tuna
Playing together since 1958, Hot Tuna guitarist Jorma Kaukonen and bassist Jack Casady offered a set of acoustic blues melodies. Towards the end of their porch-stage performance, the pair slid into Rev. Gary Davis’s haunting “Death Don’t Have No Mercy,” the performance’s spooky atmosphere benefiting from a venue that borders a nearby cemetery and the rolling hills of Floyd County.

Leftover Salmon
With guitarist Vince Herman and multi-instrumentalist Drew Emmitt at the helm, Leftover Salmon remain a melting pot of bluegrass, Americana, and rock & roll. With a late-night set on the Devil’s Backbone Throwdown Stage, the infamous jam-grass pioneers could whip the audience into a manic frenzy at a moment’s notice — as when violinist Lyndsay Pruett (of the Jon Stickley Trio) hopped onstage for “Bird Call.” Thirty years into their career, Leftover Salmon only seem to be getting better with age.