When Jane Fonda, who had formed her own film production company in the late Seventies, began work on the company’s third project, 9 to 5, it was slated to be a drama about the slowly changing role of women in the workforce. Concerned about the subject matter coming off as too “preachy,” Fonda, who had wanted to collaborate with actor and stand-up comic Lily Tomlin, had the script rewritten and turned into a comedy, adding a third ingredient to the lead cast that would help country superstar Dolly Parton become a global entertainment icon, and an Oscar nominee.

While the film was a critical success and a box-office hit by the end of 1980, another aspect of its production that became important to first-time actress Parton was the title song, which the singer-songwriter penned on the set. Parton, who had memorized the entire script because she thought the scenes would be shot in that order, found herself beset by boredom during the long stretches between takes, so she began composing the song that would become not only a country smash but her first Number One pop tune. In a production meeting one morning, she began recreating the typewriter sound that would be heard on the record by brushing her long, manicured (and artificial) fingernails together. At a 2006 celebration of the film’s special 25th anniversary DVD release, Fonda’s business partner, producer Bruce Gilbert, recalled Parton saying, “You’ve got to use falsies for this… and fingernails, too” as she auditioned the song for them.

Released as a single just a few weeks before the film hit theaters and proved to be a blockbuster, “9 to 5” reached the Number One spot on the country chart on January 24th, 1981, becoming Parton’s 13th solo chart-topping single there. On the pop chart, the tune was Number One for two non-consecutive weeks and the first single by a Nashville-based female country artist since 1968’s “Harper Valley P.T.A.” by Jeannie C. Riley to top Billboard‘s Hot 100. Parton reached the apex again two years later with “Islands in the Stream,” her duet with Kenny Rogers. A female country act wouldn’t hit Number One again until Taylor Swift and “We Are Never Ever Getting Back Together” in 2012 —  although that single was remixed, accordingly, for pop and country radio.

On March 31st, 1981, the 53rd annual Academy Awards ceremony was held in Los Angeles, hosted by Johnny Carson. Planned for the previous day, the event was postponed after an assassination attempt on President Ronald Reagan. Country music was enjoying a surge in popularity at the time, as the Urban Cowboy craze took John Travolta from the disco floor to Gilley’s, the world’s largest honky-tonk, and the genre would be well-represented on the Oscars’ global telecast. Coal Miner’s Daughter, the Loretta Lynn biopic starring Best Actress nominee (and eventual winner) Sissy Spacek, scored a Best Picture nod and was one of the year’s most-nominated films. In the Best Original Song category, two films, and two of the genre’s most visible personalities, were singled out as Parton’s “9 to 5” competed against Willie Nelson’s “On the Road Again,” from Honeysuckle Rose. Nelson, who sang and acted in that film, would perform the song twice on the Oscar telecast, once in 1981, then again four years later.

In the above clip, Parton, dressed in a black sequined gown, bounds onto an Art Deco-inspired set, backed by male dancers. In keeping with the theme of both the song and the film, Parton is initially flanked by a trio of dancers who mimic hard labor (although the audience could have easily mistaken them for members of the Village People). More dancers join in as Parton sashays across the stage like country’s answer to Mae West, her right leg exposed by the thigh-high slit in her gown. It’s a joyous, dynamic and very much live performance from Parton, in spite of the hopelessly dated dance moves going on around her. It’s also worth noting the glaring omission of any women (other than the star herself) on stage, which probably would have gone unnoticed if not for the word “UNITE” splashed across the set’s backdrop. 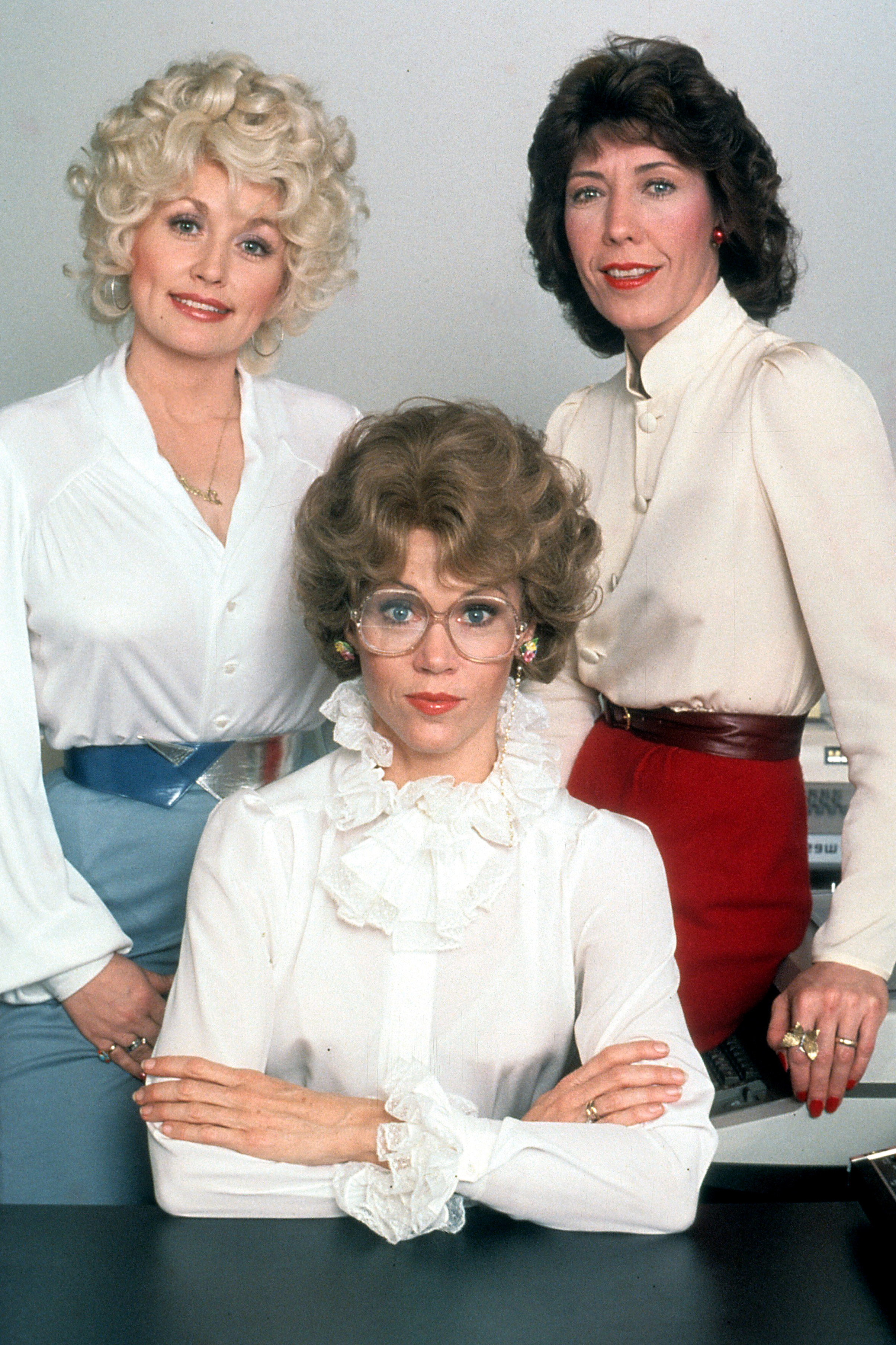 “9 to 5” lost the Oscar to the theme song from Fame, but Parton would again be nominated in the Best Original Song category for “Travelin’ Thru,” from 2005’s Transamerica, losing to the Three 6 Mafia’s “It’s Hard Out Here for a Pimp,” from Hustle and Flow. She also sang (but didn’t write) the 1994 Oscar-nominated “The Day I Fall in Love” with James Ingram from Beethoven’s 2nd. And 10 years earlier, in 1984, she would be on hand (with her Rhinestone co-star Sylvester Stallone) to present Robert Duvall with his Oscar for Best Actor in Tender Mercies, in which he played a country singer.

Parton’s acting debut also earned her a pair of nominations and “9 to 5” was nominated for Best Original Song at the Golden Globes. In early 1982, she earned two Grammys for the tune and in 2011 was given the Grammy Lifetime Achievement award. The film became a Tony-nominated Broadway musical in 2009. Although a sequel has long been proposed, it has yet to come to fruition, but (spoiler alert) according to the film’s epilogue, Parton’s character, Doralee Rhodes, quits the 9-to-5 grind to pursue a career in country music.