For nearly the same number of years that the Eagles have been together, fusing country and rock and becoming one of the best-selling, most popular bands of all time, the Grand Ole Opry House has been home to country music’s longest-running live radio show. On Sunday night, at a special invitation-only event for Sirius XM subscribers, those two worlds converged as the Eagles, with new touring member Vince Gill, a bonafide Opry star, played their first-ever concert at the hallowed hall.

In a blazing two-hour set that opened with the chilling harmonies of “Seven Bridges Road,” Don Henley, Joe Walsh, Timothy B. Schmit and longtime touring guitarist Steuart Smith, along with Deacon Frey, son of the late Glenn Frey, and Gill ran through nearly two dozen of the band’s best-known hits, staples of AM, FM and now satellite radio. Walsh also took the spotlight for solo tunes, including the decadent rock-star anthem “Life’s Been Good,” the trippy “Rocky Mountain Way,” a part of the group’s second encore, and the James Gang classics “Walk Away” and “Funk #49.” But if this was anyone’s night, it was Gill’s, whose wife, singer Amy Grant, grinned gleefully and danced along to the group’s fiery “Life in the Fast Lane.”

“Pretty good new band I play with,” Gill joked, adding, “It’s very strange for me to hear anybody’s voice but Glenn’s sing these songs.” He dedicated his touching performance of the band’s 1977 Number One “New Kid in Town” to the younger Frey, who took the lead on the group’s early country-tinged numbers “Take It Easy,” “Peaceful Easy Feeling” and “Already Gone.” Gill took the lead on the Eagles’ biggest crossover hit, 1975’s “Lyin’ Eyes,” as well as “Tequila Sunrise” and 1980’s “Heartache Tonight,” the group’s last Number One single before their 14-year hiatus. 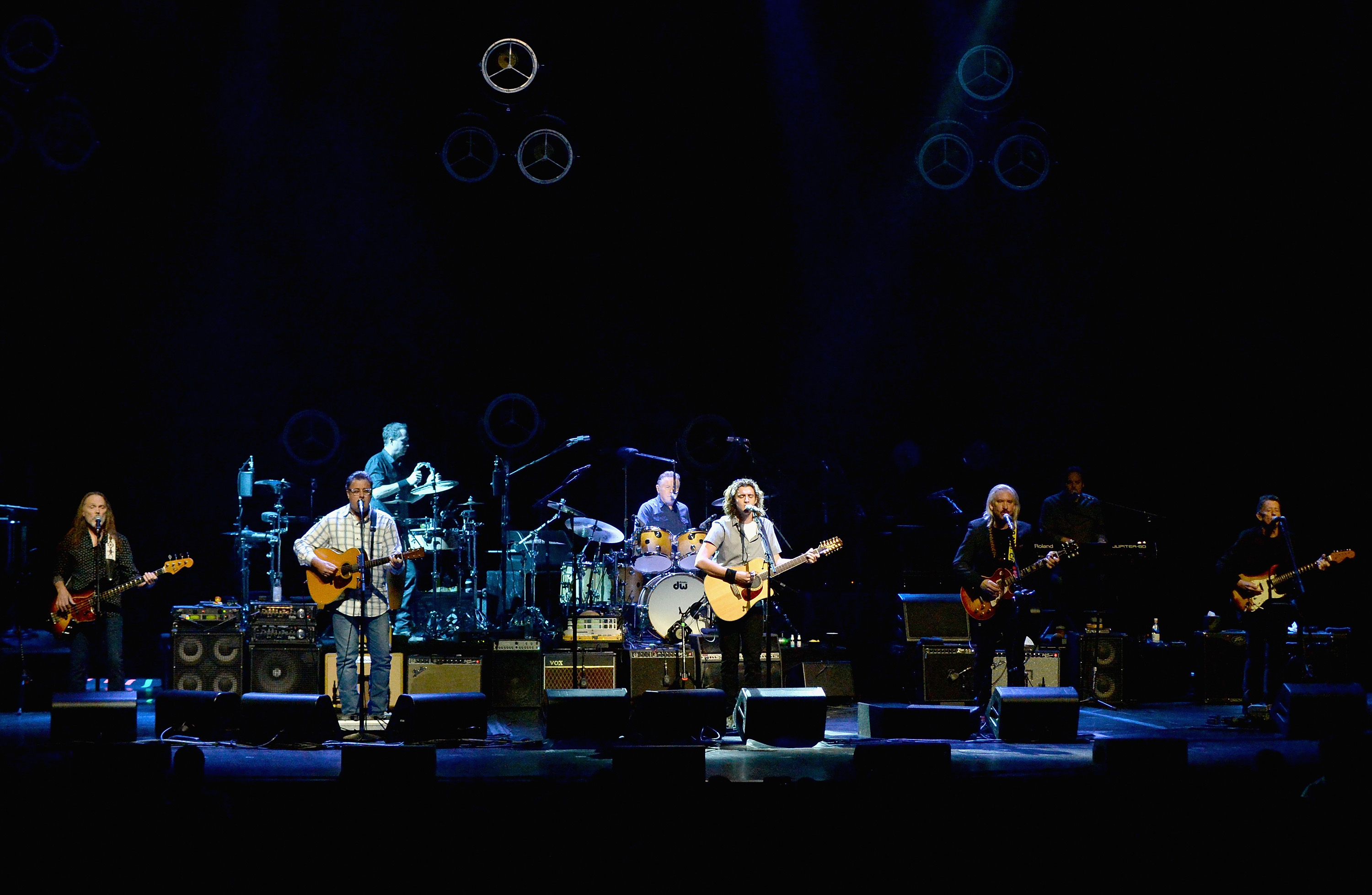 Schmit, who referenced the lengthy break before the group’s cheekily titled 1994 reunion LP Hell Freezes Over, sang a lilting version of “I Can’t Tell You Why,” the first song he contributed to the band when he joined in the late Seventies. Interestingly, it was Gill who contributed a cover of that tune from The Long Run to Common Thread, the 1993 tribute album credited with finally bringing the Eagles back together. Schmit also sang a tender “Love Will Keep Us Alive,” one of the new studio recordings from the predominantly live Hell Freezes Over.

Curiously, the group completely neglected material from their most recent pop- and country-chart-topping album, 2007’s Long Road Out of Eden. However, in spite of selling seven million copies and winning two Grammys, that LP contained no major hits, whereas this recent tour’s set list has leaned heavily on the group’s mighty catalog of familiar and, based on the crowd’s wildly enthusiastic response, beloved singles. In addition to Mrs. Vince Gill, other country luminaries were in attendance for the special event, commemorating the upcoming Sirius XM Eagles channel, Hotel California, and celebrating that landmark album’s 40th anniversary. Reba McEntire, Sheryl Crow, the Oak Ridge Boys, Ronnie Dunn, Nashville actor Charles Esten, the members of Old Dominion and Midland, Mickey Guyton, Sara Evans, Frankie Ballard, Jon Pardi and various label executives were all spotted in the crowd.

While the majority of songs performed throughout the night stuck to the arrangements first heard on the group’s mega-million-selling albums, right down to the guitar solos, one that deviated a bit was “Witchy Woman,” punctuated by a horn section. “Happy Halloween,” quipped before taking the mic to sing, managing to acquit himself quite nicely throughout the rest of the evening after a raspy version of “One of These Nights” early in the set. Still, the night belonged to hometown hero Gill, whose new role in one of the most celebrated bands of all time, was clearly a source of pride for his fellow Nashvillians.

The concert will air on Sirius XM’s Hotel California when the channel launches in mid-November.