Mike Cooley only needs five words to describe Drive-By Truckers’ decision to surprise-release their new album, The New OK, during quarantine. “It’s all we can do,” he says on three separate occasions during an interview with Rolling Stone about the band’s 13th record, out this Friday.

The veteran songwriting duo of Cooley and Patterson Hood, who have spent the past six months stuck in their respective homes in Alabama and Oregon, are upfront about the difficulties of maintaining a touring band during a pandemic.

“I’ll be honest, it’s just been really, really hard,” says Cooley, who like Hood, has been performing virtual solo gigs. “I can’t say that I particularly enjoy playing a show in front of a computer screen with an image of me on it.”

Hood, meanwhile, has, unsurprisingly, been more prolific in his writing than Cooley during this time, composing new songs and working on a book project. But being forced to put his band’s touring plans on pause indefinitely has been just as difficult for him. “What I do is so much of my identity, I’m sure to an unhealthy degree,” Hood says. “I don’t want my kids to see me depressed, but I’ve been at times powerless to hide it from them. I just feel like my soul is crushed. It’s been the longest year of my life, that’s for damn sure.”

Out of this climate of existential angst and unrest comes The New OK, which arrives just 10 months after the band’s last effort, The Unraveling. That album was a prophetically dark rock & roll state-of-the-union culled from a marathon week of recording at Memphis’ Sun Studios in the fall of 2018. The bulk of The New OK comes from those same sessions, which yielded a full 18 songs, several of which, Hood says, the band is still sitting on for their next album.

The New OK is anchored by a pair of brand-new dispatches from Hood about the long summer of protests in his adopted hometown of Portland, Oregon. “Watching the Orange Clouds” was written in June, the title track in July, after Hood attended Black Lives Matter protests over the killing of George Floyd.

“Smashing medics and the once-free press,” Hood sings in the title track, out now. “Goons with guns coming out to play / It’s a battle for the very soul of the USA.”

Despite those darkly realist accounts, Hood sees the Truckers’ upcoming record as ever-so-slightly more upbeat than the dystopian-tinged portraits of The Unraveling. The New OK, he says, “is almost more defiant anger than deep-down depressed sadness.”

Shortly after releasing The Unraveling in January, Hood began encountering headlines (like this magazine’s “The Unraveling of America”) that confirmed the band’s dark premonitions about 2020. “When I first started playing ‘Awaiting Resurrection’ from the last record for people, it was like, ‘Man, that’s pretty bleak. It’s not really that bad!’ No one says that anymore,” he says. “After The Unraveling came out, all of a sudden you started seeing headlines about how America is unraveling. Every time that would happen, people would send me notes, like ‘You guys have to make an optimistic record.’ I started saying that the next album is going to be called Free Health Care and Blowjobs.”

The New OK is, decidedly, not that record. It is not even the more personal, upbeat collection the band had been planning to release as the follow-up to The Unraveling. But alongside typically gray tales of Trump-era American demise (see the previously released single “The Perilous Night”), there’s a rowdy Ramones cover, a soul ballad about stubbornness (“Tough to Let Go”), and a pair of road-weary homesick blues (“Sea Island Lonely,” “The Distance”) that, by now, feel comparatively cheery from the group. Bassist Matt Patton even takes the mic for two tracks, the first time someone other than Cooley or Hood has sung lead on a DBT recording since 2011’s Go-Go Boots.

The group’s latest came together quickly, with conversations about rush-releasing a new album not even starting until early August. The band already had seven of the album’s nine tracks in the can, and they recorded the final two new Hood songs remotely. For those tracks, Hood sent his initial demos to drummer Brad Morgan, who added his part. Hood then took Morgan’s drum take, went to a studio in Portland to record his guitar, and then sent the raw tracks to Cooley, Patton, and multi-instrumentalist Jay Gonzalez to flesh out the arrangements. “That was actually kind of fun,” Cooley says of remote recording. “I was able to take my time and put a lot of thought into my part, because I didn’t have anything else to do.”

“The tikis would’ve never hit the streets if it weren’t for Sarah’s flame,” he sings over farcical doo-wop backing vocals and a classic Muscle Shoals electric piano melody.

“Every day I was hearing surprise from talking heads about Trump tapping into this thing that nobody else had tapped into, as if he figured something out with this crowd,” says the songwriter. “And I’m like, ‘Was I asleep eight years ago when I watched Sarah Palin do the same thing, with the same crowd, playing the same hits?’ I had watched her become the toast of crazytown, getting the same applause with the same lines. [For this song], I figured I can insult both of them in the most ironic way possible: I can portray her as a feminist icon, that would piss her off, and then emasculate him a little bit at the same time. That was the gist of it: you guys can’t give a woman credit for anything, can you?”

But Hood quickly realized his bandmate’s point, that, as Hood puts it, “this didn’t just start yesterday.”

Coming just a month before the election, The New OK arrives during a time of unprecedented strife for both Hood and Cooley’s country and their band. “I’m refusing to give into pessimism right now,” Hood says, “but I wish I had an easier time being optimistic.”

Cooley sees the world just a bit differently. “I’m glad we’re putting something out, so the world knows we still exist,” he says. “I’m really running out of optimism, honestly. I never had much to begin with. I’m not a [glass] half-full or half-empty guy, I’m just a half, because it’s a measurable amount. It’s not a matter of fucking opinion.” 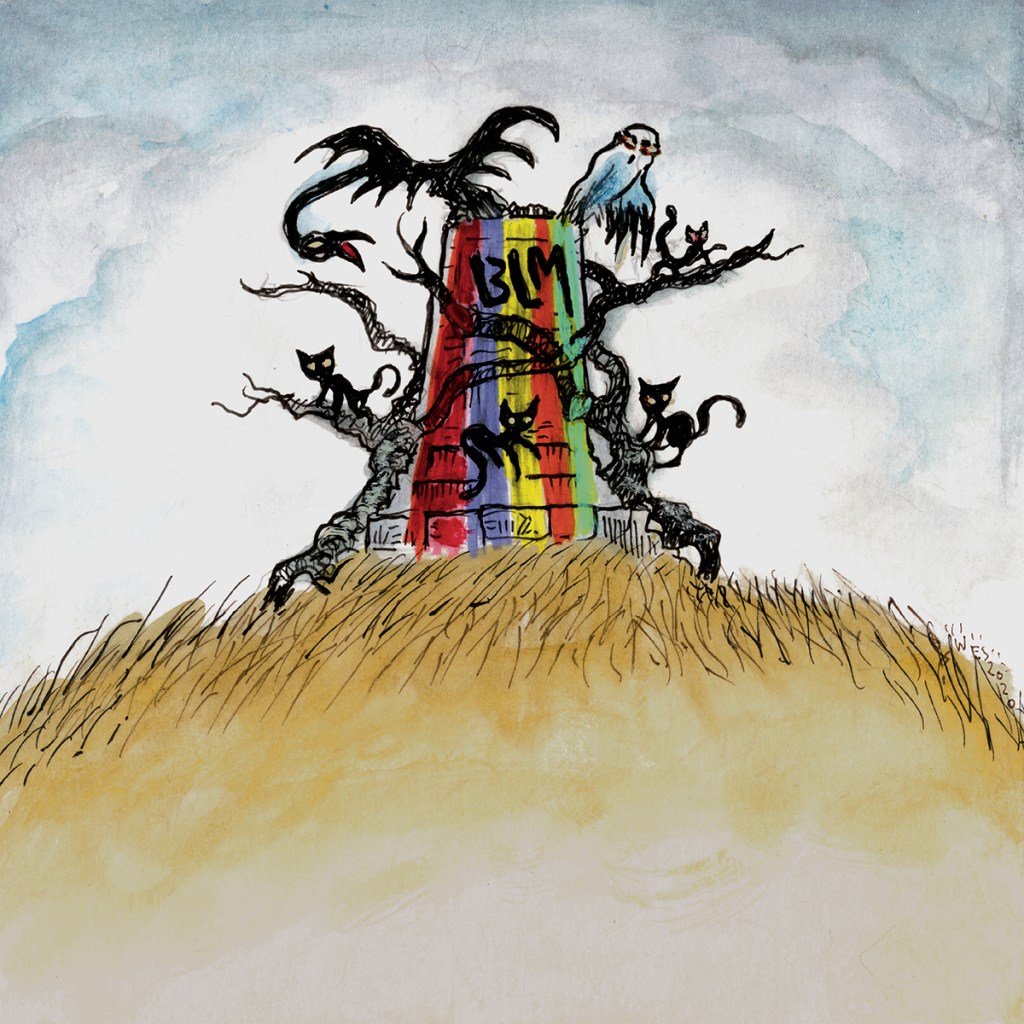