It’s one of those stories that is so improbable it sounds made up. Except Doug Seegers knows it’s true. The 62-year-old singer-songwriter, whose debut album Going Down to the River comes out today, lived every minute of it.

Seventeen years ago Seegers moved to Nashville from New York to pursue his dream of making it as a musician. He also worked as a cabinet maker, drifting in and out of homelessness, dogged by alcohol and drug addictions that always kept him from staying in one job or off the streets for very long.

His most loyal companion was his music. He busked on the sidewalks of downtown Nashville and filled the lined pages in red composition books with new songs to join the older ones he had written over the past 25 years.

Seegers made friends while living on the streets: especially the folks that operate the Nashville Rescue Mission, where he’d crash when he wasn’t sleeping in a tent in the woods or under a bridge, and Stacy Downey, who runs the Little Pantry That Could food bank.

It wasn’t a bad life. “The truth of that whole homeless thing is it’s exciting to me, it’s an adventure,” says Seegers, his lanky build, tousled grey hair and weathered, angular face making him look like a character out of Steinbeck’s The Grapes of Wrath. “In the summertime, you’re outside living in a tent by a stream, maybe you’re fishing. In the wintertime, maybe you’ve got a 55-gallon drum in the woods and you’re throwing big logs into it and everyone’s hanging around by the fire. It wasn’t stressful to me.”

But everything changed this spring. Swedish country singer Jill Johnson came to Nashville and asked Downey to point her toward songwriters who had fallen on hard times. An initially reluctant Seegers played Johnson “Going Down to the River,” a wrenching tune that uses the time-honored metaphor of water as salvation, a place where redemption can be found and sins washed away.

Seegers wrote the song two years ago, while he was still homeless and wrestling with his demons. “It was almost like a prayer I wrote to myself,” he says, sitting in a corner office of his booking agency in Beverly Hills, hours before his first Los Angeles show.

A few months later, he was struck sober. “I prayed for [God’s] help and I feel like he pulled me out of it,” Seegers says, who has remained abstinent. “Also, I had none of the joneses or the cravings or the pain. I had nothing. He removed them all. It was instant.”

Johnson was so moved by the song, Seegers’ performance and his story that she whisked him into a Nashville’s Cash Cabin Studios, traveled back home with the record, and “River” became a surprise hit, reaching No. 1 on iTunes in Sweden in a matter of weeks. 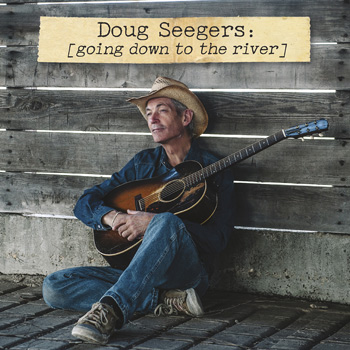 In April, Seegers went into the studio with producer Will Kimbrough to make a full album. Like the title track, Going Down to the River was a major success in Sweden and by July, Seegers found himself on a 60-date tour of the country and the subject of an hour-long Swedish documentary. Now, he’s on tour in the U.S. behind the album’s domestic release via Rounder Records.

Seegers, who recently moved into a Nashville apartment he found on Craigslist after inheriting $5,000 from his stepfather, is still finding his footing as he transitions from cautionary tale to inspiration, from dirty sidewalks to brightly lit stages. At his booking agency, he is tentative and deferential. He is effusive in his appreciation of any kindness: he thanks the assistant profusely, wants to make sure the assistant knows how good the coffee is, asks where to deposit his coffee mug so it’s not in the way when he leaves.

On the album, he is much more confidently in command. Going Down to the River is Seegers’ life laid bare — full of heartache, hope, humor and, above all, truth.

The spare lyrics and melodies, often stripped down to their rawest, most haunting essence, wouldn’t be nearly as poignant if not for Seegers’ voice. His twang has that hollow, lonesome ache that can’t be manufactured. Seegers was born with the pipes made for traditional country, but his hardscrabble existence has given his voice its shape, resonance and undeniable longing.

The album opens with “Angie’s Song,” a bittersweet ode to a lost love. The real Angie “goes in and out of prison. She’s a drug addict and an alcoholic,” says Seegers, adding how he’d rather talk about how Angie’s heart was hurt as a child than her addiction, which he fears dehumanizes her.

He doesn’t know if Angie has heard her namesake song because she left Seegers for another man. Seegers continued to write her letters from time to time until her husband “came up to me one day at the library and said, ‘Don’t ever write to my wife anymore’ and I had to honor that,” Seegers says, sadness seeping through his voice.

The album has its up moments too. The irrepressible “Hard Working Man” celebrates the joys of time off with his “easy-loving woman,” while the bluesy, swinging “Baby Lost Her Way Home Again” jokes that after a fight, the reason his lady has stayed gone for so long is because she has forgotten the route home.

Seegers’ tour, which lasts through October, is his first outing in the States since the 1970s, when he and singer/songwriter Buddy Miller, who went on to work with such artists as Robert Plant, Lucinda Williams, Emmylou Harris and Alison Krauss, met and played across Texas. Miller is on the new album, as is Harris, who, fittingly, sings on a wistful remake of Gram Parsons‘ “She.”

Seegers left that Texas tour with Miller 40 years ago to go back to his native New York and be with his girlfriend. He didn’t like touring then and he doesn’t particularly like it now. “I gotta somehow just adjust and talk myself into not being so annoyed by it,” he says. “Maybe even buy some books.”

Growing up in Queens, New York, Seegers thanks his mom, who loved the Osborne Brothers, for turning him on to country music. His father loved music too. When his dad walked out on the family when Seegers was eight, he left Seegers his collection of 78s and a broken promise to remember him by.

“He made me a deal as a child that if I learned how to play ‘Guitar Boogie,’ he’d buy me a brand new electric guitar. But by the time I learned the darn song, he was long gone. So he still owes me a guitar,” Seegers says, breaking into a rueful laugh. He has no idea if his father, who would be in his 90s, is still alive.

After his time in Texas as a troubadour, he married his girlfriend and had two children. His woodworking kept him busy. “I built the wall unit for the White House when President Reagan was in office,” he says. “I worked for the company in Long Island that had [the] contract. I remember I used Japanese Ash.”

But music kept calling. He left his family and moved to Nashville in the mid-Nineties. He reached out to old pal Miller: “We went out for breakfast one morning. I was trying to get my foot in the door and I thought I might use him to help me out, seeing how we played together years ago. I thought maybe if I was lucky he’d have time for me. It turned out that he didn’t. He was probably too busy doing his own career at the time, so we fell apart.”

Their reunion, orchestrated by Kimbrough, was warm. Miller even wrote an essay for the liner notes for Going Down to the River. Seegers says he’s already talked to Miller about working with him if he gets to make a second album.

For now, however, that’s not on Seegers’ mind. He’s too focused on reaching people through his music. He tears up as he recounts a story of a woman in Sweden who asked him to write a message of hope to her alcoholic husband. “When I looked in her eyes and saw how much [my music] meant to her, it tore me up, you know?” he says.

It is such responses to his music that have made him feel he is on a mission that can’t be measured by airplay or sales. “I don’t really care about the money and the fame,” he says. “I want to be an inspiration; for people to benefit from what I’ve been through. I think that’s what God wants me to be. I think maybe that’s why God put me into this seat.”