There’s a scene in the original 1976 Heartworn Highways that’s become a central heartbeat of the cult film that chronicled Townes Van Zandt, Guy Clark, Steve Young, David Allan Coe and others as they lived, wrote music and filled their lungs with smoke and song in Nashville, Tennessee. Van Zandt is sitting in his wood-paneled kitchen in a denim shirt, plucking “Waiting Around to Die” on a cherry red guitar. His girlfriend sways, but “Uncle” Seymour Washington, a retired blacksmith born to former slaves, just nods as his eyes, circled by tree-rings of wrinkles, turn bloodshot and fill with tears.

“I tried to kill the pain, I bought some booze and hopped a train,” Van Zandt sings. “Seemed easier than just waiting around to die.”

Less than 10 years after the assassination of Martin Luther King Jr., you wouldn’t think a skinny boy from Texas might have much to say to a man whose family twice held onto freedom by a thin, fraying string. But they did. Van Zandt didn’t just speak his language — he sang it. Washington passed away soon after; he sought relief too often in drugs and alcohol. Seemed easier than waiting around to die.

Forty years later, at a theater in Nashville, the cast of Heartworn Highways Revisited has gathered for the premiere. Wayne Price — from Brooklyn, not Tennessee — directed the follow-up to the film, which follows a different crowd — including John McCauley, Jonny Fritz, Langhorne Slim, Andrew Combs, Robert Ellis, Bobby Bare Jr., Shovels & Rope and Nikki Lane —who are creating a new generation of lyrical, narrative-driven songcraft. Like what the 1981 documentary The Decline of Western Civilization meant to fledgling punk bands, the original Heartworn Highways serves as a central roadmap for these artists who worship the words and worlds of Van Zandt and Clark — all the way down to their denim shirts.

But the film doesn’t open up with a country song. Rather, it’s McCauley, most known for his work in the sometimes-raucous Deer Tick. Even in the womb, he says, he would kick to whatever music his mother played. Later, he brings his young daughter, with singer Vanessa Carlton, to the celebratory post-show at Nashville’s City Winery, where he bops her along during fellow co-star Shelly Colvin’s set.

“I guess like Lady Gaga,” he says, laughing, “I was born this way.” Price saw McCauley as the de facto Guy Clark figure — the one who brings everyone together — and Fritz, who shows up next, as the Van Zandt, for his skewed, offbeat sense of humor. “They’re very different,” Price tells Rolling Stone Country. “But they’re two generations that are both very powerful songwriters.”

There’s a recurrent struggle to define in Nashville: what makes country, what makes pop, what makes an “outlaw.” What defines this group, even. But the choice to center around McCauley speaks loudest: this is about writers with a story to tell, who live and die for the sake of the song, not a particular genre.

“Indie rock pulled the songwriting out of music for a minute,” says Ellis after the premiere. “It was kind of depressing.” His central tune in the film is “Tour Song,” about the rude realities of life on the road, juxtaposed with scenes of him making guacamole in his old Nashville home. There’s no traditional chorus, and he picks a mile a minute. Like Van Zandt and Clark, Ellis came to Nashville looking for a community of artists — he found it, but he found other less savory things too. Like Bare Jr. comments in the film, Kris Kristofferson, if he were just coming up today, would be part of this crew — not getting cuts on Music Row. 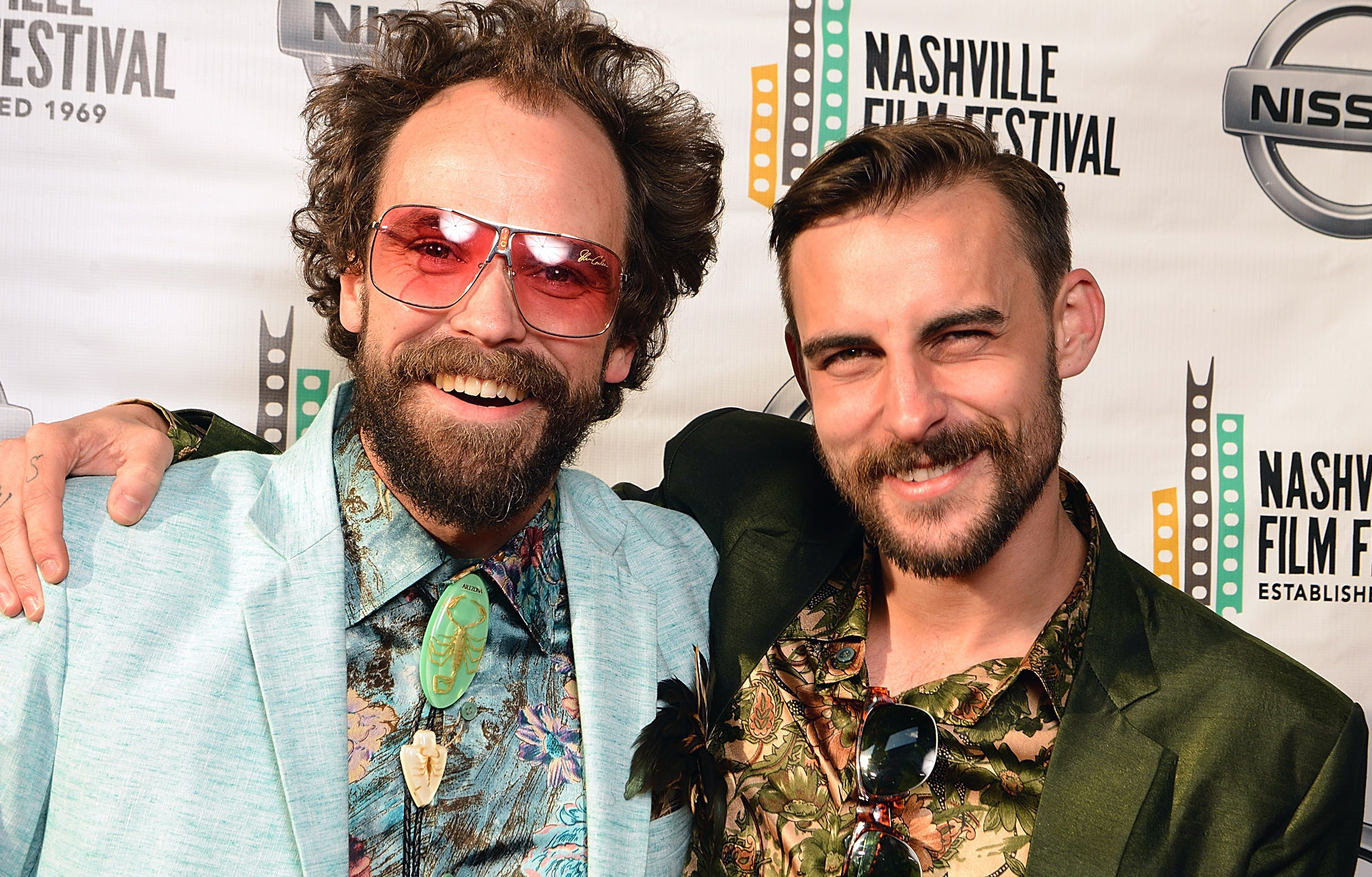 “Nashville is one of the only places I’ve been where people still do give a shit about songs,” says Fritz, seated next to Ellis on a high bar stool. “And where people stay up till five a.m. geeking out about songs. I’ve lived a lot of places, and I’d never lived anywhere like that.”

There’s plenty of geeking out about songs in Heartworn Highways Revisited, but mostly just a lot of songs. It’s also a glimpse into how these artists actually live — a tour of the inside of Fritz’ big red Dad Country van, which he jokes is like CMT Cribs, plenty of time at living room picking sessions, and two very special visits back to the homes of Clark and Coe, which are equally funny and bittersweet. In one scene, Fritz is reminding Coe of a song he’s since forgotten — Coe would rather sing about “itty bitty titties,” anyhow.

And at Clark’s house, McCauley and Fritz are tucked into his subterranean workshop, surrounded by canisters of tobacco and old cassette tapes — three years ago, when filming took place, Clark had just suffered a fall, and his face, black and blue, still shows the wounds. They’re deeper than just the visible scars. He lights a cigarette, after explaining how his beloved wife Susanna “smoked herself to death.” She’s the subject of “My Favorite Picture of You,” which he plays for the duo, then launches into “The High Price of Inspiration.”

“Inspiration with no strings,” he sings, his voice ragged from the years but not a degree less powerful, “I’d like that even more.” Fritz blinks and dips his head just so, as if to think, “How on earth do you write lines like that?” There’s many moments like that across the film as the artists watch each other: as they gaze at Ellis’s fingers rapid fire on his guitar, on McCauley as he records “In Our Time” with Carlton, to another local artist, Josh Hedley, as he sings by the campfire.

“I fell in love with Josh during this process,” says Price, on the songwriter and fiddler who’s played for Justin Townes Earle and Fritz, among many other local friends. He’s hesitant to name who stood out as the next breakout star, but, with Hedley, he comes close. “He was always really funny, and I think that, in time, maybe Josh, if he ends up launching his solo career, might end up it.”

Price wasn’t initially a fan of Van Zandt, Clark or many of the new talents he discovered during filming, but he signed up after falling in love with Heartworn Highways in one viewing. “I had very little trust in Wayne,” says Fritz, “like, ‘You little Brooklyn shithead!’ But it turned out great.”

“Its easy to romanticize the time period and scene captured in Heartworn Highways,” says Colvin. “And as a writer, you hope and dream that you too can find a place to laugh and carouse and write amongst others who want the same thing. Being a part of Heartworn Highways Revisited made me appreciate the fact that I’ve found it.”

It’s one thing everyone agrees on — what makes this particular community so special, and such an echo of the original Heartworn Highways crowd, is just that: community. Everyone is linked somehow: one moment Fritz is filming Combs for his Eighties-riffing VHSessions (“No one knows how to pronounce it,” he laughs), the next, they’re all at local bar Dino’s, where other equally vibrant faces on the scene — including Caitlin Rose and Steelism’s Spencer Cullum Jr. — all join in for some beers and karaoke.

“Whether or not this group fashioned their own existence after the original crew, or it happened super organically, I don’t know,” says Price, who worked with original producers Graham Leader and Brian Devine on the film. “But I felt many times when I was in a gathering of these guys that there really was a camaraderie and genuine mutual affection that I saw in the original film.”

Clark still knows his friend Townes’ tunes too. At the end of the film, Hedley, Fritz, Colvin and Ellis gather around to hear him sing Van Zandt’s classic “To Live Is to Fly,” at local leather-goods shop Peter Nappi. Everyone knows the words, and, in one pan, the camera lands on Hedley. It’s another “how on earth do you write lines like that?” moment, and it’s clear that no one in this group is particularly interested in proving this or that. They just want write and pay tribute to good songs.

Like, perhaps, the ones that McCauley writes. Deer Tick’s not widely recognized as a songwriting band, and is sometimes lampooned for what appears, on the surface, to be “party” songs. Heartworn Highways Revisited cracks this open. McCauley’s not undiscovered — he’s hosted shows at Carnegie Hall — but maybe his words, and his lyrical ability that sounds nothing like Clark or Van Zandt or any of them but builds on the same tradition of musical poetry, is the real diamond in the rough.

“The Americana uprising is supposed to be about songs,” says Ellis at the party. “John McCauley is the best songwriter among us. And if you’re going to honor someone, it should be him. But because what [Deer Tick] do is also inspired by Nirvana, it doesn’t get the same nostalgic thing as if we were inspired by George Jones.”

Over the course of filming, McCauley cleaned up, cut his scraggly hair, gave up binge drinking and met his now wife — in one scene, they’re cooking meatballs in her New York apartment before the couple moved back to Nashville to have their baby. He was sick of being known as the crazy drunk guy — he wanted to have a family, a real life. He was sick, maybe, of waiting around to die.