On Thursday, in the frozen depths of the Blue Ridge Mountains of western North Carolina, Warren Haynes steadily held up a wall of a home as the support beams were nailed down.

Though an exact number couldn’t be found at the moment, the rock guitarist estimated it was somewhere north of 40 homes he’s been responsible for building from funds gathered through his annual Christmas Jam. A fundraiser for the Asheville Area Habitat for Humanity, the bash has raised more than $2.3 million.

“Each year, it seems to get better and more organized, more people are getting involved,” Haynes tells Rolling Stone of the Christmas Jam. “Nobody could ever had predicted it would grow into what it has become. We started out as something fun to do for local musicians, and to see where it is today — well, it’s quite astounding.”

Right around Christmas 1988, Haynes and some buddies took the stage at the now-defunct 45 Cherry, a small rock club in Asheville. At the time, Haynes was a 28-year-old guitar prodigy, still a year away from being asked to join the Allman Brothers Band when they reunited. It was also six years before he formed rock juggernaut Gov’t Mule, which will celebrate 25 years together in 2019.

A native son of Asheville, Haynes gathered the musicians as a way to spend time with folks usually on the road touring or in the studio recording most of the year. They ended up making some decent tip money that night and decided to give it to a local charity — a gesture that stills holds true today.

“The first one we did for a hurricane relief fund. I remember we made $1,700 dollars. We thought we won the damn lottery,” says guitarist Jeff Anders, who played alongside Haynes at the inaugural Christmas Jam.

“There’s something about making music with none of the ordinary pressures of the music business being there. It kind of brings us back to why we all started playing music in the first place,” says Haynes. “Ten or 15 years ago, I was calling as many people as possible trying to get them here. And now? I still do that, but there are so many people calling us to be part of Christmas Jam — and that’s a beautiful thing.”

Here are the 15 best things we saw at this weekend’s Christmas Jam.

Best Ambassador to Bridge the Nashville Gap: Eric Church
Country star (and North Carolina native) Eric Church quickly won over the rock crowd when he strolled onstage with just his acoustic guitar in hand. After a few tunes, including his current single “Desperate Man” and the pot anthem “Smoke a Little Smoke,” which was met with wild cheers, the man in the black leather jacket and aviator sunglasses was joined by Haynes & the Xmas All-Star Band. The group erupted into a glorious cover of the Allmans’ “Ain’t Wastin’ Time No More” before nodding to Bruce Springsteen with “Atlantic City” and the Band, via “The Weight,” both of which prompted an entire arena to join in on the choruses, drinks and spirits raised high and joyously.

Best Song to Crank Up to 11: Mike Gordon’s “Sweet Emotion”
Following a successful summer and fall tour with Phish, bassist Mike Gordon brought out his solo group, who offered a faithful cover of Aerosmith’s “Sweet Emotion.” The classic-rock anthem crept up with Gordon’s pulsating bass notes, and was soon led by searing guitar riffs from Scott Murawski of jam-rock patriarchs Max Creek.

Best Drum Solo: Dave Grohl & Friends
The most anticipated set of the entire weekend, Dave Grohl brought together a handful of talented folks from the alternative and hard rock circles, including guitarist Alain Johannes (who played with Queens of the Stone Age and collaborated with Grohl in Them Crooked Vultures) and bassist Chris Chaney of Jane’s Addiction. The ensemble rolled through Grohl’s 23-minute opus “Play,” stretching the percussive heaviness and sonic improvisation into the better part of an hour. 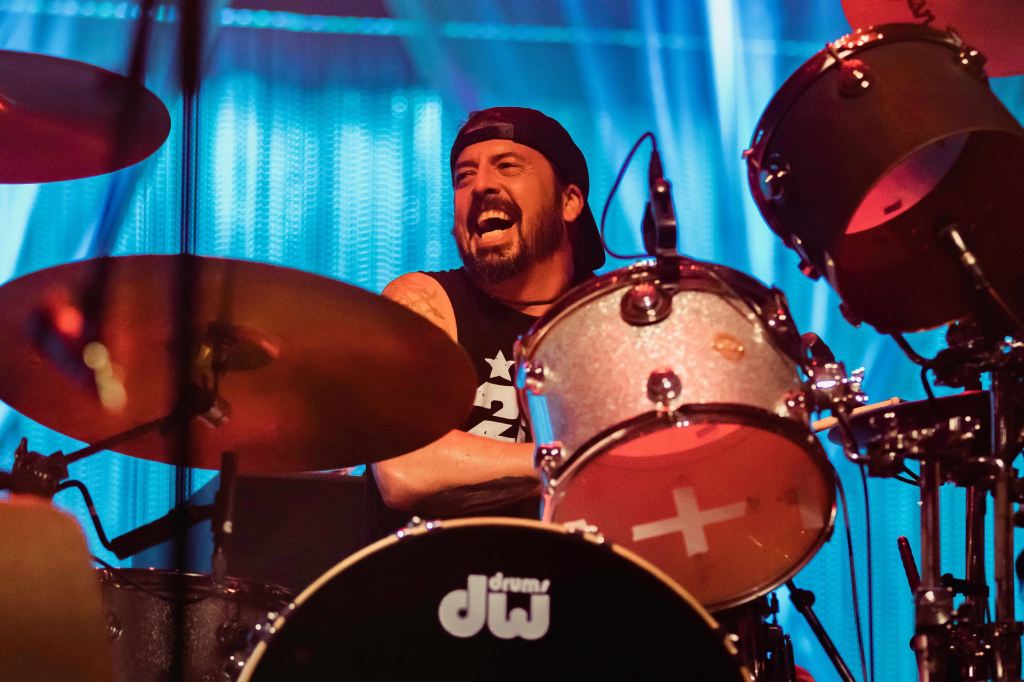 Best Welcome Back: Grace Potter
Though a fixture on the live music scene for the better part of the last two decades, Grace Potter has seemingly flown under the radar in recent years, becoming a first-time mother and refocusing her band after multiple lineup changes. Right before her set, Potter teamed up with Haynes and My Morning Jacket’s Jim James on the Jam’s side stage for an acoustic powerhouse three-part harmony version of Fleetwood Mac’s “Gold Dust Woman.” Potter then roared onto the main stage with her band — and the crowd clearly missed her. “Paris (Ooh La La)” exploded into a spectacle of light and sound, with saxophonist Ron Holloway pushing the melody into completely new territory, reminding those who missed Potter why she’s a soul-rock heiress. 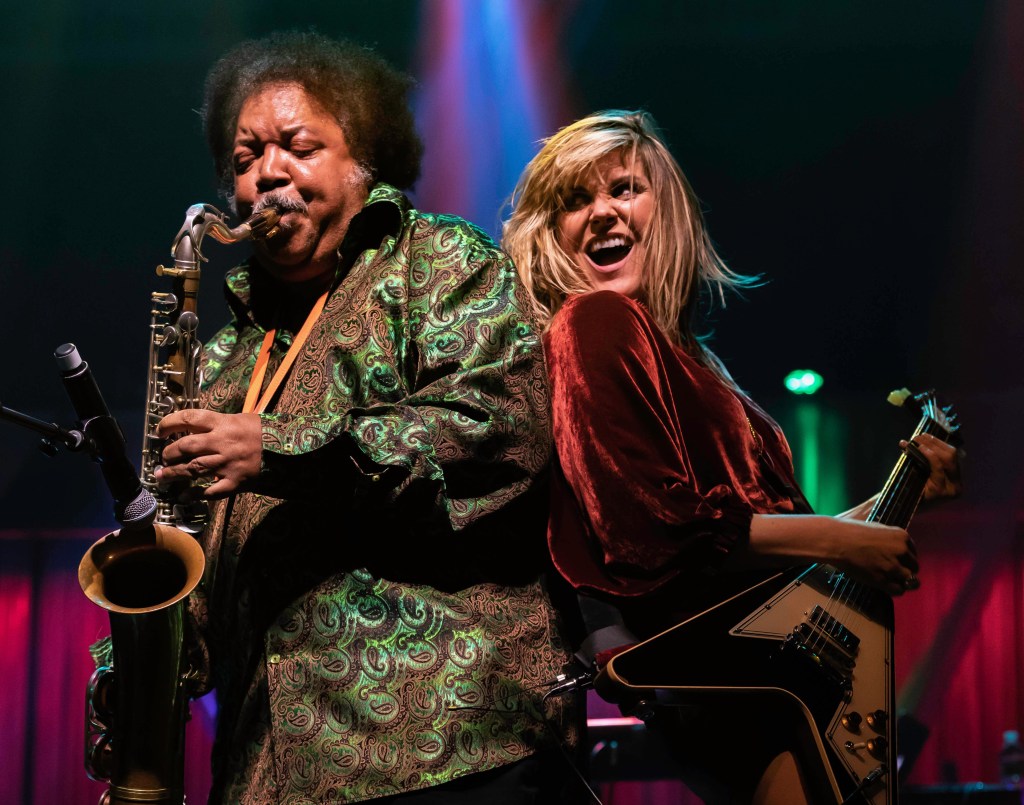 Best Excuse to Light One Up: Dark Side of the Mule
Just after midnight on Friday night, Gov’t Mule rolled into a rendition of Pink Floyd’s Dark Side of the Moon. Featuring an array of backup singers and Ron Holloway on saxophone, the rock act bookended the iconic album with other Floyd classics (“Shine on You Crazy Diamond,” “Have a Cigar” and “Wish You Were Here,” among them). The beauty of the tribute resided in Haynes & Co. allowing the entire collaboration to breathe on its own — the band never once seemed rushed as each second ticked away, which was not only in line with the album itself, but with the intent of the night: to remind the crowd of what a live show can be.

Best Encore: Dave Grohl
Following Eric Church’s set, Grohl jumped onto the side stage with Haynes. The duo (Grohl on acoustic guitar, Haynes on electric) performed an especially poignant take on Foo Fighters’ “Times Like These.” Originally tapped for just a single song, Grohl stuck around to play “Everlong” by himself, silencing the crowd of thousands with a message of peace and solidarity — and one indisputably great song.

Best Rock & Roll Swagger: Jim James
The My Morning Jacket frontman tore through a blitzkrieg of a set with his solo band, juxtaposing his soft, freewheelin’ vocal textures with sharp, urgent guitar notes. The highlights were many, including an ethereal “Here in Spirit” and a swirling “Just a Fool.” When one thinks of those who will become torchbearers of Christmas Jam, it’s easy to settle on James, who with his camp of innovative rockers continue to seek truth in trying times.

Best Reason to Not Sleep In: Songwriters Showcase
Led by Kevn Kinney of Drivin’ N Cryin’, the Songwriters Showcase on Saturday afternoon at the Jack of the Wood pub is the ideal segue from the haziness of Friday night into Day Two of the Christmas Jam. With early morning raindrops transitioning into heavy snowflakes that would coat western North Carolina for the rest of the evening, Kinney & Co. weaved through a round robin back-and-forth of uplifting and sorrowful selections. At one point, Kinney got the cozy, raucous pub to quiet down so he could read a recent poem he wrote, titled “Pick a Number Between 1 and 100” — dedicated to the late Col. Bruce Hampton, a longtime fixture of the Christmas Jam. Kinney wrapped up the showcase with a solo rendition of the DNC classic “Straight to Hell,” the entire bar singing along.

Best Proof That Asheville Is a New Music Hub: Local Talent
The true beauty — perhaps essence — of Christmas Jam is much more than what transpires onstage at the U.S. Cellular Center. For a city of just around 90,000 people, Asheville has a pool of musical talent unmatched in proportion to its population. Keep in mind, this is the crossroads of American music for all of Southern Appalachia — bluegrass, blues, country, rock. A lot not only originated here, but also remains and resides, as seen by local acts during the “Jam by Day” performances, each starting to make a name for themselves on the national scene: singer-songwriter Leigh Glass, country singer Joe Lasher, blues-rocker Andrew Scotchie & the River Rats, indie-jam group Sanctum Sully and soul act Aaron “Woody” Wood.

Best Person to Run into Backstage: Edwin McCain
Hailing from just down the road in Greenville, South Carolina, McCain, a beloved songwriter in his own right (“I’ll Be” and “I Could Not Ask for More”), has been involved in Christmas Jam for 29 of its 30 years. Wandering around the backstage area, McCain (who also performed on the side stage Saturday evening) is a pillar of what the gathering represents — camaraderie and compassion through musicianship. “This is a collection of musicians that understand the difference between trying to be the genesis and trying to be the conduit. Most of the musicians here are a conduit for this music and this energy, without a lot of pretense around someone being the genesis of it,” McCain said. “The audience here has been here for 30 years, the same audience that was with the Allman Brothers Band and the Grateful Dead. And every year, there’s a whole new generation of conduits.”

Best Guitar Solo: Alain Johannes
In the midst of Grohl’s “Play” session, Johannes tore into a solo that staggered the senses. The Chilean guitarist wailed on his Fender Jazzmaster to no end, testing the strength of his whammy bar. It was everything a guitar-head could want out of a solo — whirling, screaming and filled with both vibrato and soul.

Best Didn’t See That Coming: Dave Grohl & Gov’t Mule
Leading up to the last performance of the weekend, a collage of audio clips themed around “revolution” echoed throughout the arena, culminating with the sounds of late poet Gil Scott-Heron shouting “The revolution will not be televised.” By the time Haynes strapped on his Gibson, Grohl was right behind him, plugging in and approaching the microphone. The quartet launched into Neil Young’s “Rockin’ in the Free World,” catapulting the audience into euphoric melodic madness, with Haynes and Grohl trading riffs while drummer Matt Abts thundered away.

Best Reason to Skip Work on Friday: Thursday Pre-Jam
As if two straight nights of endless rock & roll wasn’t enough, the Thursday Pre-Jam at Asheville’s legendary venue the Orange Peel kicked off the festivities with an à`la carte lineup of Christmas Jam players. Performers ranged from avant-garde pianist Marco Benevento and indie-rocker Tyler Ramsey (formerly of Band of Horses) to sax player Ron Holloway and singer Maris, whose rendition of Dolly Parton’s “Jolene” with Haynes and guitarist Jimmy Vivino capped off the evening.

Best Scene Stealer: Joanne Shaw Taylor
The British blues-rock guitarist stole the show twice during Christmas Jam. Once during the Thursday Pre-Jam while going head-to-head with Warren Haynes himself, and then again Saturday evening on the side stage inside the arena. With a fluid playing style and charisma to burn, Taylor hosted her own welcoming party, announcing herself as a next generation champion of the blues. Heck, of rock & roll, too.

Best Way to Lend a Hand: Habitat’s Raising of the Walls
Like the saying goes, “Before the Jam, Lend a Hand.” More than two dozen volunteers and music fans gathered on a small hillside outside of Asheville to raise the walls for the Scott family on Thursday, the newest recipients of a home from the Christmas Jam and the Asheville Area Habitat for Humanity. Even Haynes himself helped out, offering a few words of gratitude and encouragement. “[Meeting the families] is something that connects all the dots,” he says. “It makes it a little closer to home and brings the whole concept of why we’re doing this a little more front and center.” 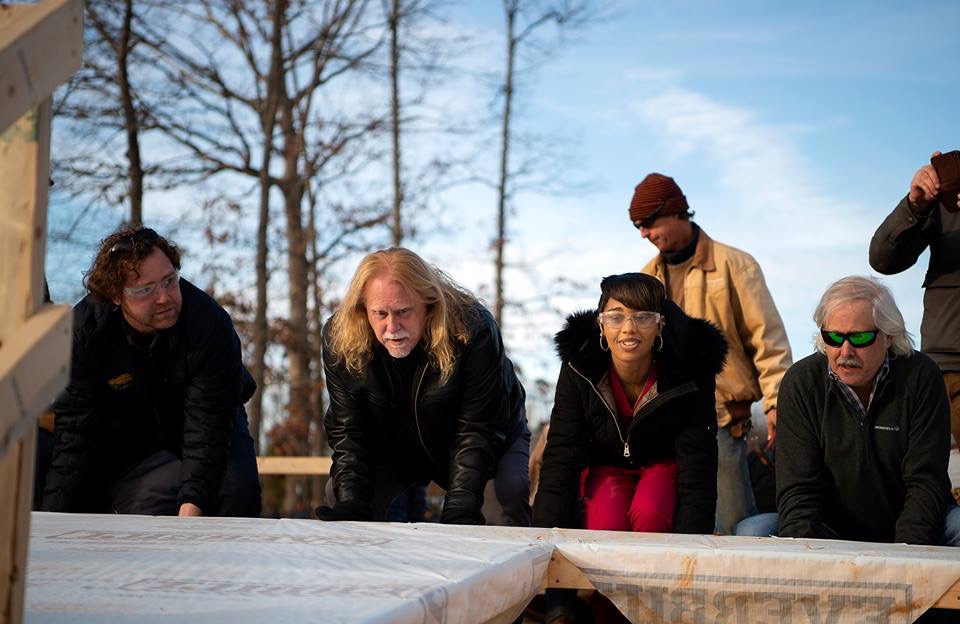