“I’m flabbergasted!” Charlie Daniels tells Rolling Stone Country as he gazes at his exhibit in the Country Music Hall of Fame and Museum. Walking along the memorabilia on display is a trip down memory lane for the 79-year-old icon, who will be inducted into the hallowed Hall on October 16th.

“One thing I was looking forward to was seeing how somebody else would take the elements of my life, stuff that hangs on my wall and sits in my house, and seeing how they would arrange them,” Daniels says. “There is a chronological element to it, but it’s seeing how somebody else sees your life. The awards are prominently displayed and some of the clothes I wore. . .The instruments are prominently displayed, but also personal touches [that represent] my Christianity — I think they did an excellent job.”

Charlie Daniels: Million Mile Reflections shares family photos, a letter from President Jimmy Carter, stage clothes, his Grammy, CMA, ACM and Dove Awards and personal mementos from the North Carolina native’s long and storied career. He points out an old Stella guitar and laughs that it’s in much better shape than what he learned to play on, around age 14. His smile then widens as he points to a photo taken in 1976. “This is a picture of my grandmother on a night that I took her to the Grand Ole Opry and took her backstage and introduced her to Roy Acuff,” he says proudly. “She was a huge Roy Acuff fan! She had listened to him ever since he came on the Grand Ole Opry, and it was one of the biggest nights of my lift getting to introduce her to Roy Acuff.” 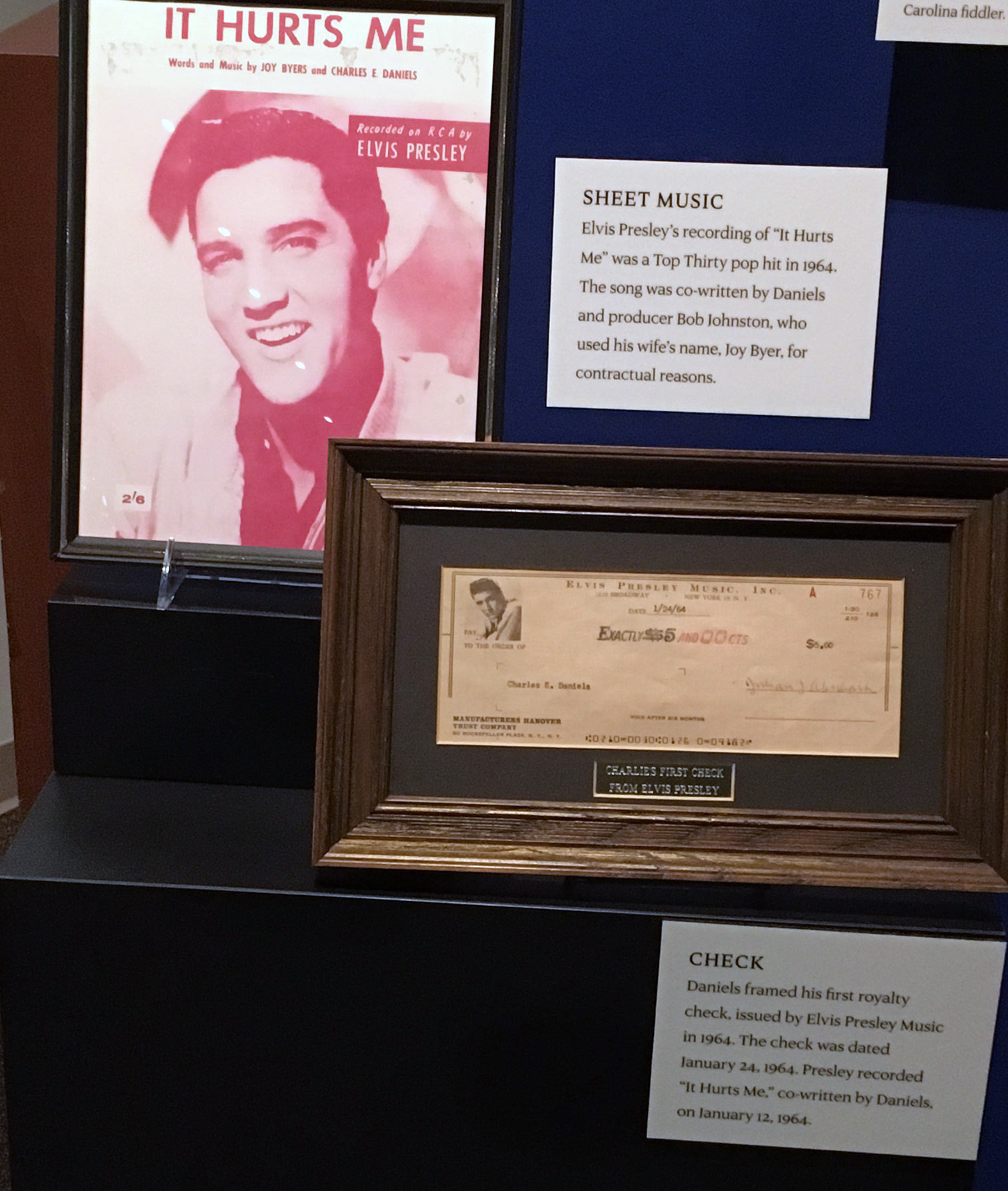 Among other notable artifacts is a check from Elvis Presley Music Inc. for five dollars. Presley recorded “It Hurts Me,” a song Daniels co-wrote, which went to Number 29 back in 1964. “They would send you that check and once you signed it and sent it back, that meant that that song was bound to their publishing company. But I never signed it and sent it back,” explains the singer. “It has Elvis’s picture on it. He was the biggest thing on the planet at that time, so I just kept it for a souvenir.”

Another late legend featured in Daniels’ exhibit is Lynyrd Skynyrd’s Ronnie Van Zandt, with whom the country singer once toured. Van Zandt, who was killed in a 1977 plane crash, gave Daniels a guitar just before he took the stage one night. That guitar, along with a T-shirt worn by Van Zandt during their tour, is on display.

Daniels also did a little spring cleaning at home for the exhibit. He plucked an “old road guitar,” as he describes it, from just next to the easy chair in his den. And he lent his set of walking canes to the museum, complete with their own display case purchased at an Arkansas specialty store as it was going out of business. “I’ve been collecting canes a long time,” he says. “The one with the dragon head, some friends of mine gave me and it came from Korea. The cloisonné cane I bought in China, and it’s all handmade. There’s some ivory pieces, there’s one I bought in Ireland. Some are antiques.”

The exhibit features such clothing as a cowhide vest, a long black leather coat and a serape fashioned by the singer’s wife, Hazel. “This is a serape I wore on the Homesick Heroes album cover and Hazel actually made that,” says Daniels, who recently released a new album of cowboy songs titled Night Hawk. “We got a blanket out of San Antonio market, and she cut it and fixed it to where I could slip it over my head.” 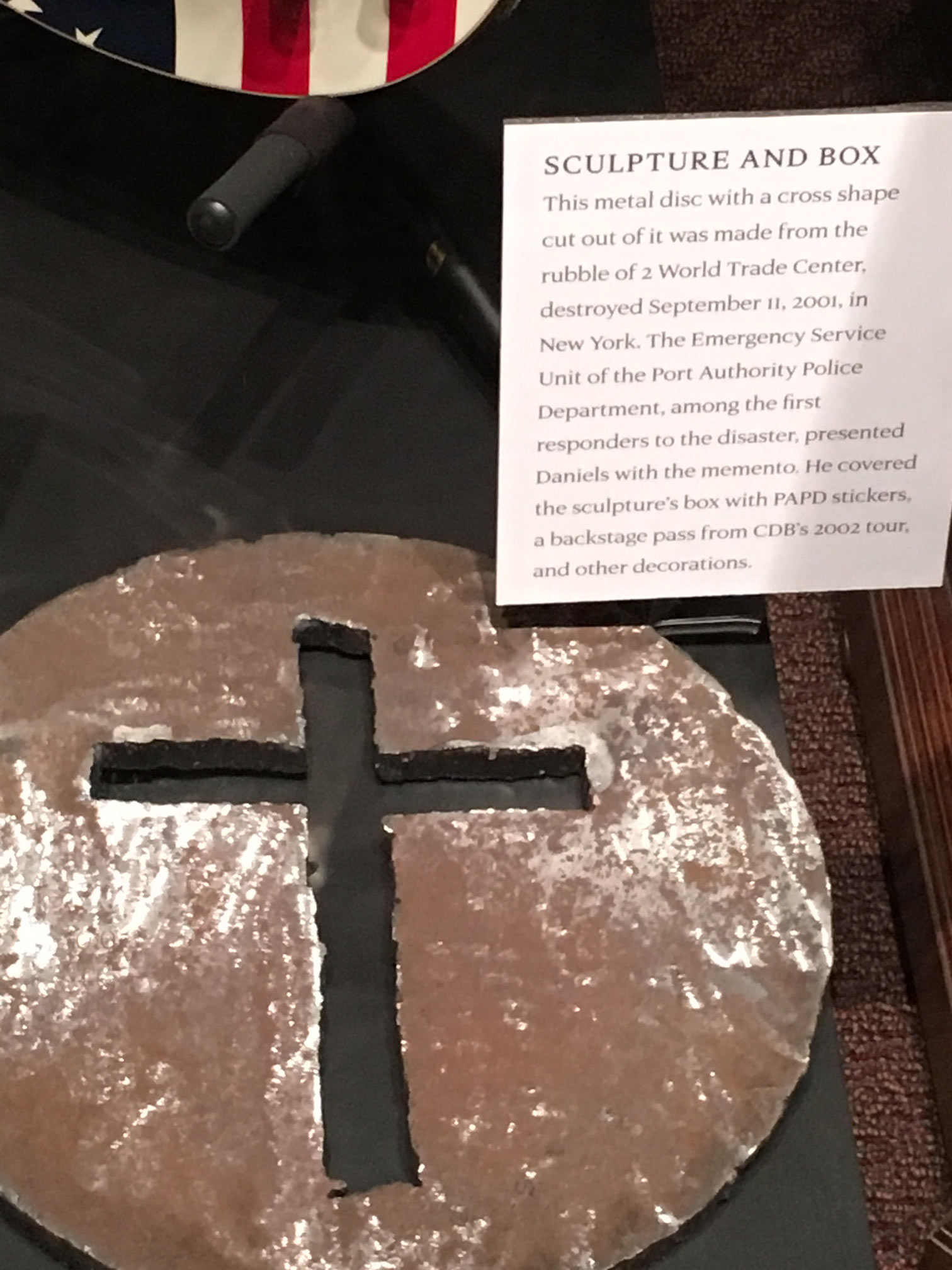 One of the most sentimental items to the legend is a piece of steel with a cross in the center, given to him by New York Port Authority police officers. “It’s a piece of steel from the Twin Towers,” Daniels says of the steel, which came from the rubble of the 9/11 terrorist attacks. “It is something that’s very special to me. I played at the top of the Towers one time when they were still there, and then after it was destroyed I went down into the hole in the ground and toured. To think about the magnificence of what those buildings were and to see what was done to them for no other reason but pure hate, it just symbolizes what a mess this world is in. And this piece of metal would say, ‘Hey, there’s hope everywhere.’ This piece of metal has been twisted and turned and then been carved into a cross.”

As Daniels points to the last of the items in the display and speaks of their significance, his eye catches his lovely wife Hazel standing a few feet away. The day of our walk-and-talk interview is their 52nd wedding anniversary. When asked what they have planned after the Hall of Fame soiree, Daniels laughs and says, “Go home and go to bed. We’re so used to celebrating things not on the day of, just whatever day we find. We’ll celebrate at another time. I’ve got to go back on the road tomorrow.”

Daniels will turn 80 on October 28th, and few artists half his age have his energy and passion. “Blessings from God” is how he attributes his good health and vibrant approach to life. “I get tired and I have to rest more than I used to, but I try to reserve the best part of myself for that time when I go to work at night.”

But Daniels is certainly on his game in the light of day, too, as he takes us on this Hall of Fame tour, counting more blessings along the way. “This [exhibit] alone — without even what’s going to happen next month — is enough to blow my mind,” he says of being inducted into the Hall of Fame next month. “But with the two things combined together it’s just almost indescribable!”

Daniels’ exhibit had its grand opening today (September 23rd). It runs through March.