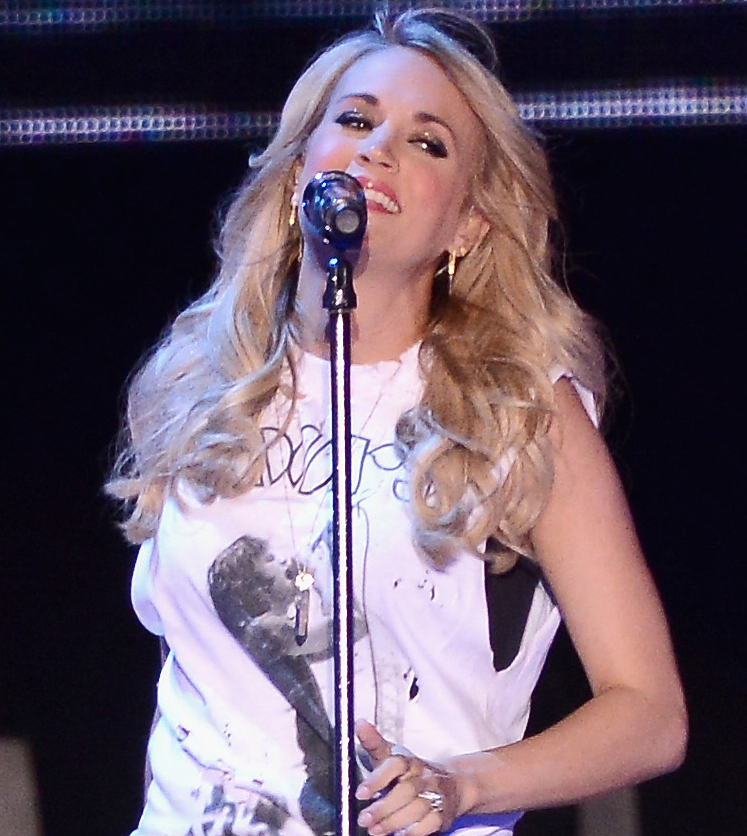 Carrie Underwood capped a big week with a “Little Toy Guns” Number One party in Nashville Friday. Prior to addressing the audience herself, she was effusively praised by song publishers, co-writers and industry executives for taking the compelling single all the way to the top.

Of course, there was a lot for her colleagues to discuss. Just this week, Underwood was recognized as the top country artist on the RIAA digital singles tally, with certifications of 28 million in sales across 20 songs. Not only that, a behind-the-scenes video for her Sunday Night Football opener dropped into 19,000 movie theaters that same day.

Although a new ad campaign featuring her own line of workout wear appeared this week too, Underwood was decked out in a white blouse, stylish black miniskirt and high heels. A newly-presented medallion from the Country Music Association hung from her shoulders. (It was duly noted that she’ll co-host the CMA Awards with Brad Paisley for the eighth time in November.)

“I must be the luckiest girl in the world,” she said, after the sales figures and chart positions from her impressive career were recounted. “It’s always so amazing to come to these things, stand up on the stage and hear statistics and things like that. It just blows my mind.”

Turning to co-writers Hillary Lindsey and Chris DeStefano, she continued, “Thank you guys so much for always writing with me and being willing to come out. No matter what, when we write together, I know that we’ve had a good day. Even if we write a Number One, or we just write something like, ‘Oh, that was good, you know. . . ‘ it’s always such a fun day. I’m honored to be able to stand next to you and to be able to have written with both of you guys. You’re just the best of the best.”

To date, Underwood has recorded 22 songs from Lindsey’s catalog, including “Jesus, Take the Wheel,” “Wasted,” “Last Name,” “See You Again,” “So Small” and “Two Black Cadillacs.” DeStefano is a relative newcomer with cuts like “Good Girl,” “Something Bad” and “Something in the Water.”

After Underwood’s cheerful shout-outs to her manager, BMI, radio promotional staff and producer Mark Bright, she acknowledged the supporters who aren’t in the music business.

“I personally would like to thank the families of anybody who’s on this stage, or anybody that works with us. Your support means so much for writers,” she said.

“And yeah, my husband who’s not here, and my baby,” she added with a laugh. “He had nothing to do with this but I’m going to thank him anyway. I’m sure I’ve forgotten people but it takes a team to make all of this happen and I appreciate all of you so much.”