When the ACM Awards announced its nominees for Group of the Year in February, the Cadillac Three found themselves squarely in the hunt. Ten years into their career, the Nashville born-and-raised trio broke new ground in what, for many other artists, has been the most stultifying of years. In 2020, they released two vastly different albums — the scuzzy Southern rock of Country Fuzz and the greasy funk of Tabasco & Sweet Tea; created and produced the livestream series Country Fuzz Presents as an outlet for themselves and their peers, raising money for a Nashville food bank in the process; and sounded the alarm for music clubs in crisis.

The Cadillac Three’s new video is their latest show of support for venues crippled by the pandemic. “Long After Last Call” was filmed in September 2019 in the Iron Horse Saloon in Sturgis, South Dakota, and if the clip looks half-finished, that’s because it is. Originally the treatment called for the entire band — singer-guitarist Jaren Johnston, lap-steel player Kelby Ray, and drummer Neil Mason — to appear in the video, but the global health crisis derailed those plans.

The final product captures Johnston on a stool in the desolate Iron Horse, strumming a guitar and singing along to “Long After Last Call,” a track off the band’s Country Fuzz LP. Johnston’s delivery is as unconventional for modern-day country music as the black-and-white, bare-bones video: “I been picking up what you been putting down/I’m feeling a little crazy and it ain’t just the crown,” he rap-sings, rushing to catch up to the beat and complete the phrase. “…And coke/I’m going for broke.”

The band premiered the video on Tuesday in conjunction with the National Independent Venue Association (NIVA) and its Save Our Stages campaign. “Until these venues are full once again, donate at www.saveourstages.com,” a title card reads at the video’s conclusion. The Cadillac Three also teamed with Nashville’s historic Exit/In to promote the video locally: the venue’s marquee advertises the band, the video, and #SaveOurStages. 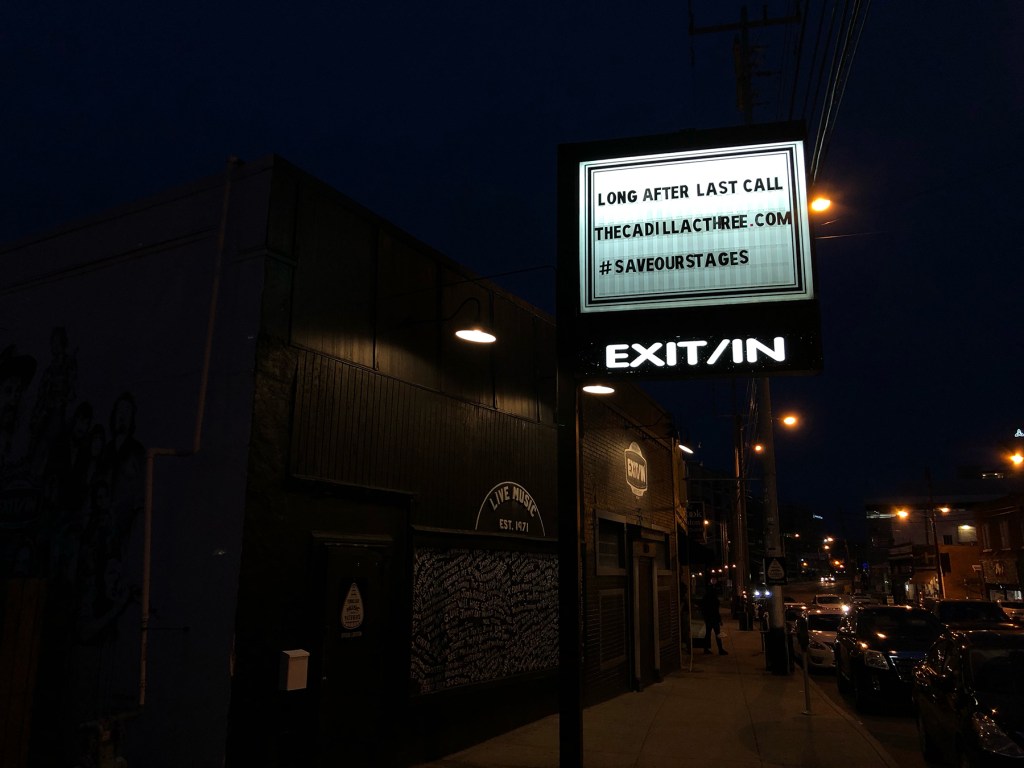 Exit/In, the centerpiece of Robert Altman’s 1975 film Nashville and a proving ground for artists from Waylon Jennings to Talking Heads, is celebrating its 50th anniversary this year in the shadow of a possible sale of the building.

“Our club-owner friends are struggling right now,” Mason told Rolling Stone last year during an interview about the Cadillac Three’s Country Fuzz livestream franchise, broadcast from Nashville club the Basement. “There’s an opportunity to partner up with a venue, and not only provide a service we’re looking for — a place to rehearse where we feel safe and do the livestreams — but also give a venue some revenue they’re otherwise just not getting.”

The group also put a human face to the various clubs in need, posting a video on the Cadillac Three’s Instagram of the bartenders, servers, bouncers, and owners who are struggling to make ends meet.

The Cadillac Three will compete against Lady A, Little Big Town, Old Dominion, and the Highwomen in the Group of the Year category when the 2021 ACM Awards are held April 18th in Nashville.