It’s a stormy Good Friday afternoon in Nashville and the members of Blackberry Smoke are soundchecking on the stage of the Ryman Auditorium. A tornado warning siren sounds in the distance, but it doesn’t faze the long-haired players. They are focused squarely on that night’s milestone gig: a sold-out show at the historic venue, the Mother Church of Country Music. The Southern rock band has always had an affinity for country — they recorded “Yesterday’s Wine” with George Jones for their 2009 album, Little Piece of Dixie, and toured with Zac Brown Band — but their new LP, Holding All the Roses, solidified that connection. Upon its release in February, the album debuted at Number One on Billboard‘s Country Albums chart.

50 Rock Albums Every Country Fan Should Own

“I have another one that says ‘Country,'” he quips backstage, where he and Starr are decompressing after soundcheck. “But I don’t know, man. A lot of people have said that rock & roll radio disappeared and became pop and rap, and the only thing similar to it was country music. It was Eighties rock production and it was an easy fit, so that may have had something to do with it.”

Whatever the reason for their country crossover, the Atlanta-based group is grateful for the success. With next to no radio support, Blackberry Smoke have been building a loyal base on the road, so when Holding All the Roses hit stores, fans were ready to snatch it up. It’s a sign that the old-fashioned system of tireless touring behind an honest product still works.

“It’s a good solid climb. We work hard and we see results. I don’t feel like we’re sliding back,” says Turner.

Though the band came dangerously close to doing just that with its last album, 2012’s underrated The Whippoorwill. Released on Zac Brown’s Southern Ground Artists, the album broke the Top 10 on the Country Albums chart but suffered from a label staff stretched too thin.

Now on Rounder Records, Blackberry Smoke is back on solid ground. “It really feels like we earned it, having a Number One album. At Rounder, all cylinders are firing. To come from nothing, we can really look at what we’ve accomplished and say, ‘We did that.'”

It’s that dark horse spirit that permeates Holding All the Roses, produced by Brendan O’Brien (Bruce Springsteen, AC/DC), and especially its title track. While Starr says the song wasn’t written about the band, it has since come to mirror their journey.

“We were walking through Berlin, Germany, to get ice cream — we’re so rock & roll,” says Starr, “and those lyrics started to come out, so I jotted them down on my phone. It’s the idea of the underdog.” 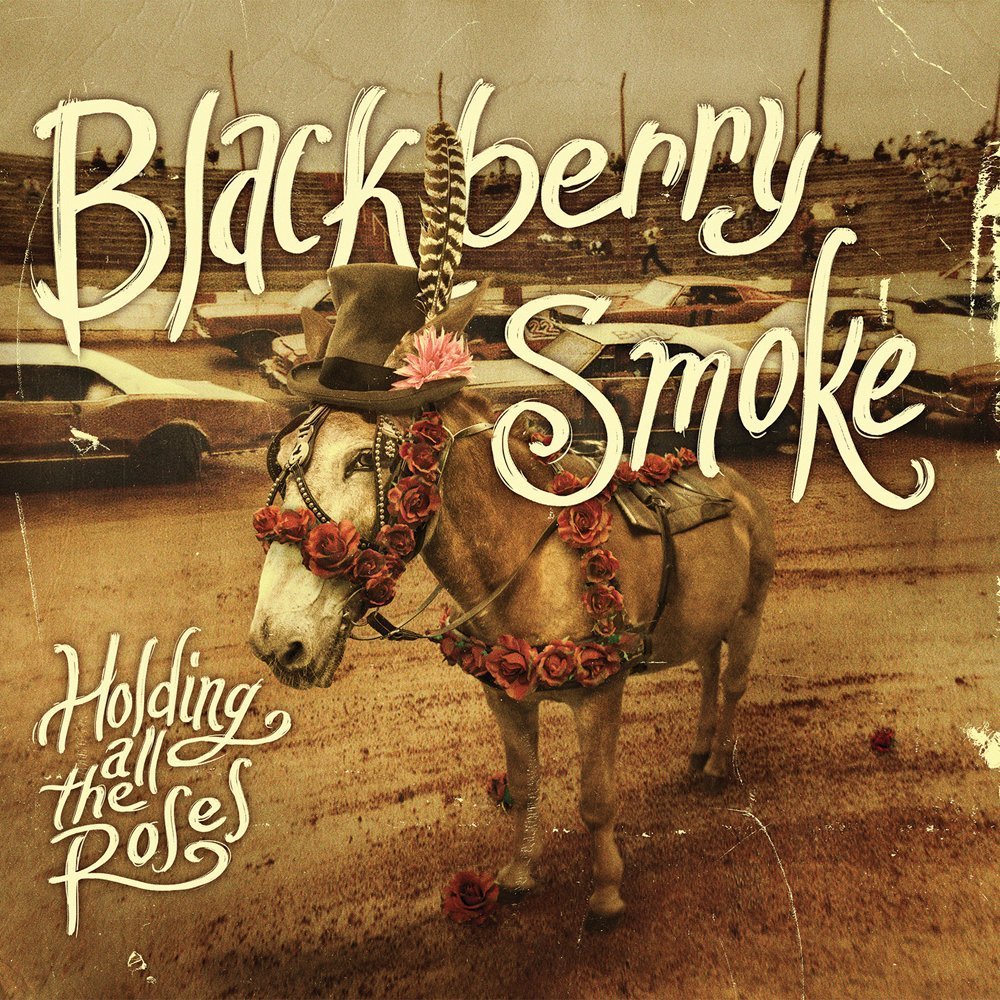 To personify that notion, the band enlisted two local Georgia eccentrics — Digger and Tim — to appear on the album’s back cover art. (The front cover depicts a mule decorated via Photoshop in top hat and roses that Turner photographed in a hotel parking lot in New Orleans.)

“[‘Holding All the Roses’] is about dudes like Digger and Tim. If those dudes were to do something fantastic and win something, it’d be, ‘How the hell did you do that?'” says Starr. “And now the whole thing comes full circle because [the album] then debuts at Number One on the country charts. So it is about us. You can’t make this shit up.”

“It also plays into that theme of when you win, what do you really win?” adds Turner.

Later that evening, Blackberry Smoke certainly look like winners, roaring through a loud and raucous set at the Ryman. The performance is undeniably a Southern rock revival, full of swampy guitar licks and Starr’s yelping vocals. At one point, the group welcomes Cinderella’s Tom Keifer, a longtime Nashville resident, onstage to perform the Eighties hard-rock heavyweights’ “Heartbreak Station” and a cover of the Rolling Stones’ “Brown Sugar.” One of Starr’s earlier concert memories was of attending Cinderella’s Long Cold Winter Tour in Columbus, Georgia, as a teenager. Keifer’s cameo is another nod to Blackberry Smoke’s rock roots.

“A lot of country now is leaning more toward rock and a Southern rock feel. But of every artist I can think of in recent memory that has been called ‘Southern rock,’ the most authentic one I heard is Blackberry Smoke,” Keifer tells Rolling Stone Country. “I remember hearing them the first time and thinking, ‘This is the real deal.’ It felt as real to me as the Allmans or Skynyrd.”

Keifer’s comments are on the money. With Blackberry Smoke leading the charge, country music is in the midst of a Southern rock resurgence, as likeminded groups such as the Cadillac Three and A Thousand Horses ready new albums. Today, the Cadillac Three premiered their new single “White Lightning'” on Sirius/XM, while A Thousand Horses’ “Smoke” enters the Top 10 on Billboard‘s Country Airplay chart.

The Number One debut of Holding All the Roses certainly backs up the idea that country is the new home of Southern rock. And with album cuts like “Too High,” for which the band filmed a spooky meth-lab video, and “Lay It All on Me” (co-written with Nashville songwriter Travis Meadows) incorporating fiddle and pedal steel into the mix, it sounds like a natural union.

Even one of the album’s hardest rockers, “Wish in One Hand” — with its devilish chorus of “wish in one hand and shit in the other” — started out as a country ballad.

“It was like waltz time,” says Starr, “but some songs will just grow a different set of legs.

“It was about a specific person, I won’t say who it is, but they felt so entitled,” he continues. “You meet people like that and you look at them like, ‘What makes you think you can come in here and drink all our beer? Who are you again?’ We don’t give a shit; we don’t like you.”

Starr says he’s heard the off-color phrase countless times from working alongside older Southern men in Georgia. “There was one guy who would say it all the time,” he recalls. “And if you asked him for a cigarette, he’d say, ‘Boy, I don’t give away nothing but hard dicks and black eyes.’ I can’t fit that into a song though.”

Turner laughs loudly. “But it’d be a helluva tour name.”