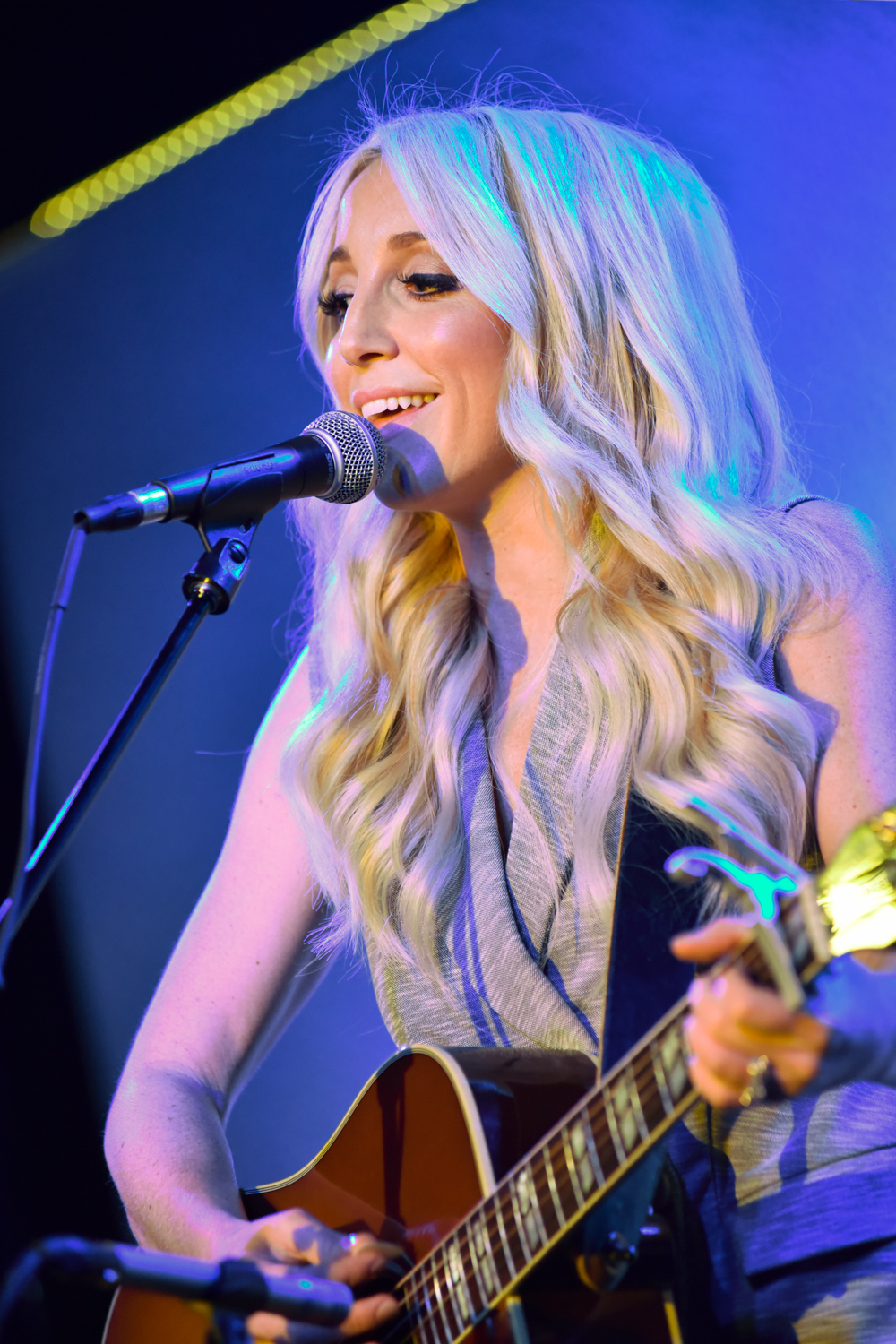 On a surprisingly cool spring night in Music City, Ashley Monroe took the stage of the Blue Room at musician-producer Jack White’s Third Man Records, to treat attendees of the annual Music Biz (Music Business Association) event to a live recording of 10 songs, many of which will included on her upcoming album, The Blade, due July 24th from Warner Music Nashville.

“It’s very crucial we get this right, obviously,” Monroe said after greeting the attendees, which numbered just over 200. The singer and her band rehearsed one song, “Two Weeks Late,” from her 2013 masterpiece, Like a Rose, just to make sure all the recording levels were perfect, and to shake off any last-minute nerves at the prospect of having just one chance to get it right. Monroe’s entire set was then recorded live, mixed in real-time and instantly cut to acetate. It will then be pressed onto a black-and-blue vinyl LP.

And get it right they did. After a faceless voice uttered, “Here we go,” (perhaps that of White, who was spotted in the crowd surveying the scene before the performance began), Monroe quipped, “Oh, my God.” But from the opening number, “Like a Rose,” she was remarkably cool and collected, taking the opportunity to introduce a handful of brand-new tracks, many of which she’d never performed live, including “Dixie,” a moody, contemplative tune about getting out of Tennessee.

Next up was the devastatingly beautiful title track of the upcoming LP, “The Blade.” It’s one of the few songs on the record Monroe didn’t write, but it certainly suits her plaintive singing style. On the studio album, the Tennessee native will share vocals on that track with her longtime friend, Pistol Annies cohort and tour partner, Miranda Lambert. To finish side one of the live LP, Monroe offered the sadder-than-sad “Bombshell.”

After the first five songs were cut, the behind-the-scenes recording technicians replaced the acetate to capture side two of the LP. The affable beauty took the quick opportunity to share one of her favorite blonde jokes: “What do you call a dead blonde in a closet? 1982 hide-and-seek champion.” Keeping things upbeat (if only temporarily), she opened the second half of the 45-minute show with her current single, “On to Something Good.”

“Now, let’s go back to Sad-ville,” she said after the jubilant number. “I’m 28, I’m aging rapidly. I’m kind of looking forward to 30, actually. I wrote this song when I was 19 and it’s still super relevant. It’s called ‘Satisfied.'” The title track of her 2006 debut album, the tune failed to chart when it was released, which is why Monroe added, “It’s kind of obscure. All my songs are obscure.”

The most goosebump-raising moment of the night was reserved for the long-ago recorded, finally available “Has Anybody Ever Told You,” a romantic tune that Monroe admitted she would have a hard time getting through. She did just fine, although the same may not be said about some members of the audience. It’s a stunner.

The show closed with one last new number, the stone-cold country “I’m Good at Leaving,” and after her band left the stage, Monroe delivered a flawless version of the Gram Parsons gem, “Hickory Wind.”

Next up for the singer-songwriter is an opening slot on the Rascal Flatts Riot Tour. Then she’ll join Miranda Lambert’s Roadside Bars and Pink Guitars trek this fall.