When the 50th Annual Academy of Country Music Awards airs Sunday night on CBS from AT&T Stadium in Arlington, Texas, there will be more than 7,000 workers behind the scenes trying to pull off a seamless show. Academy of Country Music CEO Bob Romeo gave Rolling Stone Country a private tour of the venue on Saturday, revealing secrets about the show, which relocated to the Lone Star State this year from its usual Las Vegas home for the golden anniversary.

Romeo’s tips provide a sneak preview of what to expect on the broadcast, while also offering a glimpse into the action off camera and what it takes to put together an awards show at a stadium better known as the home of the Dallas Cowboys.

Face to Face: Instead of sitting in the audience, the artists will be seated in what’s been dubbed “the choir loft,” a section built between the two stages. “We took all the seats out of the stadium and we built this structure with 1,500 seats, which is the same amount of seats that we have on the whole floor of the MGM Grand Garden Arena [In Las Vegas] for the industry and the artists,” Romeo says. “The neat thing is they’ll be facing the fans the whole time.”

ACM Party for a Cause 2015: Our Best Backstage and Onstage Photos

Blake and Luke’s Hideaway: Directly behind the stage is a pipe-and-draped makeshift dressing room for co-hosts Blake Shelton and Luke Bryan. “It’s a quick change room for Luke and Blake, so if we have an emergency or a problem we can pull one of them right onto stage if we have to kill some time,” Romeo says. “There’s no drinking in there, Luke. No drinking, Blake,” he jokes.

The Bat Phone: Also right behind the stage is an area that serves as the show’s nerve center. “If there’s a problem, we have phones back to CBS Control,” Romeo says. If there’s an issue, the viewing audience will likely never know. “A couple of years as we pushed Keith [Urban] on stage, we had no guitar [sound]. We couldn’t find it, couldn’t fix it. Ten seconds to air, [we] pick up the phone: “Roll commercial.” So the network rolled a commercial and [then] another. We realized we didn’t know what was wrong. We roll him off the stage, we roll the next act on the stage. In real time, we change the teleprompter so that at home, fans only saw 8 minutes of commercial and then we’re back to the show.”

Raise ‘Em Up: More than 35,000 audience members will be outfitted with computer-controlled wristbands. “Before a number, we’re going to say, for example, ‘On Alan Jackson, everybody hold your hands in the air’,” Romeo says. “We can then control [the bands] through a computer and spell out things, like ‘Welcome’ or ‘Hi Alan.’ We can change their color, make them blink.” Each wristband contains four Triple-A batteries and is individually addressable.

Me and My Gang: When the show is in Las Vegas, most of the artists stay at the host hotel, the MGM Grand. But instead of having the artists spread throughout the Dallas area, the ACMs created an artists’ bus compound directly behind AT&T Stadium for the acts and their crews. With space for 96 busses representing the 26 acts, the compound is like a summer camp for artists. “We’ve got a bar [dubbed Bluke’s], a basketball court, foosball table, corn hole, a barbecue pit,” Romeo says. “We said, ‘let’s try to create a home’.” Dierks Bentley stayed at the compound on Friday night, but at his wife’s behest, shifted to a five-star hotel the next night. 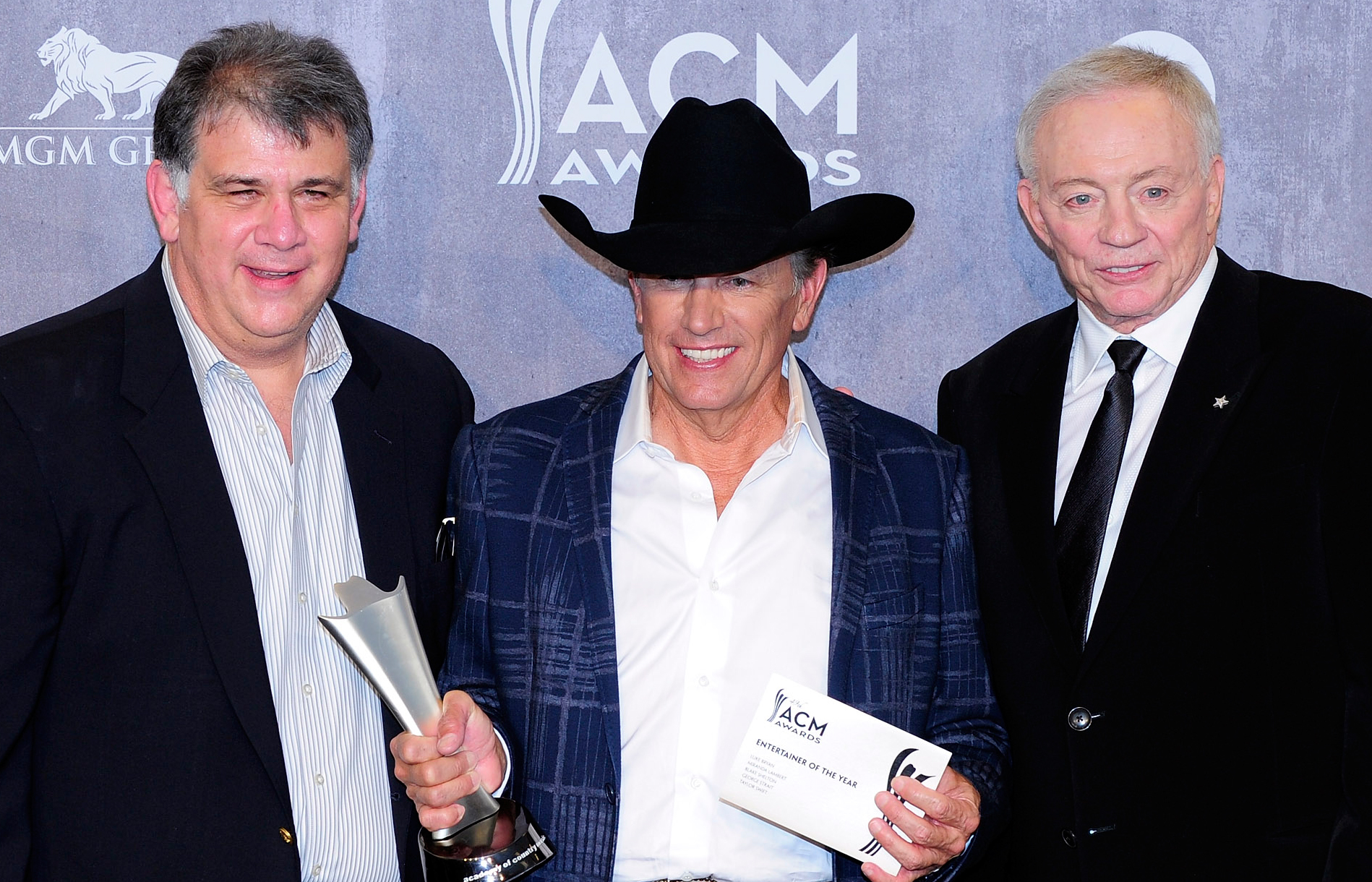 Raise the Roof: AT&T Stadium’s translucent roof created all kinds of lighting issues. The solution? The ACMs covered it with a tarp that costs a cool $1 million. “We actually bought the material and it had to be flown in by helicopter and put on the roof. It took days for them to hook and string the fabric to the roof,” Romeo says. “The Cowboys and the ACM own the covering so we’re hoping we can get our money back as we rent it [out].” Total cost to put on the ACMs in AT&T Stadium? North of $15 million; more than four times what it costs to stage the show in Las Vegas.

U2 Helped the ACMs: After the ACMs decided to hold the 50th anniversary at AT&T Stadium, which opened in 2009, Romeo, the ACM board, and several sound experts flew to Dallas to take in a U2 show at the venue. Following that, a whole sound engineering staff rejiggered the sound system, adding in manifolds and baffles, and making other changes to ensure the sound is as strong as can be. “When you hang speakers, [the sound] comes out and hits the ceiling. It bounces down and it sounds weird,” Romeo says. “We don’t want the sound hitting the roof because when you hit the roof, that’s what causes the problem.”

The Cowboy Way: The evening’s host, Cowboys owner Jerry Jones, has been to rehearsals every day. “There’s a guy who is actively involved,” Romeo says. Jones will watch the show from his private suite on the 50-yard line. Joining him will be Texas Governor Greg Abbott and CBS CEO Les Moonves. Cowboys quarterback Tony Romo and Cowboys legend Troy Aikman will present on the show, but may end up in the suite as well.

Jail Break: Should anyone get too rowdy during the show, they risk getting thrown into the pokey. There are four jail cells in the bowels of AT&T Stadium. “Usually if someone during a football game or event gets out of hand, fights [or] gets overly intoxicated, we have to bring them down here and we’ll [keep] them down here until we can get a unit from City of Arlington police department,” says Brett Arendt, AT&T Stadium security manager.