ACM history and the proud state of Texas were the prevailing themes of Sunday night’s 50th anniversary ACM Awards, with happy-go-lucky Luke Bryan shining as Entertainer of the Year at for the second time in his red-hot career.

“Texas!” he shouted after bounding to the stage and accepting the fan-voted award. “Listen guys, what an amazing night of music. . .with so many heroes who got awarded tonight. Thank you Capitol, UMG, the fans. Thank you to my wife, I love you baby, and my kids at home!”

On top of the night’s biggest award, Bryan also took home a trophy for Vocal Event of the Year with Florida Georgia Line for “This Is How We Roll” and co-hosted the supersized show with good buddy Blake Shelton for the third time.

ACM Party for a Cause 2015: Our Best Backstage and Onstage Photos

But once again it was Miranda Lambert cleaning house, taking home three separate honors including Song of the Year for “Automatic,” Album of the Year for Platinum and her staggering sixth-consecutive Female Vocalist of the Year award.

“I love my job so much, I will never not love this job,” she said following her Female Vocalist win. “Thank you to the fans that make it possible for us to do what we do.”

The feisty Texan had a field-leading eight nominations coming into the evening.

Jason Aldean was crowned Male Vocalist of the Year — his third consecutive — saying, “I’m really stunned, I don’t know what else to say. Three years in a row, thank you, guys, for letting me do this another year.”

Other winners included Florida Georgia Line for Vocal Duo and Musical Event of the Year, and Little Big Town for Vocal Group of the Year, who happily said they “just wanted to bring big hair back to country.”

Dierks Bentley won the award for Video of the Year (“Drunk on a Plane”), Lee Brice collected the Single of the Year trophy for “I Don’t Dance” and a beaming Cole Swindell won New Artist of the Year, which like the Entertainer category is voted on by fans.

“Thank you, fans, for giving this to me,” Swindell said, before adding “and thank you Luke Bryan for being like a big brother to me!”

Before getting his break as an artist Swindell famously sold T-shirts on Bryan’s tours, and the two remain close.

But this year, the brightest spotlight was reserved for the ACM Awards show itself, filled with special collaborative performances and celebrating 50 years of country glitz.

“This is country music’s party of the year!” Shelton began, cueing Eric Church and Keith Urban behind him. “Fifty years ago the ACM’s most promising artist was Merle Haggard, so let’s salute him with a little ‘Pledge Allegiance to the Hag!'” (The song, a deep cut from Church’s 2006 debut album Sinners Like Me, was an interesting choice and set the stage for an evening of looking back.) 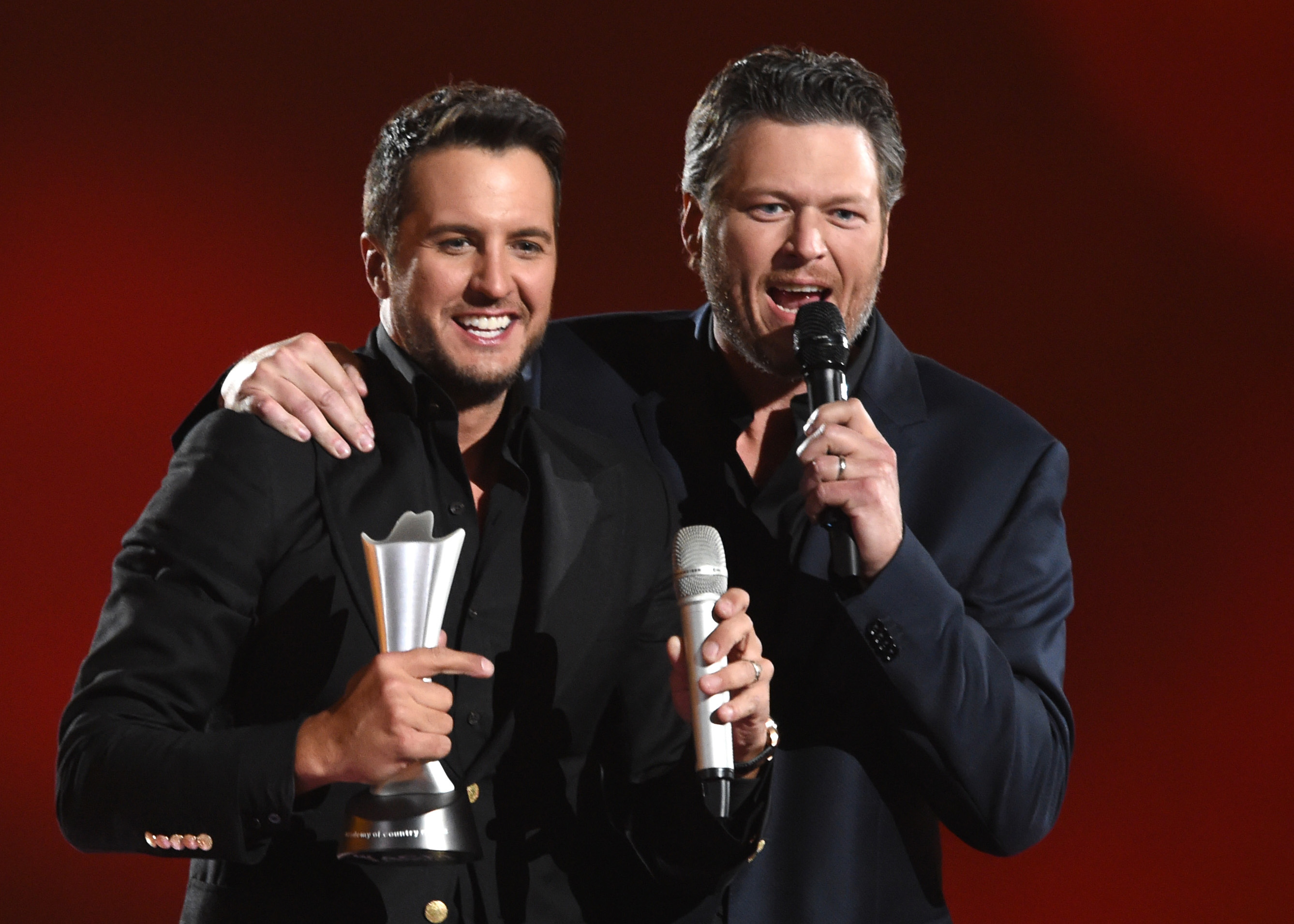 Hosts Shelton and Bryan played it pretty straight all night, content to lob a few football jokes in honor of the Dallas Cowboys and let the music take center stage, but they did have one big announcement.

Stepping onto a huge, twin stage decked out in gleaming black and gold, Shelton and Bryan said the show had set a new Guinness World Record for the most-attended live awards show of all time.

Indeed, moving from its usual digs at the MGM Grand in Las Vegas to the massive AT&T Stadium in Arlington, Texas, the extravaganza drew upwards of 65,000 fans.

“Give yourselves a hand,” said Bryan.

“Screw that, get yourselves a drink!” replied the always-thirsty Shelton.

And in what might end up being the night’s most-tweeted moment, pop crooner Nick Jonas joined the duo Dan + Shay for a grooving, sensual medley of “Jealous,” “Chains” and Dan + Shay’s “Nothin’ Like You.”

Highlights from country’s current superstars included Lambert stalking the stage in a sexy red-and-black corset for “Mama’s Broken Heart” and “Little Red Wagon,” Florida Georgia Line turning in a searing performance of their latest bro-down, “Sippin’ on Fire,” and Aldean stringing three sneering hits together as his mic stand burst into flames.

Bryan connected with “I See You,” Bentley enlisted a string section for “Riser” and Shelton moved effortlessly through his newest single, “Sangria.”

In one much-hyped moment, Brooks made his first awards show performance in what seems like forever — still showing more commitment to his songs than anyone else in the genre — and delivered “All American Kid” before collecting his Milestone Award and thanking the troops.

And while she didn’t perform, Swift being coaxed back to her first country awards show since going full-on pop was like a homecoming.

Enjoying herself like an old friend who’s only in town for the day, she made a few heartfelt remarks to her fans after accepting a Milestone Award from her mother, Andrea, who was recently diagnosed with cancer.

“Someone once told me you truly see who a person is when you tell them something they don’t want to hear,” Swift said. “So to the country music community, when I told you I made a pop album and wanted to explore other genres, you showed me who you are with the grace you accepted that with. I’m so happy I learned to write songs in a town like Nashville, I’m so grateful I learned what hard work is from all my heroes who are sitting here, and I’m unbelievably proud I learned to treat people with kindness and respect from country music.”

But for all the cross-genre outreach and glamour of the golden anniversary, there were still plenty of stone country moments.

Martina McBride belted out her iconic “Independence Day,” Strait showed he’s still the coolest Texan in any room and McEntire reminded us that she’s far from done with her career (performing a medley of hits that culminated with the on-the-nose new single “Ain’t Going Out Like That”).

In the night’s most inclusive moment, the venerable Alan Jackson reprised his gut-wrenching post-9/11 performance of “Where Were You (When the World Stopped Turning),” 20 years to the day after the bombing of the Alfred P. Murrah Federal Building in Oklahoma City.

And finally, Brooks & Dunn — the 27-time ACM winners who recently reunited for a string of Las Vegas shows with McEntire — returned to the stage together for their first televised appearance since 2010.

Both looked happy to be back onstage — like maybe they missed it more than they thought, despite all their rumored personality clashes. Ronnie Dunn’s voice is still in pitch-perfect form, and Kix Brooks hasn’ lost an ounce of crowd-hyping energy.

Say what you want about where country’s headed, but judging by the ACM Awards’ blowout, it knows exactly where it’s been the last 50 years.

Here is the complete list of winners in the evening’s major awards: