ACL Fest: On the Ground at First Festival Since Las Vegas - Rolling Stone
×
×

Valerie June had a lot of time to think on her way to the Austin City Limits Music Festival in Austin, Texas, this weekend. On October 2nd, the Memphis R&B singer was on tour in Australia when she woke up to the news of a mass shooting at the Route 91 Harvest festival in Las Vegas. Just four days later, after a 19-hour flight, she was scheduled to perform on the opening day of the first weekend of ACL, the first major music festival to take place after Route 91.

“As my plane was landing in Los Angeles, it hit me: ‘Wow, I’m going to play a music festival,'” June recalls. “I got a little anxious. I didn’t really know what I was feeling before. I had just been a little bit snappy and sassy and short-tempered.”

June wasn’t the only one on edge in the lead-up to ACL Fest, which was expected to draw as many as 75,000 people per day from Friday to Sunday. “I’ve been a wreck all week,” admitted Gordy Quist, singer and guitarist of Austin’s Band of Heathens, who, like June, performed on Friday at ACL Fest. “This has been a terrible week, thinking about this stuff. Everything that went on was horrific.”

Earlier in the week, festival organizers offered refunds to ticket buyers concerned over safety, while the Austin Police Department announced an increased security presence, including additional help from federal law enforcement and the Texas Department of Public Safety. But for June, her fears were assuaged before she ever set foot on the festival grounds at Zilker Park.

“I said, ‘I’m called. This is what I came here to do,'” June says. “As artists, we’re called in our way to create and share something beautiful in the world. People ask me a lot, ‘Is that enough, or should you be yelling and holding a protest sign?’ And I do really think it’s oftentimes enough to create something beautiful and give people space to come together.”

Quist agreed, describing his band’s appearance at ACL as a “middle finger” to Las Vegas gunman Stephen Paddock, who killed 58 people and injured more than 500 on October 1st while Jason Aldean was headlining the final night of Route 91.

Lukas Nelson, who also performed on Friday at ACL Fest with his band Promise of the Real, was more pointed. “If anything, it made me want to go out and play music more,” he said of the domestic terror attack. “I feel like the media and everybody else wants to make a big deal about it, they want to make people afraid or something. I don’t even like the conversation. Of course I’m going to go out there and do what I do. We don’t let anybody with a gun try to dictate our sense of freedom, our playing music and spreading love and celebrating life.”

From the artists’ perspective onstage, the specter of violence didn’t seem to hurt attendance. “If anything, it was more crowded than it’s ever been. I was shocked by how many people were there,” says Quist, who has played ACL several times before. “My biggest fear would be that nobody comes to the festival because we’re all afraid.”

ACL Fest attendee Logan Cassidy traveled from Ohio to attend the festival, and walked around carrying an American flag and a sign that read, “End mass shootings, we’re not afraid of you.” “The day after [the Las Vegas shooting] happened, my mom texted me and said, ‘Maybe you should reconsider going to this music festival.’ I thought about it a second and felt the complete opposite. I can’t live life in fear, I can’t let these guys win,” says Cassidy, who had originally planned on only attending the second weekend of the festival, set for October 13th through 15th, but purchased a ticket for weekend one in the aftermath of the shooting.

Other fans, like Austin natives Dave and Andrea Pittard, felt comfortable enough to bring along their daughter in a stroller. “I’m not going to let one or two crazies pressure me from going and having a good time with my family,” Dave Pittard says. Increased security measures helped put them at ease, his wife added. “The police department said they’d set up heightened security and increased perimeters. It seemed they were at least being proactive, so we felt comfortable bringing our family,” she says. 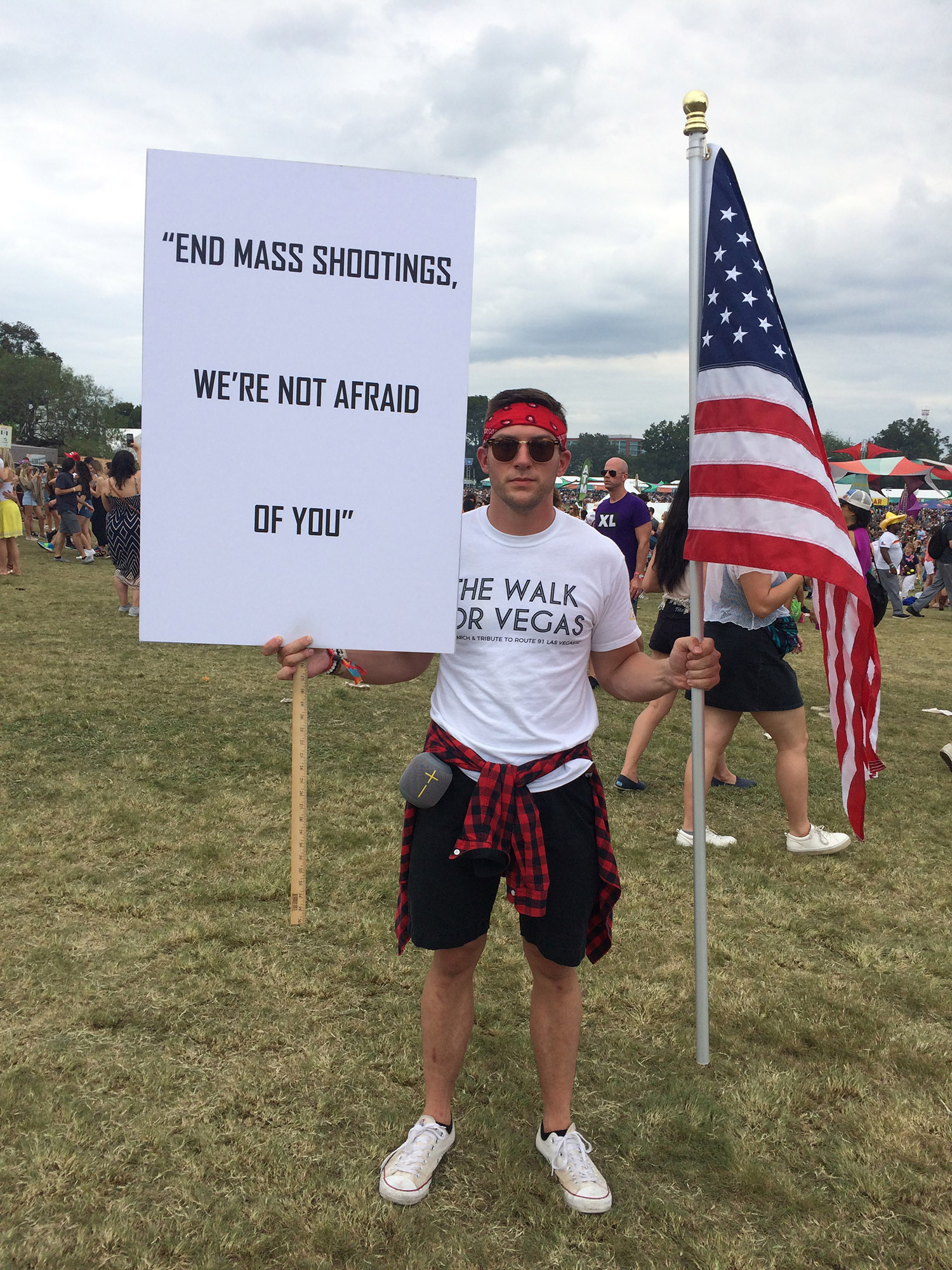 While ACL is an urban festival, there are some key differences between its layout and that of Route 91’s near the Las Vegas Strip. The festival grounds are contained within Zilker Park, a relatively secluded space across the Colorado River from downtown Austin. Vehicle access is tightly restricted and there are none of the high-rise buildings like those from which Paddock conducted his sniper-like attack – a method of assault that was also used in Austin in 1966, when Charles Whitman opened fire from a clock tower perch on the University of Texas campus, killing 16 people and an unborn child.

“Austin was the first city that I’m aware of that ever had a mass casualty event from a shooter atop an elevated position,” says Austin Chief of Police Brian Manley, who is more concerned with large numbers of fans leaving the secure confines of the festival grounds at one time. “We’ve taken care of [safety] when the crowd is inside,” he says. “What’s been alarming over the past couple years is people using vehicles as weapons, simply plowing into crowds.”

The extra vigilance with security made for noticeable backups at entrances, although fans typically reported waits of only a half hour, and barely noticed the security presence once inside. “They’ve done a good job. It’s a terrific balance this year especially. I feel safe and I’m having a great time. It just makes me concerned about where it could eventually go,” says Beau Redfield, who recently moved to Texas from Wisconsin and was joined by several friends for the festival. He’s worried about security becoming too restrictive. “When you ramp up security for a festival like this, it impacts on your ability to feel free. It’s counterproductive.”

Chief Manley doubts that the Las Vegas mass shooting will lead to significant changes in festival security, although he thinks it’s significant that the Texas state troopers reached out to offer their services at ACL Fest this week. “I think you may see more types of law enforcement that didn’t traditionally help at these events recognize that they can help local law enforcement agencies keep everyone safe,” Manley says.

Nelson believes there’s only so much that can be done. “Having good security is important, but honestly I’m inclined more to believe that if somebody really wants to do something, they will,” he says. “How do you stop that from happening? You’d have to create a police state.”

Sergeant Michael Crumrine has worked security at ACL Fest for Austin PD ever since the first festival in 2002, but he doesn’t see recent events a change from the norm that has developed in the past decade and a half. “Every year since 9/11, and since everything that’s happened with domestic and international terrorism, it’s just a part of life now. Is that sad? Yes,” he says. He doesn’t see that affecting fans for the most part. “Some people seem like they’re on edge, but I’ve had more people come up to say, ‘Thank you, you make me feel better more than other years.'”

June says she felt the same sense of appreciation from being onstage and is looking forward to coming back for the second weekend of the festival. “It was good to be around each other in that kind of environment listening to music and trying to share something we can all enjoy, no matter what our belief or race might be,” she says. “I looked out at the crowd and was just super grateful that people’s hearts aren’t closing.”

In fact, the biggest impression made on fans and artists like Quist and Nelson was from the various ACL Fest tributes to Tom Petty, who died on October 2nd. Prior to Spoon’s set on Saturday night, a trio of skydivers parachuted onto the grounds while the jumbo screens all showed footage of Petty and the Heartbreakers’ performing “Free Fallin'” at ACL Fest 2006.

“Everywhere you go, you hear Tom’s music playing. So instead of feeling afraid, you feel uplifted,” says Nelson. “That’s what music’s for, especially Tom’s. You don’t have to live like a refugee. We don’t have to live in fear of these fuckers.”