The 55th CMA Awards tried to restore a sense of normalcy to country music, following another year of the pandemic, a scandal with one of its rising stars, and a genre that is fracturing along political and cultural lines. For the most part, the CMAs succeeded: fans were back inside Nashville’s Bridgestone Arena, artists mingled and danced on the venue floor, and the majority of performances were inspired. Still, there were a handful of missteps, along with a few “Wait, what?” moments. Here’s how we saw it.

Best: Carly Pearce and Ashley McBryde deliver the most country performance of the night.

The show hit its emotional peak right off the bat when Carly Pearce and Ashley McBryde — dueling contenders for Female Vocalist of the Year — raised every damn goosebump in the Bridgestone Arena with their heart-busting duet about finding out the nice guy who changed your tire at the gas station is not so nice after all. “Never Wanted to Be That Girl” is a classic knife-to-the-jugular cheating ballad, like the time-traveling other half to Reba’s 1986 hit “Whoever’s in New England.” Knowing that Pearce’s finest song came at such a considerable cost — the 31-year-old divorced in 2020 after only eight months of marriage — made it all the more shattering to watch Pearce and McBryde enact the two involuntary sides of a love triangle: “I feel stupid/I feel cheap/ I feel used/ I feel weak.” Phew. 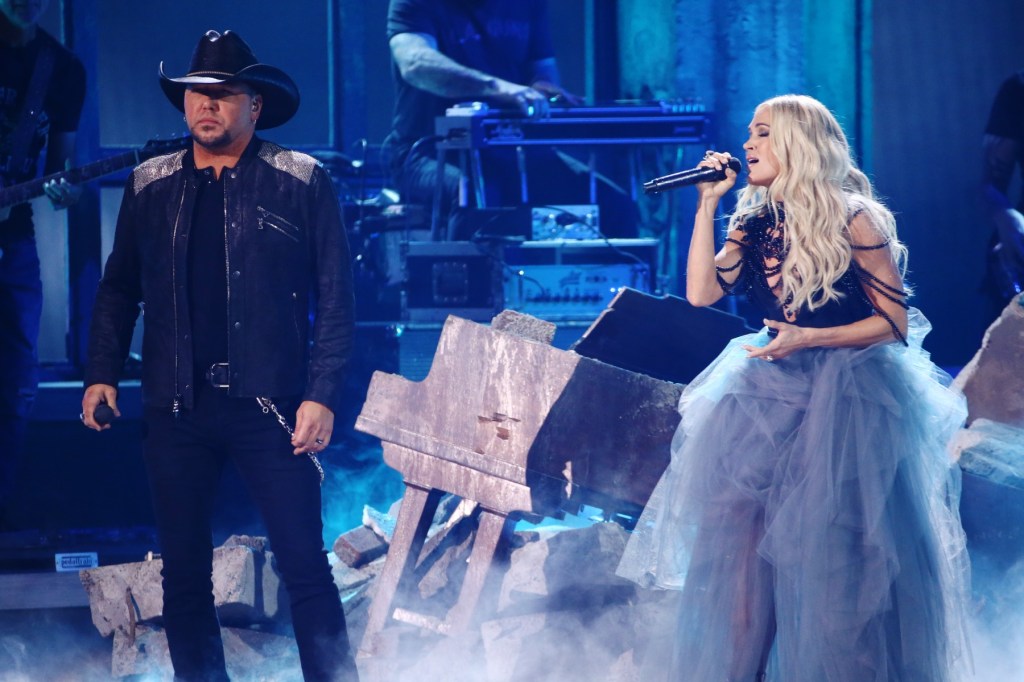 The CMAs caused a stir in 2017 when they tried to restrict journalists from asking questions about politics on the red carpet. This year, they rewarded Jason Aldean, an artist who’s spent the better part of the fall stoking the political fire, with a prime top-of-the-hour performance slot. In October, Aldean ripped California governor Gavin Newsom over his state’s vaccine requirements, promoted a pro-Trump/anti-Biden clothing company in September, and just this week modeled a trolling T-shirt from his wife Brittany’s new conservative apparel line that read “This Is Our F—ing Country” with an image of the U.S. flag standing in for -UCK. For his CMA performance, he teamed up with Carrie Underwood to give the ho-hum live debut of their duet “If I Didn’t Love You.” A little bit of doing your own research will tell you that neither artist cares much for vaccine mandates or masks, which is questionable enough in the ongoing pandemic. But it’s Aldean’s reactionary politics that are clearly at odds with the CMA Awards’ intended message of inclusivity. (Whose fucking country exactly?) The Chicks criticized Dubya in 2003 and weren’t seen at the CMAs until 2016; Aldean’s tacit embrace of anti-Biden sentiment got him this year’s big performance. The double standard is staggering. 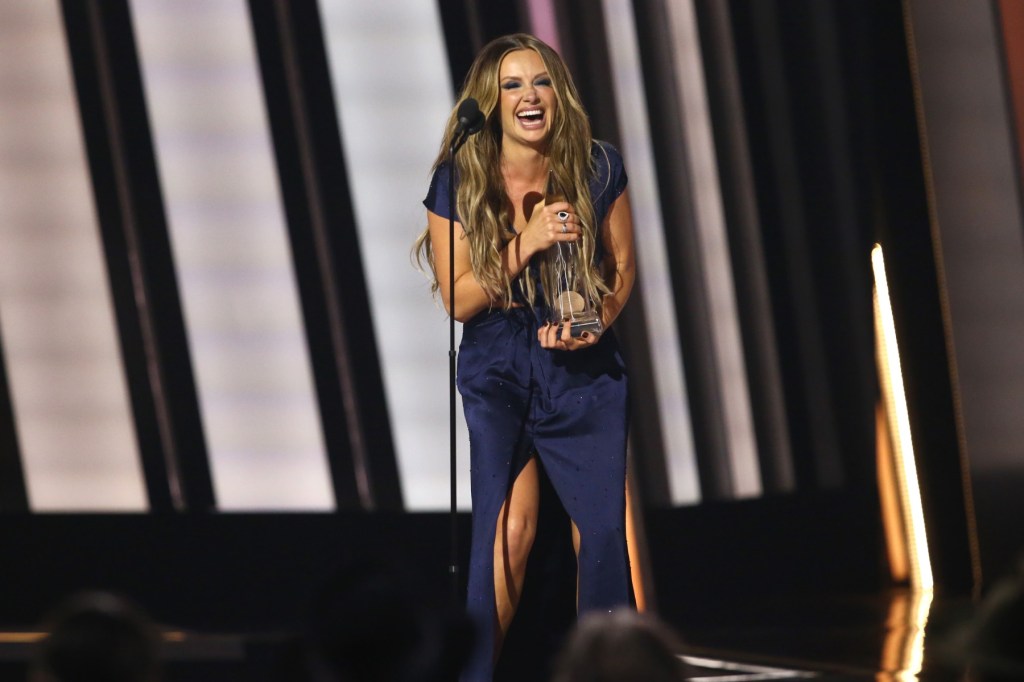 Aside from Chris Stapleton — who easily hit 10,000 steps walking back and forth from his table to the stage (he performed twice and took home six awards) — the best wins of the night were all the underdog upsets. Carly Pearce rightfully beat out champs like Miranda Lambert and Maren Morris for Best Female Vocalist and completely lost it when she got onstage to accept the award (“I’ve had just like, a crazy year, and country music saved me,” she croaked pushing back tears.) Best New Artist winner Jimmie Allen, who gave the night’s only Lil Nas X tribute accepting his award in a Mattel-pink cowboy outfit, spoke with tearful gravitas about what the award meant to him after once living in his car. But the quintessential win was when a dumbfounded Luke Combs took the night’s biggest award, Entertainer of the Year, and approached the ever-regal Alan Jackson at the podium like a confused college student going to the registrar because of a clerical error on a transcript. “I don’t deserve to win it,” Combs said. “But I’m sure as hell glad I did.” 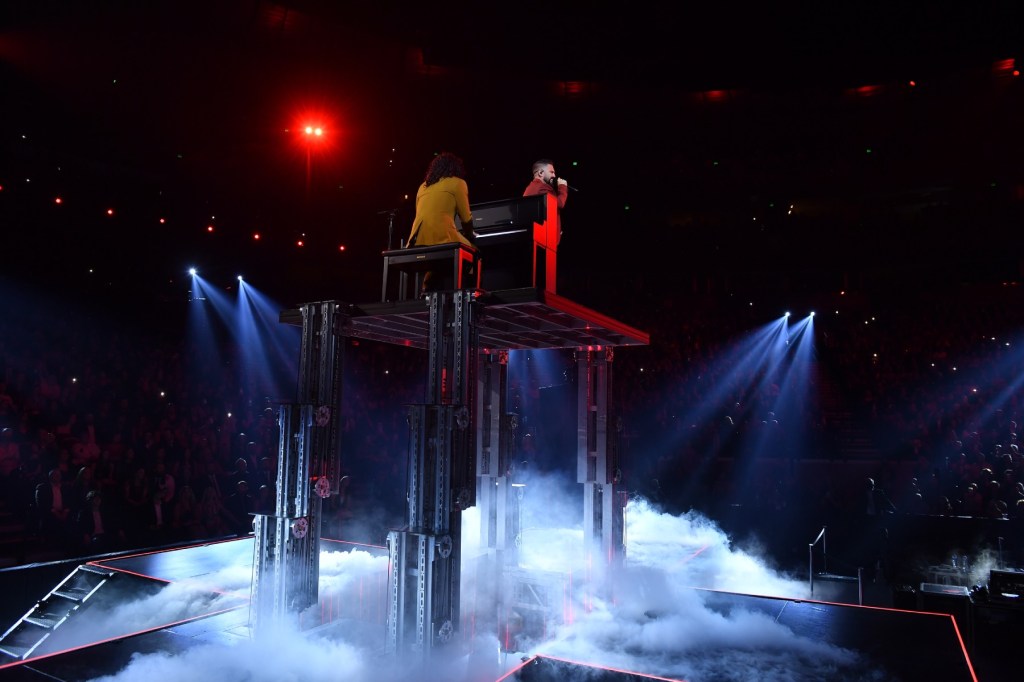 Given our collective warped sense of time, it’s possible to forget that Dan + Shay originally released “I Should Probably Go to Bed” in the early pandemic months of 2020. They’ve since released the Number One “Glad You Exist” and its follow-up, “Steal My Love, from their album Good Things. So, it felt a little like being transported back to the miasma of last year when they dusted off the bombastic “Bed” for their CMA performance. That meant huge vocals from Shay Mooney, of course, but also the single most terrifying stage setup of the entire show. Performing from the Bridgestone Arena floor, Mooney and Dan Smyers handled their parts while a postage-stamp-sized hydraulic platform slowly elevated them to what might have been 25 feet above the floor — not quite to the rafters, but high enough to guarantee at least grievous injury in the event of a fall. An appropriately over-the-top setup for a time when just stepping inside an arena can still feel like a death-defying stunt.

Best: Mickey Guyton and Co. give country a divine intervention.

After Pearce/McBryde set the emotional bar for the night impossibly high, Mickey Guyton said, “Hold my beer.” The 37-year-old singer began her empowering song “Love My Hair” by bringing onstage the young Black girl who inspired it. In 2018, Faith Fennidy, 11, was sent home by her school because the teacher said her braids were “distracting.” With Brittney Spencer and Madeline Edwards, the three singers harmonized in flowing white lace gowns, their abundant hair like glorious halos around their faces. “I found my freedom/ When I learned not to care,” they sang. At the CMAs, where a lot of the same stars show up year after year, it was a welcome change to the lineup, like a chorus of Greek goddesses randomly descended on a Wednesday night at Tootsie’s. 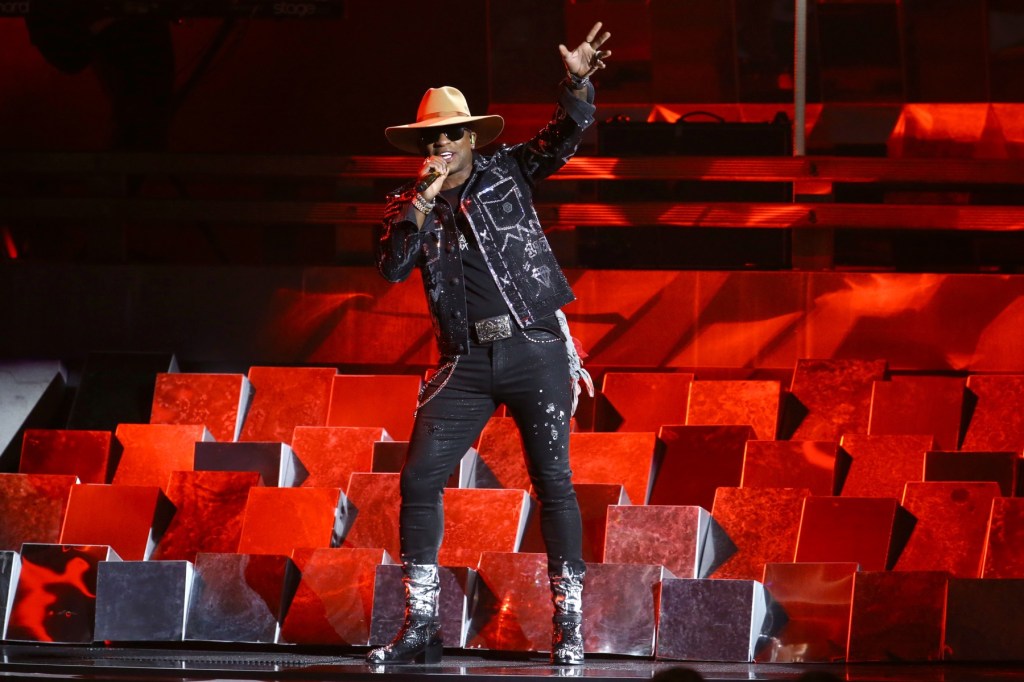 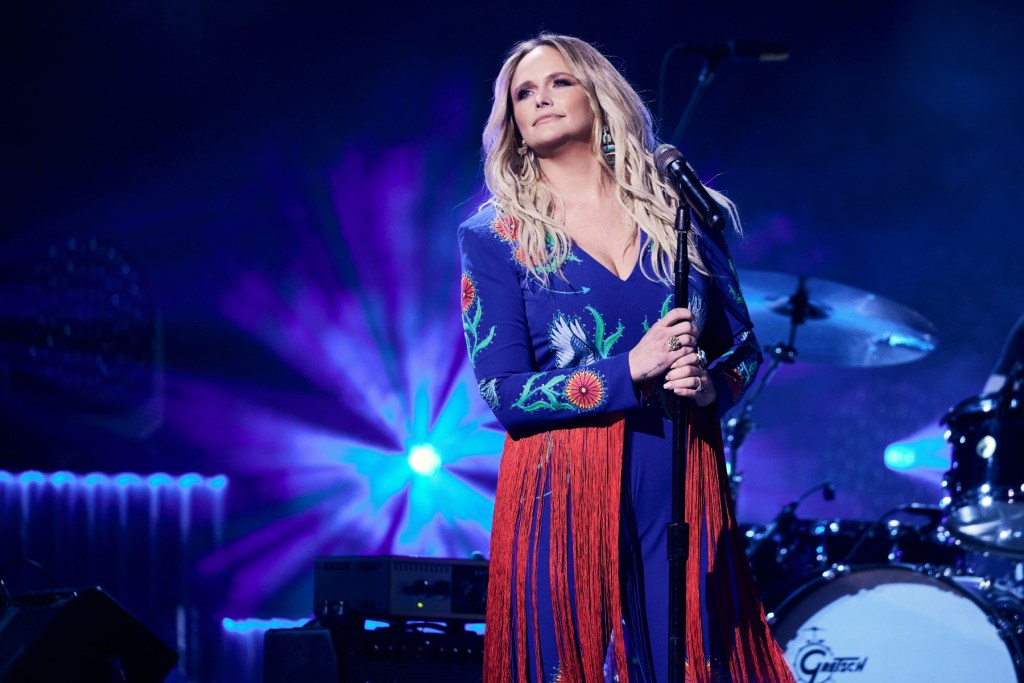 Worst: The producers miss an opportunity with Miranda Lambert.

Few canons in pop county are as mint as Miranda Lambert’s. And hits like “Kerosene,” “Mama’s Broken Heart,” “Bluebird,” “Little Red Wagon” and “Gunpowder and Lead” are undeniable bangers. So undeniable that none deserves the short shrift of being reduced to a 45-second snippet in a medley, like all five tunes were during last night’s show-opening performance. Who even likes medleys anymore anyway? Who ever liked medleys at all? Given her CMA bona fides — 14 trophies and nearly as many performances to match — the reliably great Lambert is more than up to the task of carrying a barn-burner kick-off. But last night’s decision by the CMAs to play it safe felt like a missed opportunity. 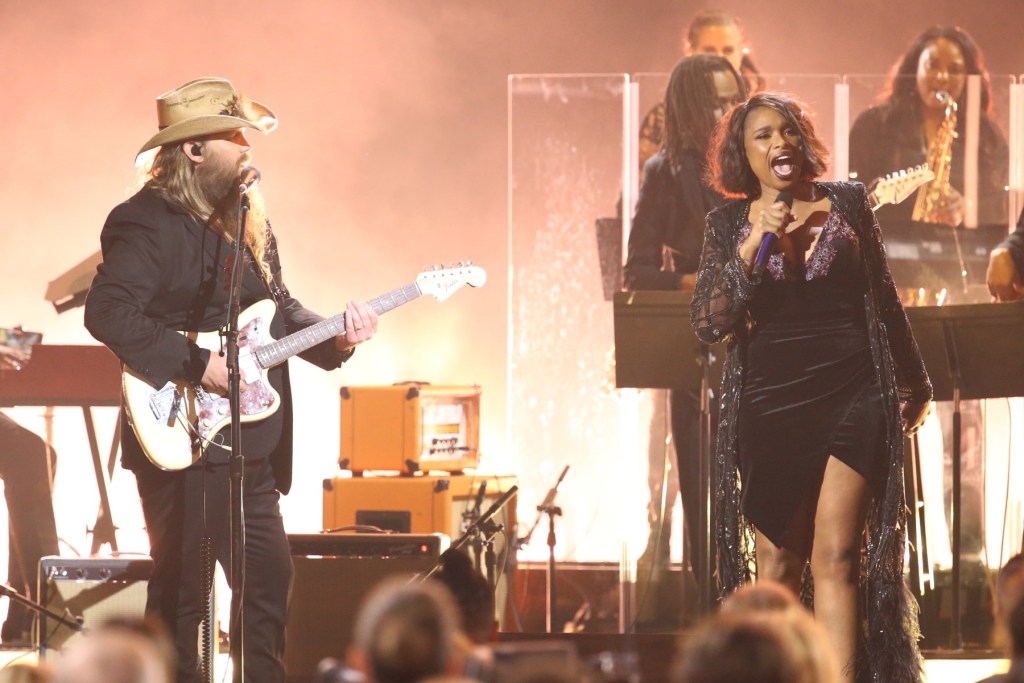 When vocal gymnast Jennifer Hudson graces the CMAs with her presence (and pipes), the show knows to show her the respect of not making her sing with Luke Bryan or Blake Shelton. Seriously, what singer in the arena full of stars other than Chris Stapleton could pull off joining Hudson for Aretha Franklin-styled versions of “Night Life” and “You Are My Sunshine”? No question Hudson — who starred as the Queen of Soul in this year’s biopic Respect — could’ve handily brought the house down on her own. But Stapleton — no stranger to show-stopping CMA duets — elevated an already spellbinding vocal display into a moment of transcendent bliss that made everyone momentarily forget Adele’s about to drop a new record.

WTF: Do Dierks Bentley and Zac Brown have déjà vu?

Dierks Bentley’s 2020 single “Gone” peaked at No. 2 on the Billboard U.S. Country Songs chart last year. A showing so good the singer tried to summon a second strike of lightning by renaming it “Beers on Me” and bringing mononymous bros Breland and Hardy as featured guests. With those two in tow, Bentley performed “Beers on Me” at last night’s show. Or did he play “Gone”? It was hard to tell tbh. One thing that’s definitely for sure is that, soon after, Zac Brown Band got nostalgic with a performance of its 16-year-old star-making single “Chicken Fried,” revamped for 2021 and renamed “Same Boat.” In each case, it seemed Bentley and ZBB took a page out of John Fogerty’s book, rewriting their own “Run Through the Jungle” as “The Old Man Down the Road.”