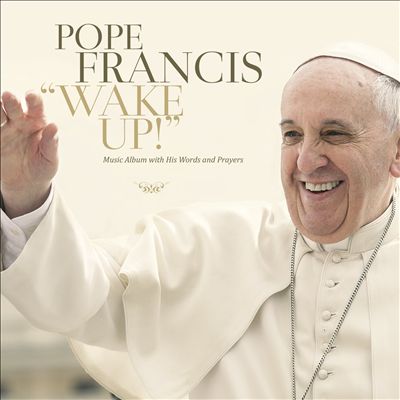 Pope Francis’ message of peace and economic justice has been an inspiration to millions of people all over the world. How’s his music? Um … infallible! Wake Up! sets his speeches and prayers (in Spanish, Italian, Portuguese and English) to pop, rock and classical compositions performed by Italian session musicians, several with roots in the country’s Seventies rock scene. You can hear that influence in the tubular synth noodling that opens “Annuntio Vobis Gaudium Magnum!” Other songs nod to Francis’ South American background. The only song in English, “Wake Up! Go! Go! Forward!” is the most rocking, riding heraldic metal riffs and a fire-tongued solo into a sermon on activism. Usually, the music – some of which is quite lovely – veers closer to the New Age neoclassicism of Vangelis or Kitaro, a warm fit for Francis’ tender, elegant speaking voice. But if the sonics bathe us in soft Sunday-morning light, the message is pure punk-rock redemption. Speaking to an amped-up Brazilian crowd on “La Iglesia No Puede Ser Una ONG!” he entreats, “I want the noise to go out, I want the church to go out onto the streets.” Keep bringin’ the noise, Your Holiness.