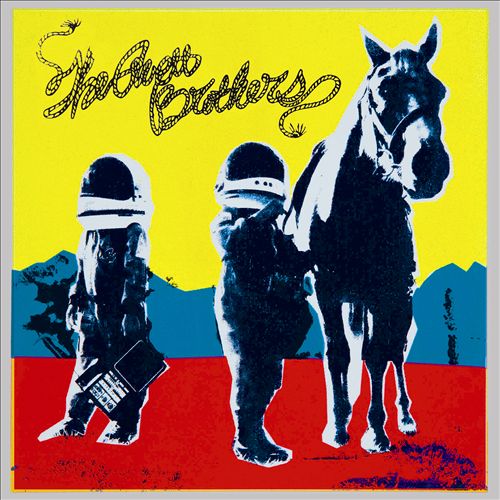 With echoes of old-timey string bands, singalong folk revivalists,boozy Americana roots rockers and big-box singer – songwriter softies, the Avett Brothers have carved out a remarkably successful 21st-century space for themselves. On each of their last three albums, producer Rick Rubin has helped shape their sound without changing the artisanal recipe. On True Sadness, however, the hip-hop-schooled song swami finally, gently, ushers the Avetts into the pop arena. Some may be startled. But given their restless ambition and Rubin’s pedigree (everything from the Beastie Boys to Jay Z to Tom Petty), the only surprise is that this move comes on what, by some measures, is their most heart-baring LP, staring down loss and fingering scars amid the good-time jams.

You could hear the grooves ramping up on “Satan Pulls the Strings,” a funky, hippie-skirtspinning hoedown from last year’s Live, Vol. 4. Now, that song appears as the keystone of True Sadness; it’s a fiddle-and-banjo-driven battle for the soul, goosed along by EDM synth belches, freestyle-ready beats and a Flea-grade bass line, while Seth Avett testifies that “God is in the song and the devil’s in our feet!” like a deranged, Auto-Tuned preacher. It’s a goofy pileup of signifiers, but charming too. Ditto the gospel stadium-stomp of “Ain’t No Man,” a self-reliance tent revival that reprises Dylan’s maxim that you gotta serve somebody. “You Are Mine” and “May It Last,” meanwhile, are pumped-up psychedelic pop with curlicuing electronics and strings (the band has a cellist, a fiddler and a violist in its ranks), and pep-talking love pledges that channel the Beatles via the Flaming Lips.

It’s all effective enough. But it feels unnecessary. The Avetts’ power and soul have always been rooted in their simplicity,clarity and raw sibling harmonies – that American-music gold standard, ringing with bedrock truth whether dissecting heartbreak or boozing it up in the bathroom. For the former, see “Divorce Separation Blues,” which masks its pain with melodic strut and high-lonesome yodeling from recent divorcé, Seth. For the latter, there’s “Smithsonian,” a self-deprecating banjo-and-guitar lark slinging sad barstool punchlines.

It’s in this elemental balancing of sorrow and joy that the band burns hottest. On the title song, a tight beat propels verses alluding to rehab, toxic masculinity and universal hurt – “The way it seems is that no one is fine,” the brothers holler on the hook. But it feels like the record’s most profound celebration – just joyous strumming, bowing and the sound of earnest voices collectively making light out of dark.