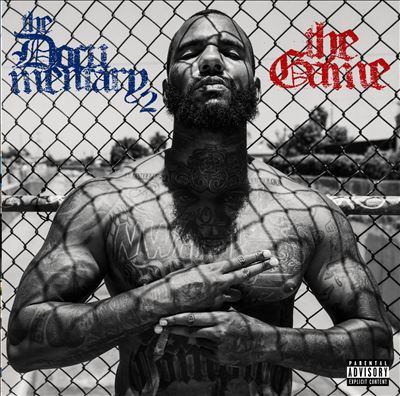 The Game’s sixth album, and the decade-late sequel to his multi-platinum debut, is mostly a chance for the Compton MC to treat the the last 25 years of West Coast rap as his own personal playground.  Part high-concept (tracks flow as seamlessly as a hip-hop opera), part low-concept (the reigning master of the obscene hashtag can’t resist a sex skit called “Sex Skit”), it’s a valiant attempt to connect all the dots between the Los Angeles seen in Straight Outta Compton and the one Kendrick Lamar imagined on To Pimp a Butterfly.

At two discs, 36 tracks and nearly two and a half hours, The Documentary 2 has the ambitions and emotional heft of a big-budget blockbuster. But its storyline is fractured into a dreamlike spill, a pile of loose threads left for the listener to piece together. Our narrator gazes at the distant past, the recent past and the tumultuous present in a whirlwind of rhymes – tales of young Game getting into fights without scratching his Nikes, doses of nostalgia for his debut LP, and multiple references to the racially motivated massacre at a black Charleston church this summer. As usual, Game’s favorite way of looking back on his own life story is through constant nods to other artists. On “Step Up,” he raps in a flow made famous by Biggie over a sample made famous by Tupac. On “On Me,” he raps like Nas; on “The Ghetto,” he brings Nas out for a guest verse. He dreams of being Eazy-E on “Made in America,” then throws the mic to Eazy’s 31-year-old son Lil E on “Outside.” On “Gang Bang Anyway,” he even goes way back like KRS-One, teaching about the 1972 shooting that kickstarted L.A.’s gang wars and linking everything back to slave ships and COINTELPRO.  And while no one in the cast outshines the star, his guests seem hand-picked to represent schools old (Busta Rhymes, Q-Tip) and new (Future, YG), not to mention the West Coast (Dr. Dre and Ice Cube, Kendrick Lamar), the East Coast (Nas, Diddy), the South (Scarface, Lil Wayne) and the Midwest (Kanye West, Dej Loaf).

A good 10 years past his last hit singles, the Game isn’t trying for a radio crossover anymore. That makes this sprawling album his most solid release since the original Documentary. It’s nothing more or less than the complex story of a lifelong hip-hop fan who’s happiest when he can see himself as part of the history he embraces so vocally.