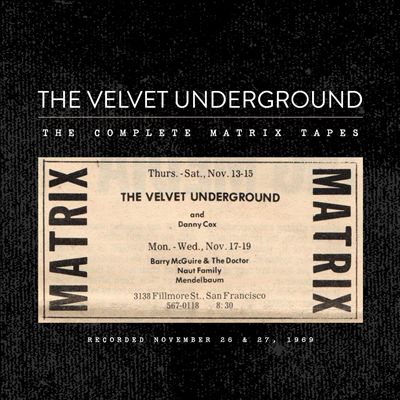 There are many Velvet Undergrounds – the avant-pop shockers of The Velvet Underground and Nico, the proto-punk noisemakers of White Light/White Heat, the folk-rock redemption-seekers of the self-titled third LP, the coulda-been mainstream contenders of Loaded. And then, as this four-disc set shows, there was the live band, which was something else again. In its sprawling way, The Complete Matrix Tapes is the Europe ’72 of Velvet Underground releases, and in the same way, it’s one of the band’s defining documents.

The set collects recordings made during four performances in San Francisco over November 26th and 27th, 1969. This is the band post-John Cale and Nico, with newcomer Doug Yule starting his second year. It’s the Velvets less as confrontational freak show, more as a hot-jamming late-Sixties rock band, captured in the middle of a residency at the Matrix – a small club on Fillmore Street launched by the Jefferson Airplane’s Marty Balin, which had a high quality, four-track recording set-up and a Velvets fan as owner/manager. These are the only multi-track live recordings ever made of the band. Some of the performances, which are uniformly magnificent, first appeared in lower-fidelity mixes on 1969: The Velvet Underground Live, and 18 of these recordings surfaced last year on bonus discs in the “45th Anniversary Super Deluxe” reissue of The Velvet Underground. The band played seven or eight nights at the Matrix over a two-week period – many equally hot, some documented on The Velvet Underground Bootleg Series Volume 1: The Quine Tapes. But these appear to be all the surviving multi-tracks.

And what a find they are. For one thing, the guitar interplay between Lou Reed and Sterling Morrison would never be better. Listen to their breathtaking rhythm ping-pong throughout “What Goes On,” driven by Moe Tucker’s relentless WHAP-pause-WHAP and Yule’s swarming Phantom of  the Opera organ. It’s music to make you grin like an idiot, dance yourself clean, and fuck into oblivion – nearly nine minutes of tilt-a-whirl riff repetition that comes to a dead stop, like a needle being knocked out of the groove, followed by hilariously anemic applause, no doubt because many fans couldn’t clap until the room stopped spinning.

Velvet jams were generally more about building centrifugal groove-force than about one guy noodling over another chopping out time. But Reed’s free jazz affinities come out in two wild takes on “White Light/White Heat” – the chill eight-minute version released on 1969, and a riotous nine-minute version that appeared in low-fi on The Quine Tapes – with solos elevating Roger McGuinn’s “Eight Miles High” template (a Reed favorite) to the next level, capped by white-out endings. And in the 37-minute feature-length film noir performance of “Sister Ray,” another recording upgrade of a Quine Tapes highlight, you get a virtual textbook of VU guitar dramaturgy.

The reimagining of old songs is impressive. Who’d’ve guessed what a sexy jam “Waiting For My Man” could be, slowed down from the original, or how much it could deepen the narrative? On the 13-minute version included here, also on The Quine Tapes, Yule and Reed harmonize the line “feel sick and dirty, more dead than alive” like they’re singing an old blues about aching for a lover – which, of course, they are. Morrison bends bright notes like his laconic hero Mickey Baker, or like Jerry Garcia trapped in amber, the interlocking guitars chugging like freight train wheel assemblies through the mind of a sated junkie foraging for future fixes, Reed singing blissful “ooo-ooo-woos” and whistling like Otis Redding on “Dock Of The Bay,” the song (released one year prior) whose lazy groove it echoes.

But the most touching moments on these recordings are intimate ones, and mostly involve songs yet to be finalized in the studio. The Matrix was a small club, partway between the jammed cabaret vibe of Max’s Kansas City and the psychedelic ballrooms the band often played. In addition, they were playing a residency with, one assumes, a number of return customers (future Reed guitarist Robert Quine claimed he only missed one show), making for a conspiratorial atmosphere. You sense it in Reed’s stage banter. What rock musician performing in starry-eyed San Francisco in late-Sixties introduces a song like this?

“This is a song about the sorrows of the contemporary world, of which I know we all know so well. At least, I read about it all the time. It’s like, one day – this is when I was in college, right? – and I woke up, 6:30 in the morning because I get up early, and I put on the radio, and they said, y’know, ‘So-and-so truck driver today ran over his baby son’s head and it burst like a watermelon.’ And then they said, ‘It’s 22 degrees out.’ So I figured, on all levels, there was no reason ever to go out again. I stayed indoors for about eight months. Also passed with honors in Kierkegaard – that’s ’cause I understand, y’know, the existential leap. Anyone who lies in bed at 6:30 in the morning listening to that has to. Anyway, after that communism was the only answer for me, I felt. And if you can’t be a communist and make money, then you have to be a rock & roll singer. At least in Hoboken … So anyway, this is a song called ‘I Can’t Stand it Anymore.'”

Wiseass, dead-serious, vulnerable, steely, street-smart, book-smart, absurd, fatalistic – and dude hasn’t even started the song yet. As the band peels off into a panic attack of a song abated only by the invocation of a girlfriend who is likely long-gone, you can add to that list two additional qualities: high-strung and irredeemably romantic. It’s a startlingly vivid picture of the artist as a young man.

There’s much more: the pre-revision, tenderly queer “New Age,” a superior song to the Loaded version in every way; “Over You,” a old-school pop ballad that might have been written during Reed’s days as a for-hire songwriter at Pickwick;  a couple of hot takes on “We’re Gonna Have A Real Good Time Together” (one of which wound up on 1969, and was echoed throughout the Seventies when Patti Smith Band used it as a set-opener); a magnificently cresting “Ocean;” gentle early versions of “Sweet Jane” and “Rock and Roll,” and four sweetly leering versions of “Some Kinds Of Love.” Even by the final one, you will likely remain baffled as to what one does on the carpet with jelly on one’s shoulder. But as Reed always maintained, no kinds of love are better than others. Don’t knock it ’til you’ve tried it.