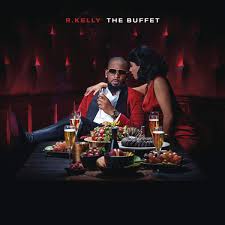 “Good evening, ladies,” R. Kelly announces at the start of The Buffet. “Shall we start with hors d’oeuvres? I can tell your body’s been lacking the platter of satisfaction your body deserves.” His metaphor of choice on his 13th album might be culinary, but it’s all sex on the menu. What, you were hungry for something else at Chez Kelly? That’d be like ordering sashimi at Western Sizzlin. After beginning with a spoken-word poem, titled “The Poem,” he segues into “Poetic Sex,” crooning, “My sex is poetic/I’m about to get you mad pregnant.” He brings hip-hop cooks into his kitchen, from Lil Wayne (“Switch Up”) to Juicy J, who guests on the clever “Marching Band” (which is what your bedsprings are gonna sound like, girl). The chef’s choice is his lush Jhené Aiko duet “Let’s Make Some Noise,” though Tinashe sounds right at home in “Let’s Be Real,” where he begins with the pithiest couplet here: “No disrespect to the things that you want/But girl, you fucking crazy.”

Kelly earns his title in the second half, which is where he stretches out stylistically. “Sufferin’ ” is some surprisingly gritty vintage Memphis soul à la Hi Records, and “Wake Up Everybody” and “Keep Searchin’ ” go for a plush early-1980s quiet-storm sound. The weirdest highlight is “Barely Breathin'” (no relation to the Duncan Sheik tune), where Kelly decides to duplicate the precise sound of a Foreigner power ballad circa Agent Provocateur – he even sings the word “lonely” exactly like Lou Gramm, the kind of achievement that Kelly clearly labored over.  But a more typical sample from this buffet is “Sextime,” which details the kind of time he desires to spend with you – as if there’s any other kind of time on the Kells clock.