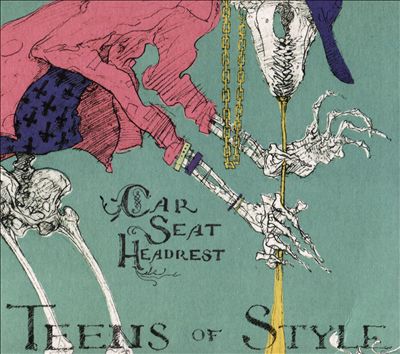 Five years ago, a teenager who now goes both by Will Toledo and Car Seat Headrest was sitting in the back of the family car somewhere in Virginia, writing songs — a young man besotted with backwards-playback effects like John Lennon nearly half a century before him. Eleven self-made, Bandcamp-posted albums later, he’s got a great backstory and an even better back catalog, which he’s culled and reworked for his first old-fashioned LP release. It’s the best classic-rock record anyone under 50 is likely to make this year.

The defining aspect of Toledo’s music is its fluency between indie and old-school sound — the way he uses low-fi production moves as much for punctuation, dramatic asides and Brechtian devices as ends-unto-themselves, in jump-cuts between full-frequency FM glory and iPhone speaker noise that must seem utterly logical to someone whose entire adult life has been spent clicking between parallel worlds of music history. See the magnificent Nevermind-style guitar tsunami at 3:16 on “Sunburned Shirts,” the stray digital stutters and instrument drop-outs on “Times to Die,” the fantastic synth-pop meets The Who Sell Out! cum Guided By Voices grandeur of “Los Borrachos (I Don’t Have Any Hope Left, But the Weather is Nice).”

In this artistic and emotional coming-of-age document, it’s Toledo’s lyrics and vocal presentation that seem most fully-formed.  “Biting my clothes to keep from screaming/taking pills to keep from dreaming,” he sings at the start of “Something Soon,” adding that he wants to “sing this song like I’m dying” before jetting up to heaven on the chorus, then multi-tracking himself into a gorgeously ragged a capella mid-section. Toledo’s verses are rife with the sorts of teen-age drama that rock was invented to channel. They deliver self-awareness and self-loathing in various flavors of shrieks, mumbles, grab-the-ring hollers, over-myself deadpanning and falsetto bliss, all the more resonant for the sense that they’re being sung into the mirror — which for a while, anyway, they effectively were. On “Strangers,” Toledo sings about loneliness, a town he’s sick of, and God, namechecking his moniker like a third-person diary entry. “Car Seat’s nervous and the lights are bright/When I was a kid I fell in love with Michael Stipe/I took lyrics out of context and thought he must be speaking to me,” Toledo sings near the end, just before launching into nearly two minutes of ecstatic upper-register ooo-wee-ooos. It’s a song made to scream along with, alone. And I bet it’ll make R.E.M.’s ex-frontman blush.