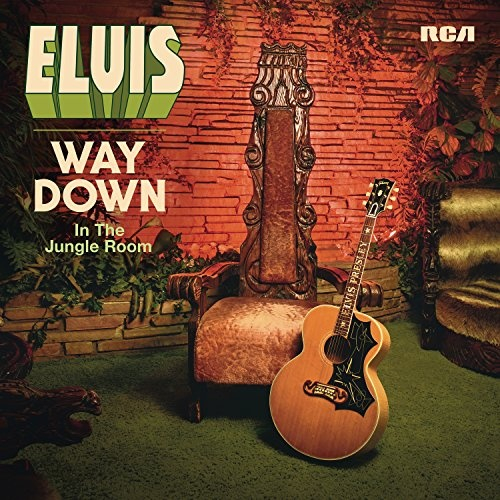 With its shag carpeting, Polynesian flair and indoor waterfall, the “Jungle Room” in Elvis Presley’s Graceland den epitomized the kitsch excess of the King’s declining years. But once converted to a home studio in 1976, the verdant oasis became the unlikely birthplace of his final recordings. Way Down in the Jungle Room showcases 16 master takes released on the last two LPs of Presley’s lifetime, a chance to eavesdrop on a troubled performer pulling himself together for a final sprint at artistry. A second disc of outtakes – featuring muttered wisecracks, false starts, and a couple promising alternate arrangements – adds background atmosphere but is mostly of historical interest.

What separates the triumphant cuts from the merely adequate is less the quality of the material and more the star’s ability to connect with it. “She Thinks I Still Care” may be the finest composition here, but Elvis’s technically proficient dramatization lacks the heartrending vulnerability of George Jones’ classic rendition; Neil Sedaka’s “Solitaire,” best known as a Carpenters hit, is pure weepy schlock, but Elvis belts it so shamelessly you can imagine how the lyric’s melodramatic sense of isolation might have resonated with Graceland’s tortured recluse.

Though Elvis was often faulted as a lazy performer in his later years, his final recordings actually suffer when tries too hard, when he overworks his enunciation or goes for broke when some restraint is called for. But more often he strikes the ideal balance between effortlessness and self-awareness – looping his tongue around the phrase “complicated lady” on “Moody Blue,” swaggering orgasmically through “Way Down” and gliding through the Johnny Ace classic “Pledging My Love.” In those moments of ineffable Elvis-ness he’s as dangerously seductive as he’d ever been.