On July 17th, 1967, the pioneering jazz saxophonist John Coltrane died of liver cancer. He was 40 years old. Four days later, the composer and saxophonist Ornette Coleman – who coined a movement with the title and audacity of his 1961 album Free Jazz – performed the closing hymn of Coltrane’s memorial service at St. Peter’s Church in midtown Manhattan. Coleman eulogized his fellow seeker with “Holiday for a Graveyard,” a spearing alto-sax hosanna over the euphoric thunder of drummer Charles Moffett and the bassists Charlie Haden and David Izenzon.

In another summer, 48 years on, the jazz world gathered uptown to celebrate Coleman, who passed away on June 11th, 2015, at 85 of cardiac arrest. His memorial service, on June 20th at Riverside Church, was an epic procession of memories, praise and music including solo farewells from two veteran improvisers, pianist Cecil Taylor and saxophonist Pharoah Sanders. There was a Coltrane too – John’s son Ravi, a saxophonist, who played soprano horn in Coleman’s “Peace,” an exuberant duet with pianist Geri Allen. Another connection to the ’67 ceremony: Moffett’s son, bassist Charnett, in a brawny quintet with saxophonist Joe Lovano and Coleman’s son Denardo on drums igniting the signature ballad, “Lonely Woman,” from Ornette’s 1959 mission statement, The Shape of Jazz to Come.

“Holiday for a Graveyard” only survives as an echo-laden audience bootleg. Coleman’s service was filmed and recorded with care, and the music made that day is shared, in full, in an appropriately monumental release, Celebrate Ornette. Produced by Denardo and issued by his label, Song X Records, the set – in a five-disc CD/DVD package and a deluxe box with those discs, four vinyl albums and an LP-size book – also contains a June 2014 tribute concert, also called “Celebrate Ornette,” staged at the Prospect Park Bandshell in Brooklyn. That show included Coleman’s last public performance, in a night of homage to his iconic works and creative evolution by peers, sidemen and devotees. Among them: guitarists James Blood Ulmer, Thurston Moore and Wilco’s Nels Cline; saxophonists Henry Threadgill and John Zorn; the Patti Smith Group; and bassist Flea of the Red Hot Chili Peppers. 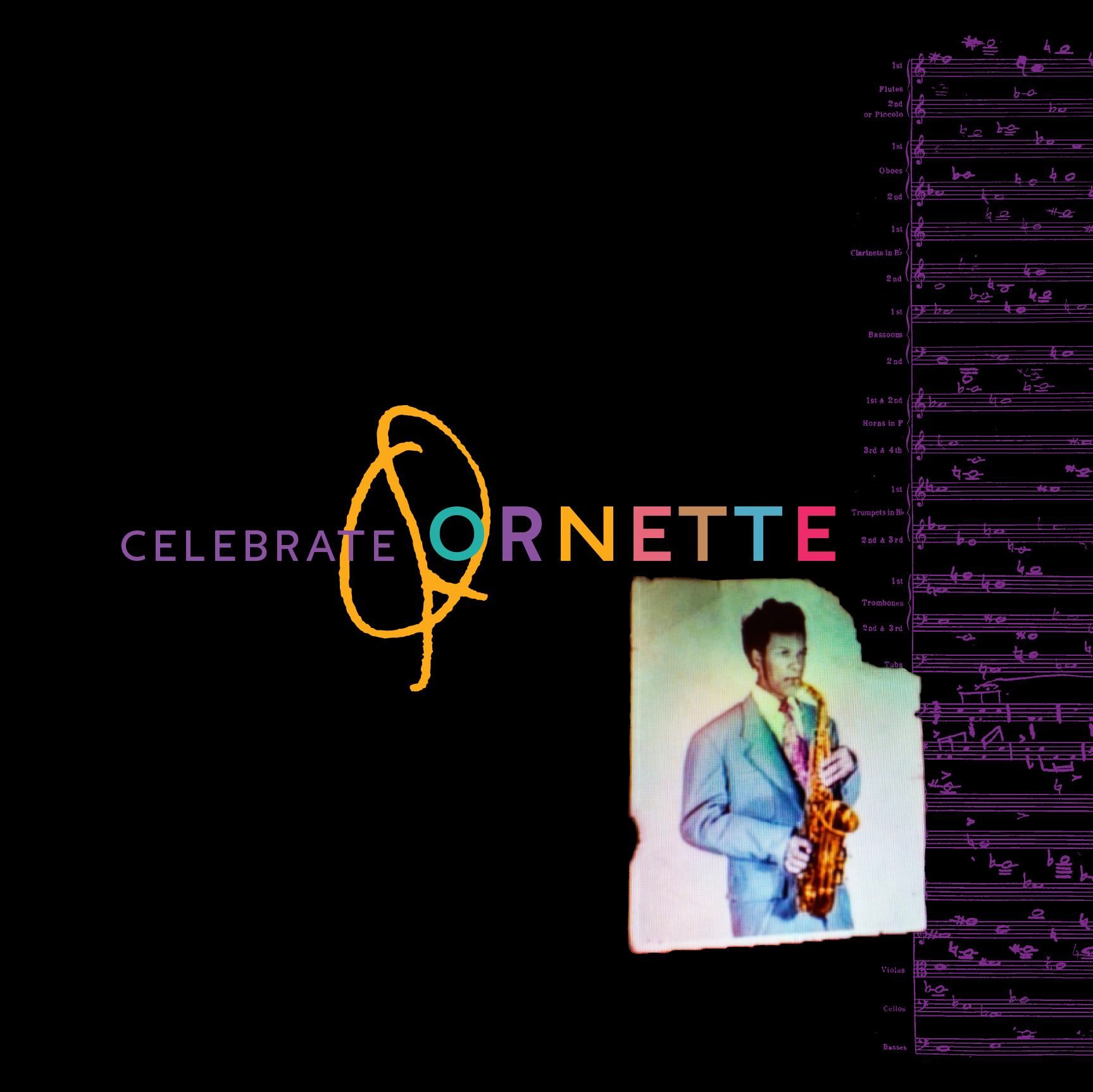 “Ornette’s work is so profoundly tied to the notion of liberty,” Living Colour guitarist Vernon Reid told me the day after Coleman’s passing for a tribute in Rolling Stone. Reid summarized Coleman’s lifelong struggle as a revolutionary in composition and improvisation by quoting the African-American statesman Frederick Douglass: “Freedom is a road seldom traveled by the multitude.”

But that evening in Prospect Park, then at Riverside Church, the multitude turned out for Coleman.

Celebrate Ornette opens with a classic Coleman gambit, a playful inversion of the norm: In Brooklyn, the honoree was his own opening act. Coleman kicks off that show with a double quartet of horns and groove, anchored by Denardo’s house band Denardo Vibe. There is a funky sprint through “Ramblin’,” from Coleman’s 1960 LP, Change of the Century, and – no surprise for the native Texan – a straight-up blues, “OC Turnaround.” Another twist: In the early 2000s, Coleman frequently challenged his concert audiences with eccentric visual components such as contortionists and a ritual body piercer. Here he leaves generous solo space to a tap dancer, Savion Glover.

Coleman’s long, inspirational reach, out of jazz and into rock via Bay Area psychedelia – especially the Grateful Dead’s Jerry Garcia and Phil Lesh – and post-punk, is represented early. A pair of Dead associates, pianist Bruce Hornsby and saxophonist Branford Marsalis, tangle and climb in sprightly duet. Moore and Cline’s rendition of “Sadness” is a striking union of guitar-harmonics waterfall, evoking Coleman’s impact on the free-rock aesthetic in Moore’s old band Sonic Youth, and loyally melodic lament. And Flea, originally a trumpeter and steeped in jazz from childhood, solos like an anchor, nimble and firm, from inside the romp of saxes and counterpoint in “Blues Connotation” and “Broadway Bounce.”

As generous as it is in weight and scope, Celebrate Ornette is not entirely comprehensive. Coleman’s orchestral work is not represented, and his classic trios and quartets of the Sixties are evoked by pieces they made famous but are driven here by Denardo Vibe in a thicker, rhythmic urgency closer to Coleman’s electric-dance band in the Seventies and Eighties, Prime Time. Yet his best-known Prime Time theme, a whirling-alto hook generally called “Dancing in Your Head” for its appearance on the 1977 album of that name, previously coursed through 1971’s blazing Science Fiction and figured in Coleman’s 1972 symphony, Skies of America.

For Coleman, no composition was ever truly finished – harmony, melody and rhythm were equal and eternally in flux – and that is certified here in the two versions of “Dancing in Your Head,” one a Prime Time reunion at the memorial, the other with Hornsby and Marsalis bringing the second-set-Dead flashes in Prospect Park. There is also a Brooklyn version of the title piece from Coleman’s 1986 collaboration with guitarist Pat Metheny, Song X, fortified by the ancient strength of Morocco’s Master Musicians of Jajouka – with whom Coleman first recorded in 1973 and who appeared on Dancing in Your Head. The bloodlines are knotty and, without fail, life-affirming.

Celebrate Ornette is an excellent liftoff to Denardo’s label, stoking expectations for releases from his father’s legendary cache of unreleased recordings. The box set is also a spirited complement to Ornette’s sartorial legend, the way he set off the gleam of his white, plastic alto sax with sharp-cut suits in outlandish decorative patterns and irradiated primary colors. The booklet, with essays by Denardo, Ulmer and record producer John Snyder, is a feast of informing images, especially one gatefold shot of what looks like the Prime Time–era Ornette in an electric-blue suit after a show – his back to the camera, lying on his side to sign autographs for the young, obviously non-jazzbo fans pressed against the stage. One guy is wearing a Black Sabbath Vol. 4 T-shirt.

When I interviewed Coleman for a Rolling Stone feature in 1989, he acknowledged the outraged reception – charges that Coleman was an atonal, undisciplined charlatan – when he made his New York club debut in 1959. Coleman recalled, with a soft laugh, a magazine cartoon showing a waiter dropping a tray of dishes in a restaurant. “And the woman at the table said, ‘Oh, listen, darling, Ornette is playing our favorite song.'”

Celebrate Ornette is the sound of Coleman taking his last bow and leaving his extended family of believers to send the music forward.