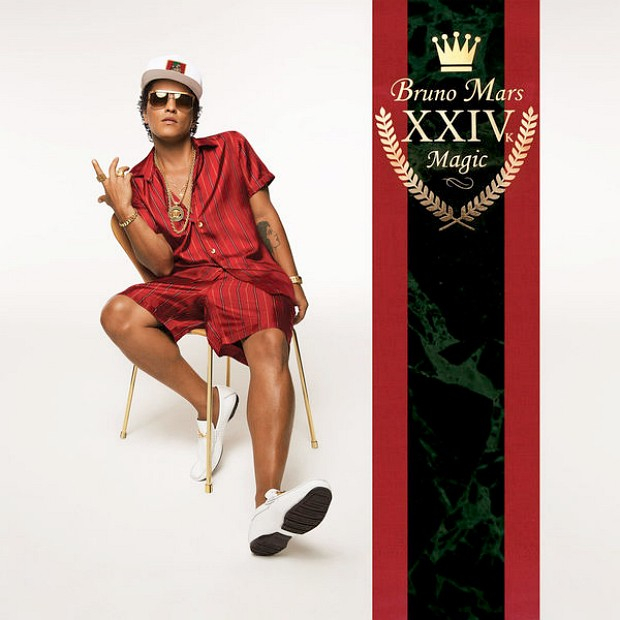 Though 24k Magic is shorter than any Stooges record, human Super Bowl halftime show Bruno Mars still wears a lot of hats: giddy uptown-funk savant, bumping-and-grinding R&B time-traveler, Ashford & Simpson–esque quiet-storm balladeer. He also sounds like he’s wearing airbrushed overalls too since the majority of the album hearkens back to the new jack swing and Cooleyhighharmonies of turn-of-the-Nineties charts ruled by Boyz II Men, Bell Biv DeVoe and Bobby Brown. The only thing America’s greatest pastiche pop star is missing on his third album is the hooks to hang it all on.

Mars wanted Magic to recreate the nostalgic wonder of the school dances he attended in the Nineties – and his crowded productions, infectious attitude and soaring voice go well beyond “tribute” into the realm of “IMAX reboot.” “Perm” is a future-shocked James Brown hip-hop hybrid that sounds like an update of please-please-pleasers Son of Bazerk; “That’s What I Like” brings the silky vibes of 12 Play–era R. Kelly into the boom of modern trap; “Finesse” is a modern BBD bite down the rat-a-tat “Poison” snares. The chorus to “Calling My Lovelies” – “I got Alesha waiting/Iesha waiting/All the –eeshas waiting on me” – feels like he’s writing himself into the adult epilogue of Another Bad Creation’s playground romance complete with a thirsty phone call to Halle Berry’s answering machine. The arrangements throughout are simply outstanding, bubbling and percolating with ADD explosions of melodic counterpoints, overdubs, subplots and funky worms.

But while his funk game is strong and swagger is stronger, Bruno’s acclaimed hook-writing (which has garnered four Number Ones for himself and tons of co-writes on other chart-toppers) has seemingly taken a backseat. Lyrically, it seems like he’s trying to recall the Nineties subliminally via breadcrumbs scattered throughout the record, saying “freaking me” (Silk) or “nice and slow” (Usher) or “ain’t nobody” (LL Cool J via Chaka Khan) or “damn” (Mr. Show sketch Two Plus One Minus One). If it’s intentional, it scans as cloying; if it’s accidental, it scans as lazy. “Versace on the Floor” is the umpteenth tribute to Marvin Gaye’s “Sexual Healing” in an era that didn’t need them from Wiz Khalifa, Nelly, Wale or Kygo. Lead single “24k Magic” is already drooping its way back down the charts and it’s not impossible to understand why when compared to the sugar-coated bombast of “Uptown Funk” or “Locked out of Heaven.”

Bruno Mars: The Private Anxiety of a Pop Perfectionist

So, 24k Magic may not be the most glittering display for Bruno Mars the pop star, but fans can rest assured it is a shining moment for Bruno Mars the producer, arranger and nostalgia curator. Nothing on his level of success gets to look or sound or feel like this – no diggity, no doubt.