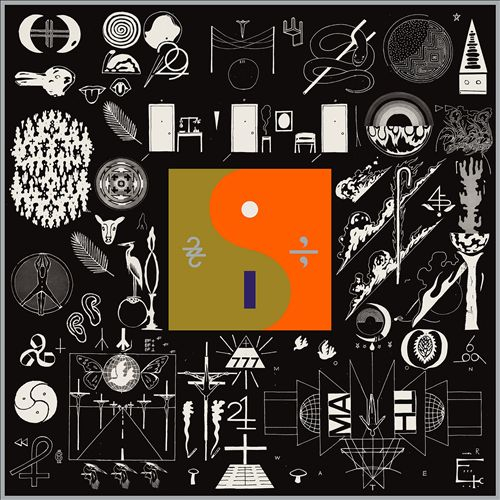 Who’d have thought that a bearded guy from the wilds of Wisconsin could help shape music from Chicago to London and beyond? But Bon Iver’s Justin Vernon has done just that. Since debuting with the forlorn indie folk of 2007’s For Emma, Forever Ago, he’s carried on a rich conversation with modern pop, collaborating with Kanye West and James Blake while creating a new version of sensitive-guy Auto-Tune soul on 2011’s Bon Iver, Bon Iver. With his long-awaited third album, Vernon completely breaks from his guitar-hugging persona, leaving it in the woods like a Coen brothers corpse as he flexes a mastery of processed vocals, samples, loops, beats, synths and noise, along with more familiar trappings. The results place him alongside pop’s top futurists. Amazingly, it still sounds like Bon Iver.

22, A Million (worked up over a five-year gap during which he doubted Bon Iver’s future) often feels like the work of an artist starting over from scratch. “10dEAThbREasT” staggers through shredded-woofer beats and abraded, dubstep-grade bass shudders, while Vernon’s layered declarations about a love struggle bubble up amid warp-speed samples (from a bootlegged version of Stevie Nicks’ “Wild Heart,” it turns out). Vocals are distressed throughout the set. “715 – CRΣΣKS” is a cyber a cappella soul ballad promising a pop reveal that never comes – it resolves with a parting shot apparently aimed at a lover’s back. “Goddamn, turn around now, you’re my A team,” Vernon blurts, the last syllables stretched achingly with pixilated melisma. It’s a startling line, not just for its emotional payload but because it’s delivered through effects that generally neuter vocal intimacy. Here, they magnify it.

Vernon seems to listen hard to his peers. During “666 ʇ,” you sense he’s absorbed Björk’s digitized orchestrations, and his confessional delivery on “8 (circle)” echoes Frank Ocean’s “Thinkin Bout You” – in many ways, this LP isn’t so different from the introspective soul of Blonde.

Vernon remains an oblique lyricist, but the knottiness can be compelling: Check his technique on the finale, “00000 Million,” as he unfurls rhymes over piano like a hip-hop-bred choirboy alone in a cathedral, lining up “modus,” “gnosis,” “depose this,” “s’pose you can’t hold shit,” “what a river don’t know is” and “slow among roses.” Whatever it means, it’s powerfully evocative. Like the electronics and the typographical-hash song titles, the verbal abstractions are just more masks – Bowie-esque shape-shifting from an artist trying, in his elusive way, to keep things real.