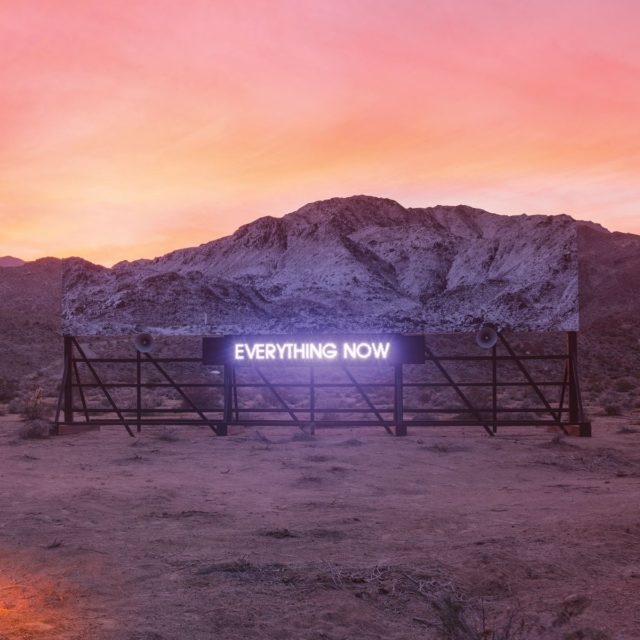 On their last LP, Arcade Fire wrestled with an age-old question: How does an earnest rock band reclaim the music’s dance-floor birthright? Reflektor’s answer sprawled over two discs of impressive groove curation – synth-pop, disco, electro, Haitian rara, dub reggae and more – with help from LCD Soundsystem’s James Murphy, a battery of Haitian drummers and even a cameo by the patron saint of rock & roll transformations, David Bowie. The set was ambitious and frequently dazzling. But sonically and thematically, the LP also pulled back on the emphatic intensity that’s defined the band and made it matter, ever since its landmark 2004 debut, Funeral.

Per usual, Butler’s teen-preacher-cum-rock-star persona steers the ship. The punk rant “Infinite Content” and the loping country waltz “Infinite_ Content” are mirror versions of a single song that takes aim at the digital excess of the streaming era: “We’re infinitely content/All your money is already spent,” Butler declares, recalling the dissatisfied Everymen of the Stones’ “Satisfaction” and Bruce Springsteen’s “57 Channels (And Nothin’ On).” On “Creature Comfort,” a New Order-ish interrogation of “the white lie of American prosperity,” kids lust for fame while they battle self-loathing, starving and cutting themselves. It’s treacherous territory, but the band navigates it bravely, especially when it turns the critical lens on itself. When Butler sings, “I’m a liar/Don’t doubt my sincerity,” he conjures no one so much as Bono as “The Fly” circa Achtung Baby – another earnest dance-rock conversion.

Ultimately,
Everything Now is about having a cultural banquet on offer and still
feeling hungry. “A terrible song on the radio, baby/What else is new?”
laments Butler on “We Don’t Deserve Love,” a queasy, gorgeous ballad
that wonders if the human race has maybe earned its pending extinction. Jury’s
out. But Arcade Fire have made a perfect soundtrack for pondering the question.