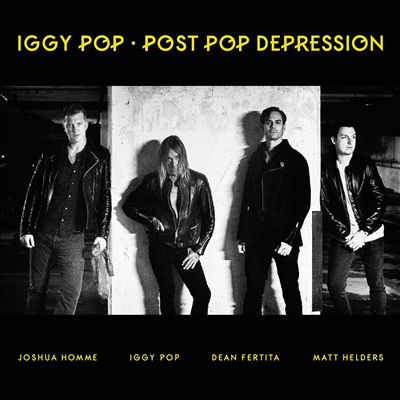 There’s a famous early-Seventies Mick Rock photo of Iggy Pop – wild-eyed in a T. Rex -T-shirt, a pack of Lucky Strikes clamped between his teeth – with his arms around David Bowie and Lou Reed: together, the troika who smacked rock & roll out of its hippie daze and into scarier, more thrilling territory. That Iggy, who once performed blood-soaked after rolling in broken glass and indulged in numerous unhealthy appetites, would be the last man standing of the group seemed inconceivable at the time.

And yet, after re-forming the Stooges in 2003 and launching himself shirtless off world stages with little evident diminishment, the 68-year-old proto-–punk icon will not be stopped. On his awesomely gnarled 17th solo album, he plays the low-rent elder statesman, a spectacularly scuzzball Leonard Cohen still snarling, still hoping to get his rocks off. “America’s greatest living poet/Was ogling you all night,” he sings modestly on “Gardenia,” addressing a girl “much taller and stronger” than he, with an “hourglass ass” and a “powerful back.” (What woman wouldn’t be flattered?)

His sinewy visions are shaped by producer Josh Homme and Dean Fertita (bunkmates in Queens of the Stone Age), and Matt Helders, the hip-hop-snappy drummer with the Arctic Monkeys. Over nine songs and 42 minutes – old-school LP length – they juggle tight and loose, conjuring a ravaged cadaver in a sharp funeral suit. “I’m a wreck/What’d you expect?” Iggy declares on “Sunday,” over Homme’s spiky double-tracked guitar lines until the song lapses into an orchestral ballroom waltz, a cheesy Hollywood fantasia of the afterlife. In Iggy’s cosmology, reality is best served unwashed, and even heaven smells kinda stanky.

On “Chocolate Drops” (evidently what your “shit turns into” when you hit bottom), Iggy’s bandmates echo him with sweet, drag-show call-and-response vocals. “Paraguay” matches Spanish guitar with Byrds-ian 12-string chime while Iggy fantasizes about escaping the modern world, launching into an awe-inspiring rant where he tells someone, “Take your motherfucking laptop/And just shove it into your goddamn foul mouth”; behind him, the band chants about wild animals who never wonder why, but “just do what they goddamn do.”

What’s he so pissed off about? Like Marlon Brando once asked, “What d’ya got?” On the death-obsessed “American Valhalla,” Iggy ponders his mortality, singing, “If I have outlived- my use/Please drink my juice.” Clearly, he hasn’t, but if that juice will confer any of his raw power, sure, man – make it a double.

Watch the five things you didn’t know about Iggy Pop.