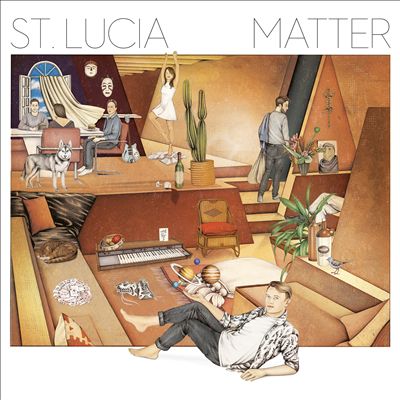 It’s difficult to listen to St. Lucia’s second full-length without thinking of a list of Eighties touchstones: “Home” recalls the high-energy grooves of Prince at his purplest, the synths on “The Winds of Change” sound a little like Madonna’s “Lucky Star.” Ultimately, though, St. Lucia mastermind Jean-Philip Grobler – a South African by birth who performed for Nelson Mandela many years ago – uses touches of 2010s house music to move past the shadow of those obvious forerunners. While Grobler’s music often bursts with light, frivolous energy, this album has an undertone of dissatisfaction that’s new. R&B-tinged songs of longing like the delicious “Love Somebody” temper hooky dance numbers like “Dancing on Glass” and “Physical” (which can get you a little sweaty just listening to it). Then there’s “Help Me Run Away,” co-written with Jack Antonoff – a party anthem that turns out to be a migrant’s plea. “Thought I was living under cover/Now I’m a child, child without a mother,” Grobler sings. “Who was a stranger to the American way/But now I’m fully ingrained to toe.” As ingrained as Grobler may be in American life, though, his music – with its echoes of school choirs and Lionel Richie, tropical breezes and the uncharted waters that surround them – is never that simple.