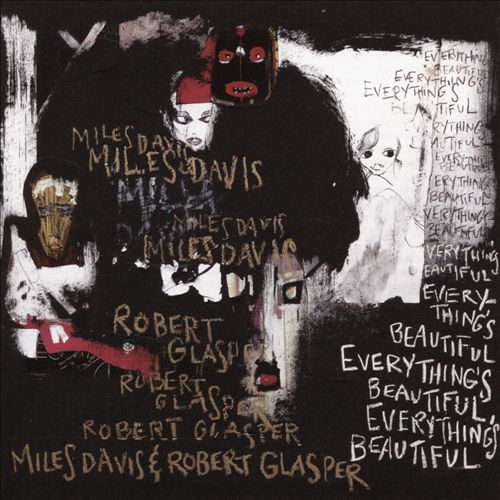 Like any vital art form that’s been around for a couple of centuries, jazz has occasionally threatened to self-fossilize and commit career suicide. A few forward thinking youth-minded contrarians usually arrive to save jazz from standing strong stuck in the mud while the world races by. In the late-Sixties, Miles Davis made electrically enhanced jazz mad popular with hippies and hippies alike via the still totally rad and krunk-gnostic Bitches Brew. Thus liberating his art form from the plantation bondage of smoky dives and three sets a night-seven-days-a-week chicken feed gigs. Miles actually hated the term “jazz.” Like most of the legends who labored under the lash of the j-word, he considered it synonymous with the n-word, but Bitches transcended the jazz word and gave his musician-devotees access to the popular stages and college venues frequented by rock and funk bands in the Seventies.

Glasper primarily functions as a discrete overlord on Everything’s Beautiful, sometimes even as an absentee one. As he explains in his extensive liner notes the process of assembly was organic, guided by voices, suggestions, serendipity, happenstance and on one occasion crate-digging and vino. Glasper revealed in conversation that a smattering of evenings imbibing at fellow-Texan Badu’s house found them scouring her vintage collection of Davis vinyl for options. This spirit-driven path led to the singer emphatically telling Glasper she wanted honor the fabled Prince of Darkness with “a bossa.” Miles’ nephew Vince Wilburn suggested “Maiysha,” a mid-tempo ballad from 1972’s Get Up With It, and voila.

Columbia Records gave Glasper and his crew full access to Davis’ original recordings, which include his raspy chatter – detailed, ribald, cantankerous instruction to musicians between takes. Thus does the gravelly ghost of the most-instantly recognizable speaking and instrumental voices in American music after Louis Armstrong’s ground the sounds you hear on Everything’s Beautiful. Badu’s bossa is an expectantly chill, seductive and scrumptious contribution to Everything’s relaxed, sensual cruise trip.

Vocalist/keyboardist/composer Georgia Ann Muldrow’s revamping of “Milestones” provides the collection with its boldest makeover, however. The original hails from the 1950s hard bop stage of Davis’ evolution, when knotty, driving horn parts were all the rage. Muldrow, an esoteric cult favorite of obscure beatmakers everywhere (and our vote for “The Alice Coltrane of Hip-hop Composition”) tames the beast’s boplexity with ethereal keys, scatting voices, subaquatic bass tones, cyborg swing beats and Glasper’s off-the-meatrack piano improv skills (the producer’s only solo, by the way, on the entire 11-track set).

Davis preferred the term “social music” to jazz, but the cruelly dissenting and dissonant beauty of his Seventies music was how anti-social so many diehard acoustic jazz fans and R&B programmers found his Seventies morph into a hardwired acid-funk rapscallion. The collaboration between former Miles guitarist Scofield and the dazzling Ledisi on “I’m Leaving You,” revives the rambunctious and buck wild Davis of his On the Corner album – a.k.a. the straw that broke all Davis true blue bebop fans minds, spines and hearts in 1972 – as well as providing proof positive of a key Glasper observation: that Miles was not only forecasting hip-hop but making hip-hop before there was hip-hop.

The album’s closing track, “Right On Brotha,” is produced by DJ Spinna and keyboard player Chris Rob. It delightfully gives late-night club currency to two exceptionally gorgeous melodies, one legendary, the other a rescue from the mothball wing of the Davis canon. The latter is a sampling of an untitled and near-forgotten a capella trumpet interlude last heard on the Davis Tribute to Jack Johnson soundtrack. The former involved deploying Stevie Wonder’s harmonica to breathe new life into Wayne Shorter’s haughty and haunting and very well-known “Nefertiti” (FYI: “Nefertiti” is wrongly attributed to Davis in the Miles Ahead movie credits, as is Bill Evans’ expropriated co-composition “Blue in Green,” a controversial and reportedly not unprecedented instance of Davis sticking it to the sideman like he was The Man.)

Glasper and his confreres have used Davis’ inspiration to craft a moving and misterioso assemblage that, true-to-the-living Davis, refuses any scent of museum entombment. The off the beaten path song and singer/rapper selections sidestep the typical kid gloves treatment most jazz cats lay on Miles’ material and the skin graft with beats-the-kids-like approach of other jazz-meets-hip-hop ventures. Our compliments to the chefs and their curator.