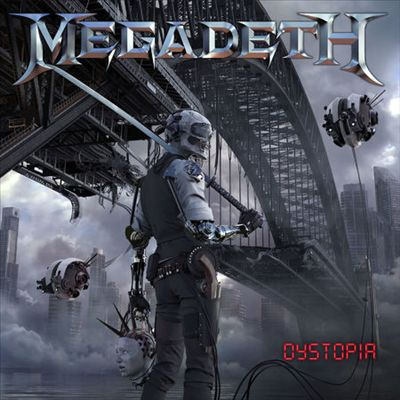 Is Dave Mustaine running for president? The Megadeth mastermind and amateur doomsayer has packed the headbangers’ 15th LP with enough fear-mongering to earn him a podium at a GOP debate, as he snarls about conspiracies (“The Threat Is Real”), the decline of Western civilization (“Lying in State”) and a whole slew of hypothetical horrors, calling the world “one spinning disaster” on “Post-American World.” It’s pretty grim.

But as dour as Mustaine’s worldview seems to be, he still manages to sneak a few laughs past gloomy tunes with titles like “Fatal Illusion” and “The Threat Is Real.” “You’re bad for my health because you make me sick, you prick,” he snarls on “The Emperor,” a track directed at some would-be superstar. Elsewhere, he and his bandmates tackle a cover of the sardonic “Foreign Policy” by punk comedians Fear, whose frontman Lee Ving collaborated with Mustaine on their MD.45 side project two decades ago. (The inherent tongue-in-cheekiness of lines like “eliminate the incompetents” and “survival is supremacy” doesn’t seem quite as self-evident in Mustaine’s sneer, though.)

Luckily for Mustaine, he has assembled a lineup that can play through his pain on Dystopia. The latest additions to Megadeth’s umpteenth role call include Brazilian guitar virtuoso Kiko Loureiro, who wields pyrotechnic shred licks at every turn, and guest drummer Chris Adler, who’s best known for playing death-rattle drums in Lamb of God. Together with founding bassist David Ellefson, the group has rarely sounded tighter or more cutting.

With everything working in concert, Megadeth sound reborn on Dystopia. Gone are the surprisingly un-metal banjo interludes of their last record, 2013’s Super Collider; in their place is some of the most vital and menacing thrash that Mustaine has concocted in years. After all, he knows every winning political campaign needs great fight songs.