Go ahead and call foul. The greedy suits have made two movies out of the last book in the bestselling Hunger Games trilogy because, well, they can divide and conquer by suckering us to pay twice for the same thing. Hell, the Harry Potter movies did it. Twilight did it. And Hollywood will keep on doing it until the golden goose gets vain about its stretch marks and stops laying golden eggs.

On the bright side, The Hunger Games: Mockingjay — Part I comes out blazing. How could it not? Oscar winner Jennifer Lawrence, suited up again as the heroic Katniss Everdeen, is a firebrand for the ages. Returning director Francis Lawrence (no relation), working from a script by series newbies Peter Craig and Danny Strong, delivers the dazzle without sacrificing the smarts. The suspense is killer. Ditto the thrill of the hunt. The film uses the extra time to, of all things, develop characters and give this dystopian fable a human scale.

Non-readers of author Suzanne Collins’ young-adult trilogy will be shocked to learn that there are no Hunger Games in this Hunger Games. The organized, televised Olympic-like events, in which young hotties annually fight to the death to delight the debauched audiences in the big, bad Capitol of Panem, are no more. President Snow (Donald Sutherland, with a sneer that won’t quit) must find another way to quash the 12 districts that rebelled against him.

Katniss is badly shaken. Her home in District 12 has been obliterated. Her mother (Paula Malcomson) and sister (Willow Shields) are missing. Cinna (Lenny Kravitz), her stylist, made the kill list. Her BFF, Peeta (the ever-cheeky Josh Hutcherson), a love rival to homeboy Gale (Liam Hemsworth), has been kidnapped and maybe executed.

And that’s what you missed in The Hunger Games: Catching Fire. If you skipped or blanked on the first Games as well, prepare for a “wait, what?” reaction to match that moment in Interstellar when Matthew McConaughey enters the space-time continuum. 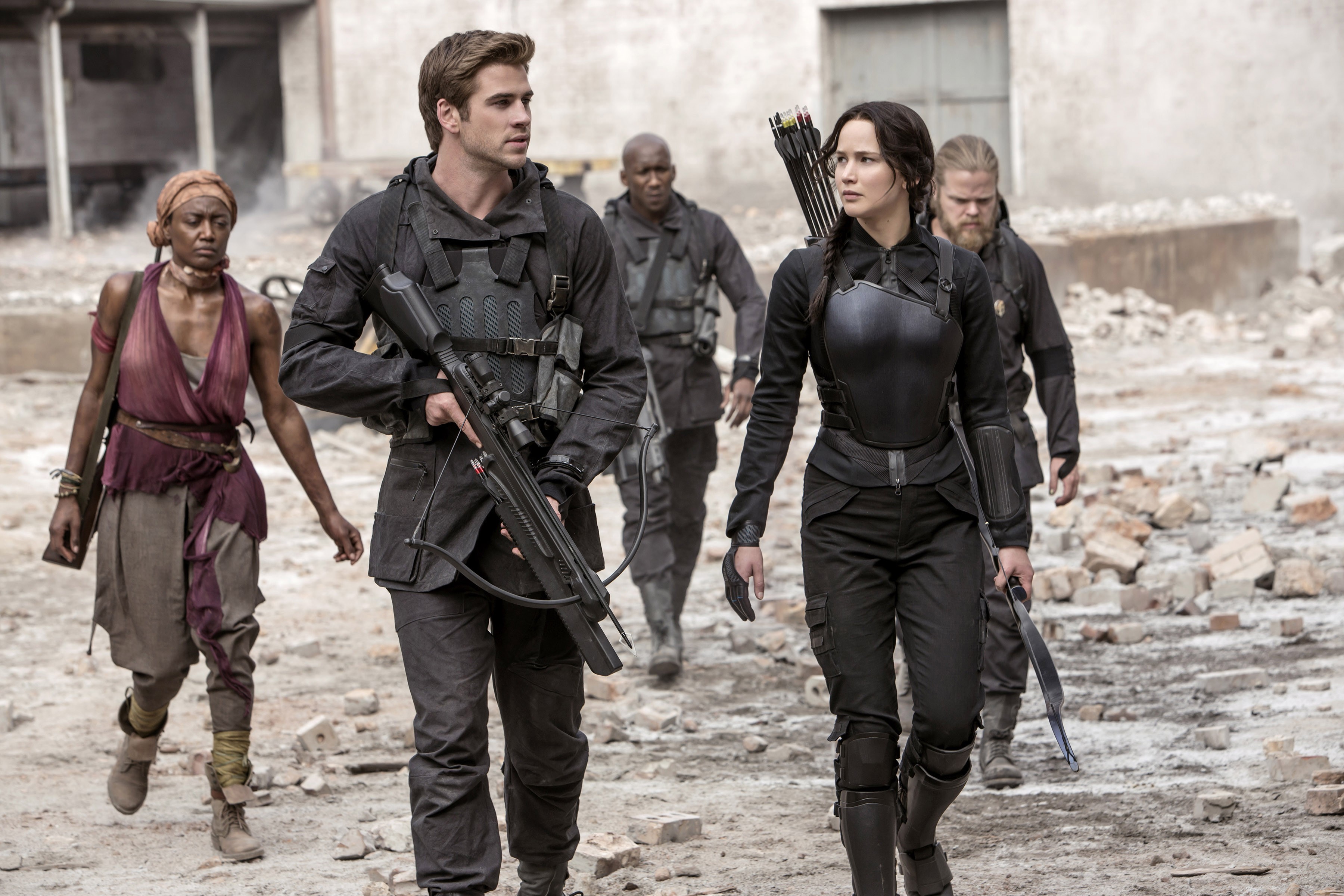 Luckily, Mockingjay — Part 1 powers through on the strength of a tale that’s always had more on the ball than the shoddy Games rip-offs (that’s you, Divergent). Katniss has been called to the underground District 13 to become the living embodiment of the Mockingjay, the bird that symbolizes revolt. Rebel leader Coin (Julianne Moore) doubts that Katniss has the cojones. But her wingman, Plutarch Heavensbee (Philip Seymour Hoffman), begs to differ. On the advice of the suddenly sober Haymitch (Woody Harrelson in full mischief mode), Katniss is deemed a disaster reading scripted lines for propaganda videos, or “propos.” Off she goes to real war zones with Cressida (a sly Natalie Dormer, from Game of Thrones), a videographer skilled at finding the inner Joan of Arc in Katniss.

Making Katniss a star isn’t much of a sweat, not with Lawrence in the role. At 24, she already ranks with the top talents of her generation. Beetee (Jeffrey Wright) builds Katniss three arrows for her bow: regular, incendiary and explosive. Lawrence can match that and raise the ante. She makes us feel every jab as Katniss reacts to Peeta’s alleged betrayal and her own fury at the Capitol’s terrorist tactics. “If we burn, you burn with us!” she shouts.

OK, there’s less action in Games this time, but what’s there is prime. And the acting is aces. Cheers to Elizabeth Banks for adding humor and heart to Effie Trinket, the fashionista chaperone now bereft of the wigs, makeup and accessories that make life bearable.

The Hunger Games has always attracted A-team actors. Moore is superb at suggesting the secrets buried in Coin as she plans a revolution beyond the reach of Katniss. And Hoffman, in a final performance to be completed in Mockingjay — Part 2, due next November, goes beyond the call of franchise duty to find the bruised soul in a master manipulator. “Anyone can be replaced,” his character announces at one point. Not this consummate actor. Seeing him go out with such playful panache is one of the unalloyed joys of Mockingjay — Part 1.