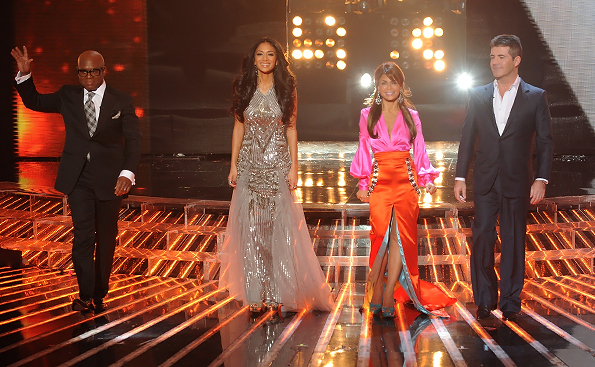 The inaugural season of The X Factor was a bumpy ride, with perpetual drama on and off the set, right on through to the end. At the helm were four well-known judges and a tall British drink of water named Steve Jones. Show mastermind Simon Cowell verbally jousted with producer L.A. Reid nonstop, while American Idol veteran Paula Abdul shared so many tears with former Pussycat Nicole Scherzinger as their heartbreaking decisions changed so many contesttants’ lives. Now that the season is finished, how do the judges feel about how it all played out? Rolling Stone caught up with them on the red carpet of last night’s finale to find out.

What gave Melanie the edge to win, aside from being on your team?
Well, that certainly doesn’t hurt, but Melanie is not a puppet. She thought really long and hard about how she was going to interpret the songs. We called her Eeyore, actually. When she was unhappy with a song, she was very, very grumpy. If she didn’t like something, though, there was a reason, and every week we were discovering something new about her.

On the whole, did the U.S. version of The X Factor go as you hoped it would?
I’ve got to be honest with you. If I would have known six months ago that we’d end up with someone like that – I mean, you pray for moments like this. So in terms of job done, we did it. Can we make the show better? Yes. I mean, I will never, ever go into anything going forward unless I believe I can make it better. I have to, otherwise I wouldn’t do it.

Is there anything different you would do for season 2?
Next year is going to be a bloodbath. Make no mistake. You’ve got everyone out there competing. You’re going to see elements of this in other shows. See, we’ve got to come out with something next year that’s better than all the rest. And that’s what we aim to do.

What is the secret of dressing really, really well all the time?
Not paying much attention to it. It really kind of more has to do with taste. Everything I buy kind of looks alike, so no matter what I put on, it looks the same.

Would [unstable X Factor contestant] Dexter Haygood get along really well with your former protégé, Bobby Brown, in another life?
Why do you say that? No, that’s not right. You sound like trouble.

What is your main takeaway from being a judge and mentee on The X Factor?
I feel like I grew as a person, putting all the energy and focus on another person to be the best they can be. And I’ve grown as an artist as well, and that’s always important to me – to be able to grow as a performer, to grow with my music.

How accurate was Simon’s impersonation of you on last week’s show?
I don’t think he was – I think he’s all jokes, because he was just speechless from my performance. I’d like to think that I have a lot more to say than just talking about rainbows. I have survived in this business, I am still surviving in this business, and that’s not just about talking about rainbows. I know what I’m talking about. I’m passionate about it, and I have the work behind me to prove it. I think he was just being Simon Cowell.

Have things settled down concerning your judgment on Rachel Crow?
I have a great relationship with Rachel and all the other contestants.

All your groups were dismissed early on. Could a group have possibly won this contest?
I really do think they have a chance. It’s really cyclical. You have to go back two decades to see groups hitting the pop charts. It’s time that groups get big again. Think of what groups have emerged on the pop charts – LMFAO, and there’s more success in the country charts with groups lately. I had an amazing time working with the groups.

How would [Paula’s “Opposites Attract” collaborator] MC Skat Kat have fared on the show?

He’d kill it. He’d be the one with the attitude. He’d have had a round with Astro, for sure. I miss MC Skat Kat.

Do you always ask the questions fed into your earpiece?
Sometimes I veto their comments. Sometimes I censor myself, too.

Were the judges ever mean to you backstage?
Mean to me? No. Poking me with a stick – “Aah, get back to your room”? No, they love me. They’re good people. And I look forward to working with them again.