It started with the title – a simple name, not Wolverine IV, or the X-man’s handle with an overblown subtitle attached to it, or even something akin to The Wolverine, which included a definite article lest you confuse him with other sharp-clawed mutant superheroes. Then came the first trailer, a stark preview set to Johnny Cash’s version of “Hurt.” There was no “in a world …” narration, no giant robots, no costumes; Patrick Stewart’s Charles Xavier briefly showed up, as did a mysterious man bandaged up like Claude Rains and someone who was clearly a bad guy, Otherwise, there were no other X-men in sight. Rather than a big city being used as a battleground, we got a desolate, abandoned power station that might have been down the road from Fury Road. Hugh Jackman had a full beard. You could tell this would be different. The whole thing felt funereal from the get-go.

How Superhero Movies Became Too Big To Fail

By now, you know that Logan, the final spin-off chapter in the Wolverine saga (or at least the last-Jackman-standing swan song for the actor with this character) has been proclaimed the single best superhero movie ever and possibly the greatest thing since admantium-sliced bread. Reviews have been raves for the most part, and the opening weekend box office was a whopping $88.3 million domestically and $240.8 million globally. It’s a blockbuster hit by any standard. You also probably know that it more than earns its R-rating and is not afraid to show you what happens when those claws get popped, in graphic and bloody detail. (That phrase “heads will roll”? It’s not just figurative here.) Wolverine is finally allowed to properly break bad. There’s also a young girl with a similar gift for zero-to-rage violence and gnarly, weaponized hands and feet. She breaks even worse.

And if you’ve seen the movie, you know that it very much represents the end – not just of the character’s journey from freak of nature to nurturer, but of a certain way of thinking about what superhero movies can be. The repeated refrain you’ll hear from critics is that Logan is a “real movie,” as opposed to a teaser for future installments, or a feature-length Easter egg for fans, or something primarily designed to move lunchboxes and stock prices. Oh, we’re still getting those – there’s another Guardians of the Galaxy and another new Spider-Man coming in the next few months, the latest Avengers adventure is filming as we speak, Fox is doubling down on Deadpool and D.C.’s troubled, grumpy cine-universe megillah is just getting started. But courtesy of director James Mangold, his cowriters Scott Frank and Michael Green, and a studio that took a leap of faith, we’ve witnessed what can be accomplished when you allow a superhero movie to go into bolder, more complicated, less comfortable and downright demographic-unfriendly territory. What you get is an evolutionary step forward for a genre that was in desperate need of one.

It’s been a long time coming, sometimes frustratingly so. For folks old enough to remember when Tim Burton’s Batman came out, the idea of doing a live-action superhero project that wasn’t all camp bams, blams and kapows – that, in fact, detoured into the darker-underbelly territory that comics themselves had just started exploring a few years prior – felt like uncharted waters. The movie’s runaway success ironically meant one small step for (bat)man, one giant leap backwards for the bigger picture; cue slowly diminishing returns, waves of inferior imitators and nipples on batsuits. Then came X-Men (2000), and a new way forward revealed itself. If Richard Donner’s Superman made you believe a man could fly, Bryan Singer’s mutant melodrama made you believe you could make a serious superhero movie set in a believably realistic world. Almost everything that followed – the first round of Spider-Man movies, Christopher Nolan’s doom-and-gloom Dark Knights of the soul, the rapidly multiplying MCU pop opera – built off that foundation.

What was an event-movie phenomenon started to become a bona fide genre, and you assumed this would morph into our modern version of the Western: moral fables in mass-entertainment drag, dressed up in capes instead of chaps. You also naively figured it would eventually follow the same trajectory, moving from Saturday matinee fodder to examining more complicated notions of right vs. wrong, social order, truth, justice and the contradictory American way. It’s not a coincidence that the film that looked like it would be the tipping point, The Dark Knight, is basically The Man Who Shot Liberty Valance; it’s a shame that it eventually feels like its being constricted by its own conventions and instead just codified the idea that somber is, like, so cool. (Dark is the new black!) This was the high point, and it still felt stuck in the middle in terms of the superhero movie’s potential to actually say something. And once the tentpole era kicked in, the bottom line dictated you stuck to the sure thing. You can tweak it to look like a WWII romp, a conspiracy thriller, a space adventure, a workplace comedy, a psychedelic trip. Just don’t mess with the recipe. 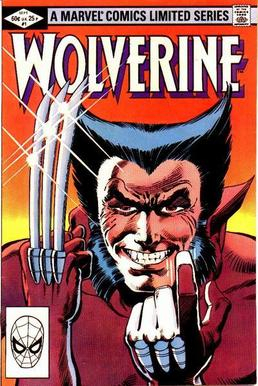 And let’s be honest: Wolverine did not seem like the one to push things in a new direction. Introduced initially as a foil for the Hulk in the comics, he joined the mutant superhero gang shortly after a team reboot and quickly established himself as the resident hairy-forearmed X-badass. The most iconic image of him still remains the cover of the 1982 four-issue miniseries written by Chris Claremont and drawn by Frank Miller (who’d battle-scar Batman a few years later), presenting a smiling scrapper with what looked like three katana swords sticking out of a fist and a come-at-me-bro vibe. Jackman played him with a combo of self-awareness and brooding tough-guy chic, giving the wandering warrior a lot of soul and little variation. He’s a fairly conservative screen character: Glare, go berserk, feel guilty, rinse, repeat. Even fans began to feel fatigue, especially once the field became crowded with superhero antiheroes. Mangold had another idea, however. What if you fucked with the whole template? What if you finally gave the superhero movie its Wild Bunch, its Unforgiven?

So, borrowing heavily from Mark Millar and Steve McNiven’s eight-issue alt-storyline “Old Man Logan” in Wolverine’s solo books (read an excellent breakdown of it here), Logan‘s creative team went full HAM. It’s 2029, something has wiped all those mutants you know and loved out, and Jackman’s killing machine is working as a chauffeur. His healing power is practically on the fritz, and he can barely retract his signature slice-and-dice appendages. He’s old, and dying; so, for that matter, is his decrepit mentor Charles, now prone to dementia and uncontrollable psychic outbursts. One day on a job, the man formerly known as the Wolverine is recognized by a woman who has a favor to ask. Take care of a young, fugitive Mexican girl named Laura (Dafne Keen), she pleads. She’s like you. Enter a private army, working on behalf of someone who also wants the kid.

What follows is the sort of untamed, unhinged mayhem usually associated with Asia Extreme movies, Hong Kong action films, fraternity hazing weeks and UFC bouts, as claws meet flesh and Caro syrup manufacturers work overtime. The trio hits the road and looks for sanctuary, specifically a Canadian Eden for next-gen mutants that Laura knows from … an X-Men comic book. (“That wasn’t how it happened at all,” Logan says about those literary adventures. When the legend becomes fact ….) And though superhero-movie tropes are certainly present and accounted for – there will be gravity-defying leaps, and pyrotechnics, and clones – there’s a palpable sense of mortality and mournfulness in Logan that feels leagues above your average steroidal heroes v. villains showdown. “I hurt people, too,” Laura admits, talking to the one person who understands the genetically engineered killer inside her. “Bad people.” “All the same …,” Logan replies, letting the reply hang. Deserve’s got nothing to do with it. It’s still killing, and you have still have to deal with having dealt the hand.

Other superhero films have eggshell-pecked around the toll of costumed do-goodery and the collateral damage done (see Civil War), and as Deadpool proved, you can break the PG-13 ceiling and still rake in box office returns. But the former still feels like a better-than-most advertisement for non-stop Make Mine Marvelmania: The Movie (TM), and no one could accuse the latter of being mature just because there’s more blood and “fucks” in it than usual. Logan is unique. Its violence may be cathartic but the carnage emphasizes the cost. Its set pieces are thrilling but are followed by conversations suffused with regret, sorrow and a rage against the dying of the light. We’re watching characters we’ve invested in weep and wallow in despair. Even without the copious Shane references here, the movie suggests a a ride into the sunset, one last stab at a noble gesture before all that literal stabbing gets karmic.

This is not what superhero movies do. They squander their potential for depth in the name of self-perpetration and tune-in-next-financial-quarter serial storytelling and sucking the oxygen out of the multiplex. Logan kills that idea as the end-all be-all. Temporarily, of course – like its hero way back in his prime, these too-big-to-fail films will heal and rise again and take over the world. But with this last-gasp X-entry’s success and its embrace from audiences ready for something new, we know have a plausible alternative universe, one in which the genre’s potential to tap into chewier, heavier narratives has a proven track record and can perpetuate equally substantial stories within the framework. It needed to show people that it can be, among many other things, something that didn’t just reflect back our need for escapism. We may be, at long last, entering the superhero movie’s Homo superior phase.