Why 'The Beach' Is a Lost Leonardo DiCaprio Classic - Rolling Stone
×
×

Every few months, RollingStone.com shines a spotlight on a forgotten, neglected, overshadowed, underappreciated and/or critically maligned film that we love in a series called “Be Kind, Rewind.”  In honor of The Revenant and Leonardo DiCaprio’s widely predicted Oscar win, we’re focusing on an older Leo movie that’s been unfairly put in the “noble failure” pile: The Beach.

It’s February 2000, a little over two years since Titanic plowed directly into the zeitgeist, and the film’s 25-year-old star is now slightly more famous than the ship of dreams itself. No actor on the planet is more difficult to extricate from the aura of his public image; no other actor brings more baggage to a new part.

Other than a fitting cameo in Woody Allen’s Celebrity, Danny Boyle’s The Beach is the first movie that Leonardo DiCaprio has shot since becoming the King of the World. His most loyal subjects expected another A-list victory lap full of sound, fury and CGI set pieces. Instead, Hollywood’s hottest heartthrob followed up his role in the biggest blockbuster since Gone With the Wind by playing a generic American backpack brat who buys a one-way trip to Thailand in search of “something more beautiful, something more exciting, and something more dangerous.” Cue mass Leo-phile confusion.

Unsurprisingly, people don’t love The Beach. It stands at 19% on Rotten Tomatoes (for context, that’s 27 percentage points lower than Ted 2). It underwhelmed at the domestic box office. It didn’t satisfy a legion of confused fans who were sold an edgy update of Blue Lagoon, only to find something that more closely resembled a watered down and warless remake of Apocalypse Now. In the end, the film’s $50 million domestic haul barely doubled DiCaprio’s salary.

But hindsight can reveal all sorts of hidden wonders. Whatever part he decided to play after Jack Dawson, DiCaprio knew that viewers weren’t going to be able to disentangle the character from the actor behind him, and he was perceptive enough to pretend otherwise. Boyle has spoken openly about how consciously he and his leading man manipulated the latter’s stardom to their advantage. “I talked to Leo about this,” he told Time Magazine in an interview published shortly after the movie’s release. “And he felt his options prior to making the movie were either to confirm his standing from Titanic, dynamite it with American Psycho, or to use what he had and take the audience with him. The latter was, to both our minds, more interesting.”

In other words, DiCaprio would essentially be playing himself.

“My name is Richard, so what else do you need to know?” In any other movie, that opening line of voiceover would sound like a sub-Tarantino provocation, but DiCaprio’s stardom completely transforms it. It’s as if he’s declaring: “I’m the kid from Titanic, you know I’m the kid from Titanic, so let’s just accept that and move forward.” It’s the first self-reflexive salvo in a film that takes pains to make sure that you never forget who you’re watching. The Beach wants you to see Richard through the lens of the superstar playing him, and vice-versa. The King of the World was casting off his crown.

Shortly after Richard blows into Bangkok, he’s visited by a raving lunatic named Daffy (Robert Carlyle), who rambles about looking for “the cure for the cure” and tells the wide-eyed kid about a secret off-shore utopia. When the man kills himself and bequeaths Richard a hand-drawn map to the island’s location, our hero’s proto-millennial spirit quest is gifted with the perfect destination. And so, with his nubile French neighbor (Virginie Ledoyen as Françoise) and her hapless boyfriend (Guillaume Canet) in tow, he charts a course for heaven on earth.

For its first hour, the film is as intoxicating for us as the idyllic island hideaway is for Richard and his pals. Boyle shoots their journey there in a way that crystallizes their perfect moments of happiness — when the kid lies on his back and watches Françoise sally across his view of the night sky, her image blurs across the screen as though it’s melting directly into Richard’s memory. Moby’s “Porcelain,” ubiquitous at the time, was made to be draped over a casual montage of the beach’s residents hanging out, the song’s drifting notes making it sound as though it could go on forever. But Richard has hardly set foot on his new island home before the sand begins to shift beneath his feet, and his desire for Françoise settles into the sky above like a permanent storm cloud. 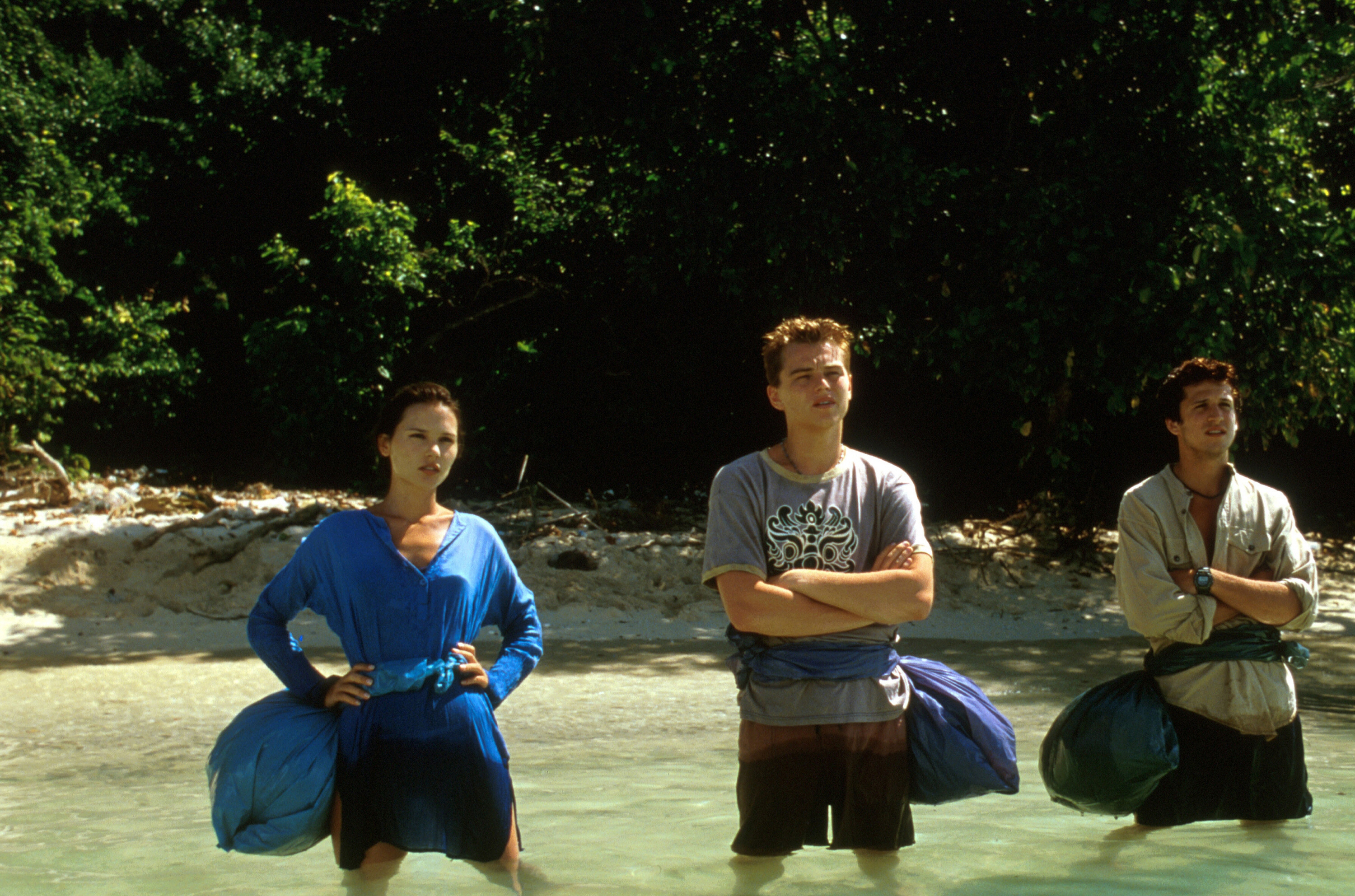 Happiness, as Don Draper once said, is just a moment before you want more happiness. Richard is reluctant to accept that sentiment, but Sal (Tilda Swinton), the community’s despotic leader, has already rejected it outright. For Sal, happiness is a place on a map, and any threat to its perfect equilibrium must be terminated extreme prejudice. When one of the island’s Swedish residents is bitten by a shark, it’s Sal who shuts down any talk of sending him to the mainland for medical attention. Later, when his leg begins to rot, she insists that he be dragged out of sight so that the party can rage on. She’s trapped on the beach, like Mal in the decrepit bottom dream level of Inception, but this earlier DiCaprio film does a more lucid job of illustrating the danger of not abandoning a fantasy long after it’s started to crumble around you.

It’s only a matter of time before Richard succumbs to the same mania, Boyle’s characteristically maximalist approach applying the skills he honed on Trainspotting and rendering utopia as its own deadly addiction. “In the perfect beach resort,” Richard reflects, “nothing is allowed to interrupt the pursuit of pleasure, not even dying.”

Chronicled in a notoriously insane third act, his downward spiral from uninvited tourist to sociopathic jungle creature happens slowly and then all at once. Confronted by the grim reality of paradise, Richard tries to burrow even deeper down into fantasy, disassociating himself so completely that he begins to picture his life as a videogame. It’s not until he indirectly causes the deaths of the kids that he was trying to scare off that Richard realizes that he’s suddenly been recast as Colonel Kurtz.

As is often the case for Americans who travel abroad, some innocent strangers had to die so that Richard could learn a crucial life lesson for himself: The moment you start to love something is the moment you start to lose it, and if you don’t adjust for that, it’s only a matter of time before you lose yourself. In the wake of Titanic, it would have been so easy for DiCaprio to coast for the rest of his career, but watching The Beach, you can understand why he didn’t anchor himself to the Star Wars prequels — why he partnered with Martin Scorsese and Steven Spielberg instead. Watching this nirvana-as-a-form-of-madness parable, you can understand how nomadic cherub Jack Dawson is about to win an Oscar for a nearly wordless performance in which he sleeps inside the guts of a dead horse. Titanic made Leonardo DiCaprio a sensation. The Beach that proved he was a movie star.