Over the last few decades – thanks in part to movies and TV shows like Dazed and Confused, Boogie Nights, Anchorman and HBO’s Vinyl – there’s been a pronounced pop cultural tendency to reduce the 1970s to little more than a fabulous parade of campy signifiers like mirrored disco balls, brightly-painted muscle cars, platform shoes, bellbottomed jeans, tube tops, Afro hairdos, pornstaches and piles of cocaine.

It’s an understandable impulse, of course. (Who doesn’t love Afros or piles of cocaine?) But taking such a superficial approach to the seventies means glossing over the grittier, grimier and more soulful aspects of a decade that was marked as much by socio-economic upheaval and spiritual dislocation as it was by debauchery and decadence. There’s a scene early on in Slap Shot – George Roy Hill’s brilliant hockey comedy, released 40 years ago on February 25th, 1977 – that may be one of the most quintessentially “seventies” things ever committed to celluloid, even though there’s nary a groovy shag carpet or white three-piece suit anywhere in sight. Minor league hockey players Reggie Dunlop (Paul Newman) and Ned Braden (Michael Ontkean) walk along a dreary street in front of the local steel mill, arguing about what the factory’s just-announced shutdown is going to mean for their team and their town.

A Look Behind Hockey's Iron Curtain

“What are these poor fuckers going to do when they close the mill?” wonders Braden. “10,000 mill workers will be placed on waivers. Every sucker for himself, I guess.” Ned’s wife Lily (Lindsay Crouse) then brings the conversation to a halt by drunkenly roaring up in a dingy 1971 Ford Econoline van. Fleetwood Mac’s “Rhiannon” is blasting from the radio, and she fixes her husband with a glare as toxic as the fumes rising from the mill’s smoke stacks. “Will you ever win?” Stevie Nicks asks, and there were quite a few blue-collar workers during the Nixon/Ford/Carter years who were asking themselves the same question.

Four decades ago, Slap Shot didn’t fare particularly well with the moviegoers or critics of the day, many of whom took issue with the film’s violence and raunchy humor — the very things, of course, that would make the film a belated cult hit with viewers who soon discover it on VHS and cable. Nowadays, it’s rightly considered a sports-movie classic, and it’s hard to find a self-respecting hockey fan who can’t rattle off a few choice lines from the Hanson Brothers — the child-like goons played by professional hockey players David Hanson, Jeff Carlson and Steve Carlson — at the slightest provocation. But there’s far more to this near-perfect puck opera than bloody brawls or sidesplitting antics. No other sports film of the 1970s so brilliantly captures the downbeat look and feel of its era, while also realistically rendering the lives of its subjects, both on the field (or ice, in this case) and off.

Much of its innate authenticity is due to an excellent script by Nancy Dowd, who based the story (and its eyebrow-singeing dialogue) on her brother Ned’s brief career as a minor league hockey player. Her sibling, who makes a brief appearance in the film as the dreaded enforcer Ogie Ogilthorpe, played for the Johnstown Jets of the North American Hockey League; at his sister’s behest, he often set up a tape recorder in the Jets’ locker room and on team bus rides, in order to capture the hilarious off-color repartee of his teammates. While Slap Shot‘s violence is certainly reminiscent of the brutal brand of play that characterized the NHL during the mid-1970s – as epitomized by the ruthless Philadelphia Flyers, a.k.a. the “Broad Street Bullies” – all of the film’s fight scenes, even the one where the Hansons charge into the crowd in search of a guy who hit one of them with a set of keys, were based on actual incidents involving the Jets.

But Dowd’s script also accurately depicts the crushing tedium of life in the minors. Slap Shot’s Charlestown Chiefs spend most of their downtime in seedy dives, diners and motel rooms, watching game shows or soap operas while drinking away their boredom and dreaming of better things. (In the words of Brad Sullivan’s delightfully sleazy Morris Wanchuk, “Here’s to all that gorgeous snatch in F-L-A!”) The Chiefs’ wives have it even worse; at least their husbands get to work out their frustrations on the ice. As Shirley Upton (Swoosie Kurtz) puts it, “I only drink in the afternoon. Or before a game. Or when Johnny’s away.”

While some of Slap Shot‘s characters are undeniably cartoonish, others clearly reflect how Americans were grappling issues of personal identity and self-fulfillment in the wake of the sexual revolution, the feminist movement and the psychedelic awakening of the 1960s. A decade earlier, a woman like Lily Braden probably wouldn’t have given a second thought to following her husband from Princeton University to a small working-class city like the fictional Charlestown, Pennsylvania. But with the U.S. divorce rate spiking hard at that point, she would have certainly given serious thought to leaving her husband rather than endure another stifling season as a hockey wife. And then there’s Chiefs player Dave “Killer” Carlson (Jerry Houser), who’s completely down with Dunlop’s new strategy of provoking fights, yet also finds inspiration and peace in the “positive-thinking” records of Swami Baha – a riff on the self-actualization cults like EST and the Source Family that were massively popular during the 1970s.

Dowd’s script alone would have made for a compelling movie, but it’s George Roy Hill’s direction that really puts Slap Shot over the top. Hill had previously worked with Newman on 1969’s Butch Cassidy and the Sundance Kid and 1973’s The Sting (which netted him an Oscar for Best Director); he had a decided flair for telling stories about outsiders, and for getting the most out of sharply-written dialogue. But he was also a stickler for realism, even in a sports comedy, and did much of the shooting in Johnstown, Pennsylvania, where Ned Dowd had played for the Jets. Hill makes the most of Johnstown’s stark industrial landscape, as well as its depressed downtown – where the lone movie theater is showing Deep Throat – and its cheerless Cambria County War Memorial Arena, where much of the hockey action takes place. It’s utterly believable that local fans would come to Chiefs games less for the hockey than to blow off steam, or that they’d become galvanized by Dunlop’s decision to refashion the team as a stick-swinging goon squad; likewise, it makes perfect sense that the Chiefs would be revitalized by their followers’ newfound enthusiasm. 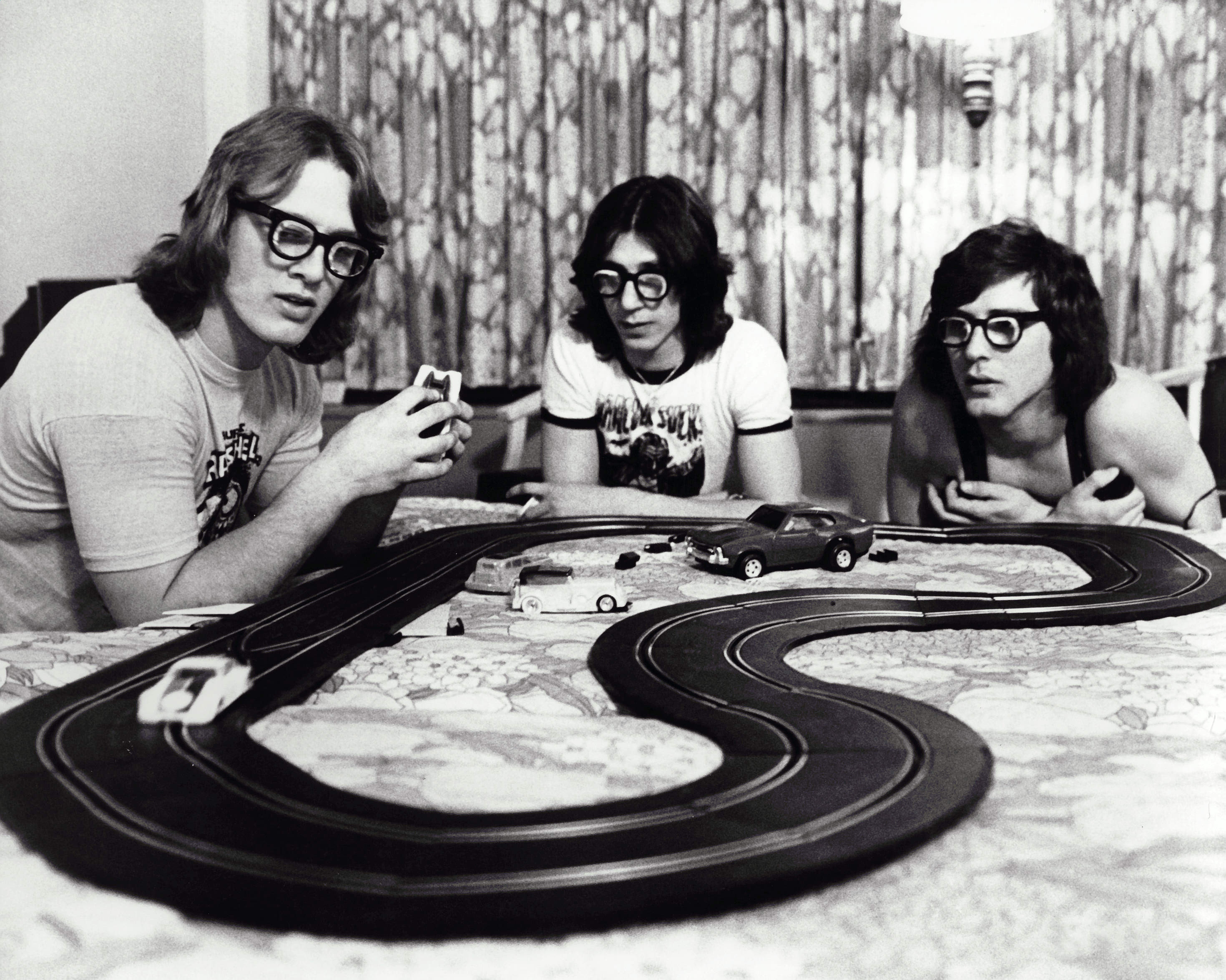 In casting the players, Hill insisted on using actors who could actually skate. Al Pacino was originally up for the role of Reggie Dunlop, but was offended that the director seemed more concerned with his agility on the ice than his acting chops. Nick Nolte, Harrison Ford, John Travolta, Tommy Lee Jones, Kurt Russell and Richard Gere also auditioned for various parts in the film; none of them skated well enough to qualify. Ontkean, who had been a star Right Wing at the University of New Hampshire, was perfect for the role of the former college star who wants to play clean, “old time hockey,” but Hill also upped the verisimilitude factor by hiring actual hockey players – guys who could not only skate and handle a stick, but could also be shown removing their dentures before hitting the rink. The Hanson characters were actually based on brothers Jeff and Steve Carlson (their third brother, Jack, opted out of filming because his team was in the playoffs at the time, and had to be replaced by Jets player Dave Hanson). Opposing goons Clarence “Screaming Buffalo” Swamptown and Ross “Mad Dog” Madison were respectively portrayed by Joe Nolan and Connie “Mad Dog” Madigan, professional players whose real-life reputations were as fearsome as those of their characters.

During the last decades of his life, Paul Newman repeatedly name-checked Dunlop as one of his favorite roles, and it’s easy to understand why. Though not especially talented as a player or a coach, our foul-mouthed hero managed to hang on thanks to a combination of looks, charm and guile, and he has to utilize every bit of those attributes if he’s going to achieve his aims. In short, he’s got to keep the Chiefs from folding, keep his team’s winning streak alive and keep his ex-wife from leaving town. The team may be little more than a tax write-off for its ownership, but hockey is Dunlop’s life. Despite his protestations that he’s “got nothing to worry about,” he knows deep down that he’s aging and running out of options.

Newman digs into Dunlop’s profane dialogue like a hungry man devouring a steak, but the appeal of his performance goes well beyond, “Damn, Paul Newman is talking shit!” The moment where Coach first realizes that the fans have been fired up by the Hansons’ goonery is a thing of subtle beauty, communicated solely via a goofy grin and the crazed gleam in his baby-blue eyes. It’s one thing to play the guy as an go-get-’em Knute Rockne type or a grizzled misanthrope, but the movie star plays him as a mediocre leader; only the Hansons are dim enough to be pumped up by his boilerplate pep talks. For all of his “clever” attempts at manipulating the team, its owner and the local media, the only person who’s totally fooled by Dunlop is Dunlop himself.

Rowdy, raunchy, hilarious, absurd, deeply depressing and profoundly human – often all at the same time – Slap Shot is refreshingly devoid of phony uplift or showy monologues. There’s no jerking of tears or pulling of heartstrings, no big lessons to be learned beyond the harsh reminder that sports is a business; the passion of its fans and the heroics of its players are ultimately less important than the clang of the cash register. It’s the rare combination of both team-spirit uplift and period-appropriate downer. Even hailing from a decade with no shortage of competition (The Bad News Bears, Rocky, Brian’s Song, North Dallas Forty, Bang the Drum Slowly, etc.), Slap Shot remains the greatest sports flick of the 1970s – and we’ll gladly “put on the foil” and duke it out with anyone who says otherwise.