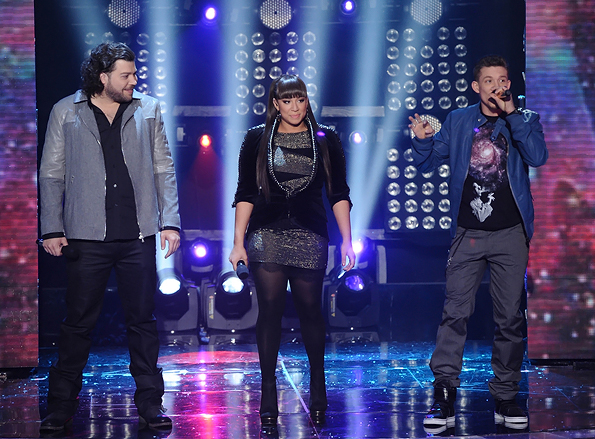 Simon Cowell and his cohorts began scouring the country six months ago, on a quest to find musicians imbued with that certain je ne sais quois he and his fellow judges dubbed The X Factor. Thousands and thousands of eager singers heeded the call, showing up to auditions in record numbers all over the country. Although those teeming masses of contestants were initially whittled down to a comparatively lean 164, there were only three remaining at the start of last night’s finale. Now there’s just Melanie Amaro, the winner of the show, chosen by America. While it’s clear how the show concluded, Rolling Stone still had some lingering questions for the final three.

You seem really at peace with the outcome.
Second place is not a bad place to be. My goal in my career is not $5 million. My goal is to make fantastic records, and perhaps win a Grammy. I’m really happy for Melanie. She’s a good kid.

So you’re not going to start watching American Idol out of spite?
No. I never would have done Idol. It didn’t feel right. Something about The X Factor made sense, and I think it’s simply fate.

Are there any songs you didn’t sing that you wish you would have?
Yeah, I wish I would have sang some more soul classics – some Marvin Gaye, some Otis [Redding], some Sam Cooke. Those are really fun to sing, and I wanted to kind of do more of that.

Are there any songs you did sing that wish you wouldn’t have?
The ensemble performances. If I could’ve never done those, I’d have been happy. It was my own head that made them bad, though. They ended up, in a way, being fun – in hindsight. There’s nothing I regret doing on this show.

You had a lot of different hairstyles on the show. Did you pick up any secrets?
Absolutely. Ken Paves and Pierce Austin were my guys. Ken said – and I didn’t know this – he said, “Don’t condition all the way through. Just condition the ends.” Because then it gets all oily on the scalp. A side of vinegar on the scalp is good. Unbelievable. I didn’t know squat about hair. I didn’t know this stuff. Believe it or not, they’ve cut more than seven or eight inches off my hair over the course of the show.

How are you going to celebrate being done with this show?
I’m going to eat a lot of food with my family.

Is there anyone you’d have rather done your duet with on Wednesday?
Other than Avril Lavigne? Nope.

Last time we spoke, you mentioned you might want to be slapped around by Nicole Scherzinger. Have you asked her out yet?
(Smiles and holds a finger up to his lips)

Do you have any advice for contestants trying out next year?
Believe in yourself, do not give up, and when you get a “no,” continue to fight, because I got “no”s. Trust me, I got “no”s. But I just have to believe in myself and move forward, and it will be okay.

After your duet with R. Kelly, did he say anything that we should know about?
He told me to just continue to do what I love, which is the best advice anyone can get. Just continue to follow your dream.

Do you feel vindicated now for when Simon dismissed you early on?
I felt as though I was given an equal opportunity the same as anyone else. I feel as though he made a mistake, and he made up for it, and he came back and got me, and I am so, so happy and so thrilled to be able to have that second chance.

You are 19 years old. If I were to ask you to say, “I’m going to Disneyland,” would you have any idea what I was talking about?
No. What do you mean?

Are there any favorite songs you didn’t get a chance to sing on the show?
There were a few, but I’ll probably just get them on the album or something.