Dominion isn’t your average supernatural TV drama. Based on characters from the 2010 film Legion, the series is set in a post-apocalyptic future, 25 years after archangel Gabriel and his winged army began an epic war against mankind. The Syfy show premieres on Thursday, June 19th, but in the meantime, curious viewers can whet their appetite with this exclusive teaser clip from the pilot episode, which features young soldier Alex Lannen (Christopher Egan, Kings) engaged in a thrilling showdown with a bloodthirsty angel.

The scene is set in Vega (formerly Las Vegas), a politically torn, fortified city which serves to protect humans from their angel enemies. Inside a dusty, deserted-looking building, Lannen is in stealth mode, approaching a group of mutant-looking, poker-playing creeps.

After blowing his cover by stepping on a glass bottle, one terrifying angel asks him to join their table. “We have an empty seat,” she cracks, before Lannen fires off a shot at the table. This begins a heart-pounding chase scene, as Lannen battles with an angel that straddles his car. After running into trouble at a protective gate, he manages to shoot the angel, who then bursts into flames. 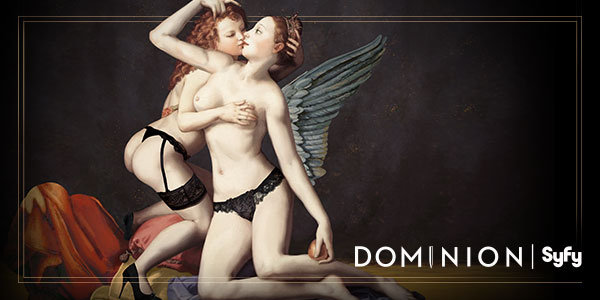 Be sure to catch the premiere episode, which airs Thursday, June 19th at 9 p.m. EST on Syfy.