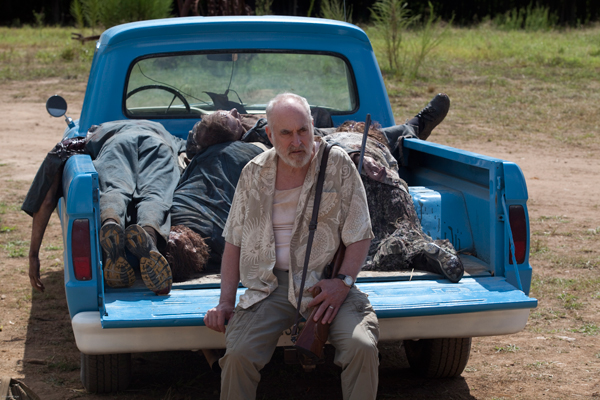 Okay, zombie-lovers! Walking Dead is back, for what really ought to be a jam-packed second half of the second season, since the first half was just a never-ending quest for a little girl who turned out to be right under their noses all along, albeit a rotting, putrefied zombie little girl whom you’d think they would have smelled.

Where we left off: Shane went off the rails and smashed open Zombie Barn so that he and the other Still Alives could dispatch the zombies Hershel was keeping on his property in the hopes that someday they would be cured. Sheriff Rick shot Zombie Sophia and everyone was sad.

Where we pick up: Carol storms off, distraught over the discovery that her little girl became undead and then became dead-dead. Hershel’s blonde daughter Beth weeps as she runs to the corpse of her zombified mother, except Dead Mom is not quite dead-dead and snarls and tries to attack. T-dog stomps on the Zombie Mom’s head until Smugface Andrea takes her out with an axe to the brain.

Shane is furious that Hershel knew that Sophia was in the barn the whole time and still let the Still Alives spend day after day searching the woods for her. Hershel insists they had no idea who was in Zombie Barn other than their family members, because Otis was the one on zombie-patrol who put the other walkers in there. Hershel demands that Shane gets off his land. Sheriff Rick is also pissed at Shane because Shane undermined his authori-tay by staging an insurrection and handing out weapons to kill all the already-dead members of Hershel’s family.

The Still Alives want to have a funeral to honor the dead – they’ll bury the ones they loved and burn the other bodies. Sounds fair. Lori asks Carol to come to the funeral but Carol insists that the little female zombie was not her daughter anymore. Sophia died when she was bitten somewhere in the woods and turned into a walker. So there’s no need for Carol to honor her second death. She goes out into the woods and destroys a Cherokee Rose – fuck you, Cherokee Rose! Fuck you for giving Carol hope! And take that, weeds! Damn all this flora. Damn it all to hell.

Inside the farmhouse, Hershel folds and puts away his dead wife’s belongings. It looks like he’s hit “Acceptance” on the ol’ Kubler-Ross scale, and nothing helps that stage like taking out one’s old flask.

Out in the field (I fought for my meals), T-dog and Andrea load the unloved zombies onto the back of a pickup truck. Andrea hops on the truck as Shane drives the bodies to wherever they’ve decided to build a funeral pyre. A zombie arm falls off and makes disgusting squishy noises when Andrea fetches it.  Squish, squish.

As young lovebirds Maggie and Glenn discuss the funeral, Blondie Beth collapses. The Still Alives look for Hershel to take care of her, since he is so well trained in taking care of horses and other livestock. Shane notices Hershel’s flask and comments that it looks like Hershel found an old friend. Maggie insists that Hershel quit drinking the day she was born and even forbids any booze from being in the house. (Sounds like a really fun house.) But she notes that there’s a bar in town and that’s where Hershel used to spend his days back when he was a boozin’ horse doctor. Sheriff Rick and Glenn announce that they’ll go find him and bring him back.

Lori doesn’t want Rick to risk his life going into town. After all, Carl the Kid really needs a fatherly influence, seeing as he just told Lori that he would have shot Zombie Sophia himself if he had to. That kid is getting cold, Lori worries. And somehow, the extremely loving and affectionate Rick needs to stick around to make sure he stays warm. But Rick insists they need to get Hershel – for the baby. Even though the baby won’t be born for months and months – but maybe Hershel was known for going on 7-month benders back in the day. We just don’t know.

Shane washes his shaved head at the water pump and looks up when he hears a noise in the woods. Is it a zombie? Oh, please, let it be a zombie. I mostly watch this show to see zombies. But no. It’s just Carol. Hey, Carol! Hey hey hey! Shane washes her arms and says he is real sorry about Sophia. Everyone is sorry about Sophia. So sorry, in fact, that Dale tells Lori that this place is going to hell. (Note: going?  I am pretty sure it went to hell when the zombpocalypse hit). Dale reveals that he thinks Shane is a dangerous hothead and he is pretty sure that Shane shot Otis and used him for zombie-bait. How astute, Dale! Uncle Dale worries that if Shane could sacrifice Otis like that, he’s probably going to shoot someone else. Who needs the zombies if the humans can all kill each other?

On the way to town, Glenn and Sheriff Rick have some bro-time. Glenn confesses that Maggie said she loved him and he didn’t respond in kind. Rick tells him that Maggie really does love him, even if he’s basically the only age-appropriate man left on the planet and she doesn’t really have any other options. Rick says that love is something they don’t get enough of these days and that Glenn should tell her that he loves her. Glenn takes this in. Then he tells Rick that he knows that Lori is preggers. This is some serious man-talk time, and it’s so fitting that they’re heading to a bar so they can continue to bond over some brewskies.

And lo and behold, there is Hershel, sitting at the bar and pounding them back. Rick tells him to stop drinking because Beth is sick and she needs her dad, who happens to have a modicum of medical training. Hershel shrugs it off and says that what Beth really needs is to mourn her mother. In fact, all of them ought to be mourning and Hershel is feeling really bummed out that he was the one holding out hope for a cure. Hershel thought that a major sign was the fact that he miraculously cured Carl the Kid, but now he realizes that miracle was only a sham and that there is no magical cure to turn the zombies back into humans. Hershel is drowning in self-pity and whiskey. He insists that his family deserves better than him.

At the farm, Beth is burning up. Lori sticks Carl with Andrea and asks Daryl to go find Hershel – which seems a little redundant since Rick and Glenn are already on that mission, but, hey. Daryl snaps that he took an arrow and a bullet while looking for Sophia and he is just d-o-n-e with helping people. Lori sighs, loads a gun, and gets into a car, because surely she can hasten the bring-Hershel-back campaign. While she’s driving, she looks at a map and gets distracted and smashes into a zombie. Then her car flips over and she has a tremendous accident and I really hope she stays alive until a zombie eats her because dying in a car wreck during a zombpocalypse seems rather anticlimactic.

In the bar, Hershel is spiraling deeper and deeper into depression as he wails about the fact that there is absolutely no hope for humankind. No hope! No future! Humanity is doomed! Except – who’s that at the door? Why, it’s two new dudes! Two city-slicker dudes named Tony and Dave who’ve arrived all the way from Philadelphia! All the men bro-down and start drinking while Dave explains that he tried to get to DC but all the roads were jammed, and that they’ve heard rumors that there are refugee camps in Nebraska. He also notes that Fort Benning is overrun with lamebrains, so the Still Alives should probably make alternate travel plans.

Dave wants to know if this area is safe, and Rick tells him that they’ve killed some walkers. Dave likes the word “walkers” because it is more succinct than “lamebrains.” You say tomato, I say tomahto. Tony pees in the corner. Dave asks if they have food and water and cooze (ew: cooze) because he hasn’t had a piece of ass in weeks. (Join the club, Dave!) He wants to join the Still Alives and Hershel’s family on the farm. Dave suggests they pool their resources, but Rick shuts him down. That is not an option, Dave. You cannot join the gang at the farmhouse because it is already too crowded and also you used the word “cooze.”

Dave insists that they all need to get to know each other, but Rick is adamant that he cannot join their gang. Rick suggests they should keep looking, and he hears Nebraska is real nice this time of year. Then Sheriff Rick shoots Dave and Tony, blam blam blam, and now they are dead. We met two new people! But now they are ex-people! Although, admittedly, they are ex-people who peed in corners and used the word “cooze,” but maybe we should have learned more about them before the cop shot them? Zombies are no longer the biggest threat, it appears.

Back at the farmhouse, the unloved zombies’ bodies go up in a blaze. It seems stupid to light a giant fire which will indubitably attract more zombies, but at this point I hope the walkers come soon because this show needs some walking dead, stat.

Humans: Tony and Dave, we barely knew you.

Zombies: One walker was smashed by a car but might not be dead-dead yet.