Big-screen names are so prominent on Broadway this season that the Tony Awards could afford to snub some of Hollywood’s brightest lights. There was no room for Robin Williams (Bengal Tiger at the Baghdad Zoo), Daniel Radcliffe (How To Succeed in Business Without Really Trying), Ben Stiller (The House of Blue Leaves), Kiefer Sutherland (That Championship Season), Kathleen Turner (High) and Chris Rock (The Motherfucker With the Hat). Maybe hardened stage vets and Tony voters resent all that recent Tony love given to Denzel Washington (Fences), Catherine Zeta-Jones (A Little Night Music) and Scarlett Johanssen (A View From the Bridge).

And don’t look for Spider-man. Despite being in previews for over six months, the troubled musical with a score by Bono and the Edge doesn’t officially open until June 14th, which puts it out of the running this year. No sweat. There will be plenty of Hollywood on view this Sunday on CBS when the Tony trophies are passed out.

Hollywood Scorecard: Two of the nominees are based on movies — Catch Me If You Can starred Leonardo DiCaprio and Tom Hanks, and Sister Act featured Whoopi Goldberg. The Scottsboro Boys, a musical about nine black teens accused of the rape of two white girls in Alabama in 1931, is an original, but it’s already closed. That leaves a clear winner.

Will Win: The Book of Mormon, which is simply the best show on Broadway. Period. This hilarious yet heartfelt take on Mormon missionaries in Africa is the brainchild of Trey Parker and Matt Stone, the creators of TV’s South Park and the best Hollywood musical in decades in 1999’s South Park: Bigger, Longer & Uncut.

Should Win: The Book of Mormon. Sometimes it’s just no contest.

‘The Book of Mormon’: The Genii of ‘South Park’ Hit Broadway, and History is Made

Hollywood Scorecard: Steven Spielberg has already filmed War Horse, about a British boy whose beloved steed is sold to the cavalry and forced to fight in World War I, so expect Oscar nominations when the film is released on Dec. 28th. Oscar winner Frances McDormand (Fargo) stars in Good People, about class conflict in South Boston. Jerusalem, a British play, toplines Mark Rylance, who you may have forgotten in such films as Angels & Insects and The Other Boleyn Girl, but can never forget once you see him on stage. And The Motherfucker with the Hat, a fierce comedy of addiction, has Chris Rock to draw you in and a powerhouse drama by Stephen Adly Gurgis to keep you riveted.

Will Win: War Horse. Despite a simplistic plot, the spell cast by the Handspring Puppet Company who bring the horses to vivid life really is indelible. Spielberg, working with real horse flesh onscreen, will have his work cut out to match this theatrical magic.

Should Win: The Motherfucker With the Hat. It’s a potent reminder of what great American playwriting is. And it has a Hollywood pedigree in producer Scott Rudin, who just last year spearheaded The Social Network and True Grit. Having produced Motherfucker and The Book of Mormon, Rudin is the true king of Broadway.

Hollywood Scorecard: McDormand has an Oscar. So does Redgrave. Arianda’s role in Born Yesterday won Judy Holliday an Oscar. Yelland is playing the role that won raves for Celia Johnson in the 1945 film. And Rabe is the daughter of Hollywood royalty. Her mother is the late Jill Clayburgh; her father, David Rabe, wrote Casualties of War and Hurlyburly.

Will Win: McDormand. She’s the soul of Good People, and its bruised heart. Oscar meet Tony.

Should Win: McDormand. She owns that stage.

Photos: Leading Ladies on the Cover of Rolling Stone

Hollywood Scorecard: You may have heard of Pacino. Or seen Cannavale in Win Win or on TV’s Blue Bloods. Mantello left acting for directing until signing on as AIDS-fighting activist in the acclaimed revival of The Normal Heart. And Bedford is a theatrical legend, here playing a woman.

Will Win: In a tug of war between the giants Pacino and Rylance, I’m betting on Rylance.

Should Win: Cannavale. He’s a force of nature on stage.

Hollywood Scorecard: Except for Miller, the other nominees have all won Tonys. Hollywood hasn’t paid much attention to Foster and Leavel. Film fans remember Murphy in Star Trek: Insurrection and Spider-Man 2, but she’s fronting the weakest stage vehicle. Miller, the real energy source powering Sister Act, was one of the three finalists to play Effie in the film of Dreamgirls, which won Jennifer Hudson an Oscar. She may be on her way.

Will Win: Foster. It’s hard to resist watching her tap her way to glory as madcap Reno Sweeney in Anything Goes.

Should Win: Miller. Playing a disco queen hiding out in a convent, she stepped out of Whoopi’s movie shadow and made the role her own.

Hollywood Scorecard: Tony Sheldon’s drag act in Priscilla was originated by Terence Stamp in the 1994 movie. Butz’s Catch Me role as the dogged cop was played by Tom Hanks onscreen. Henry, Gad and Rannells are relative newcomers, though you may have seen Gad as Jake Gyllenhaal’s brother in Love and Other Drugs.

Will Win: Butz. Singing, dancing and acting like Broadway royalty, Butz actually surpassed what Hanks did on film. 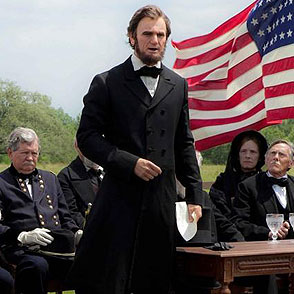 Should Win: Benjamin Walker (Bloody Bloody Andrew Jackson). I know. I know. The stellar Walker and his innovative musical were both Tony bypassed. Evidence enough to label the Tony nominators as backward idiots. Ignoring Daniel Radicliffe (How To Succeed in Business Without Really Trying) and Aaron Tveit (Catch Me If You Can) only strengthens that feeling. But Walker is the most grievous omission. Hollywood stepped up by giving Walker the lead in Abraham Lincoln, Vampire Hunter. He should save a stake in the heart for Tony.

Photos: Leading Men on the Cover of Rolling Stone