To Serve Man: Why 'Ravenous' Is the Greatest Cannibal Western Ever - Rolling Stone
×
×

Every few months, RollingStone.com shines a spotlight on a forgotten, neglected, overshadowed, underappreciated and/or critically maligned film that we love in a series called “Be Kind, Rewind.”  In honor of Halloween, we’re focusing on a horror film that will leave you hungry for more.

It may be hard to believe now, but once upon a time — call it the late Nineties — a major movie studio sunk $12 million into a comedic western about 19th century soldiers who believed eating other humans endow folks with superhuman strength and the ability to recover from life-threatening injuries. When shooting on the film crashed to a halt after three weeks of interference and executive micromanaging, one of the suits at at 20th Century Fox hit upon an idea: fire director Milcho Manchevski — the Macedonian art house sensation whose devastating wartime romance Before the Rain was nominated for an Oscar — and replace him with Raja Gosnell, whose only feature credit to date was Home Alone 3.

Empire of the Sunglasses: How 'They Live' Took on Republicans and Won

Shockingly, it didn’t work out.

The cast, lead by Guy Pearce and Robert Carlyle (fresh off his BAFTA-winning performance in The Full Monty), rejected Gosnell like a body denying a transplanted heart, and Ziskin’s filmmaker of choice returned to the comforts of his wheelhouse in Los Angeles, where he would promptly get to work on Never Been Kissed. Carlyle eventually pressured Fox into filling the director’s chair with his trusted collaborator, Antonia Bird, a veteran of British TV whose best known feature on these shores was Priest, about a closeted man of the cloth. It did not sound like an ideal match-up.

Shockingly, it turned out great.

Ravenous is a film that, by design, was forced to thread the needle between three different genres, a challenge that few directors have the finesse to overcome under normal circumstances — let alone on a project that had more cooks in the kitchen than it did carnivores on screen. Kicking off with the twang of a banjo that might not have been tuned since 1846, this Mulligan’s stew of a movie walks such a fine line between bleak comedy (“He was licking me!”), hyper-violent survival drama, and supernatural creature-feature that the guy narrating the trailer seems to have no idea what he’s actually selling. Advertising lies all the time, but seldom is it so confused: “One man must choose between having dinner, and being dinner…” (You wait for him to follow that oddly jokey declaration up with “I guess?”) Audiences of the time can hardly be blamed for not being sold.

But while many studio boondoggles betray the messiness of their making (Fantastic Four, anyone?), this ragged, unsung 1999 gem was one of the very few that was able to feed off the chaos. An origin story about the American spirit, the film is a lot like America itself: a melting pot of disparate elements, thrown together in a fit of violence, and galvanized by the righteous illusion that this is how God intended it to be.

Subtlety is not on the menu here, and it’s easy to imagine how the bluntness of the script by Ted Griffin (Ocean’s 11) helped it weather the constant assault of studio notes and creative upheaval. The story begins by introducing us to Second Lieutenant John Boyd (Guy Pearce), a Mexican-American War vet who’s being promoted to Captain after killing an entire unit of enemy soldiers on their own turf. The problem is that, after playing dead and being stacked in a heap of corpses, our hero was only capable of such battlefield bravery because of an unsettling jolt of strength — which he got from drinking trickling-down blood. Boyd is now nauseated at the sight of raw meat; he pukes behind a tent after a celebratory banquet as the title card flashes on screen. Laughs are usually the first things that get lost when a movie is Frankensteined together, but the film’s sick sense of humor remained intact. It’s ready to put the fun back into the Donner Party.

Boyd’s commanding officer learns the truth behind the valor, and the Captain — a war hero that the Army can’t afford to shame in public — is exiled to the frozen purgatory of Fort Spencer, where he’s stationed with a motley crew of other embarrassments (i.e. David Arquette) in the snowy Sierra Nevada mountains. Then a ragged Scotsman named F.W. Colqhoun (Carlyle) crawls out of the wilderness with a tale about a wagon train that derailed on its trip out West and resorted to cannibalism. Needless to say, Colqhoun is omitting some crucial details about his story, and — after orchestrating a trap that turns most of Fort Spencer’s troops into his personal buffet — he and Boyd are left to contemplate a future together in the frozen frontier, devouring whomever comes along. “Bon appétit,” he smirks. 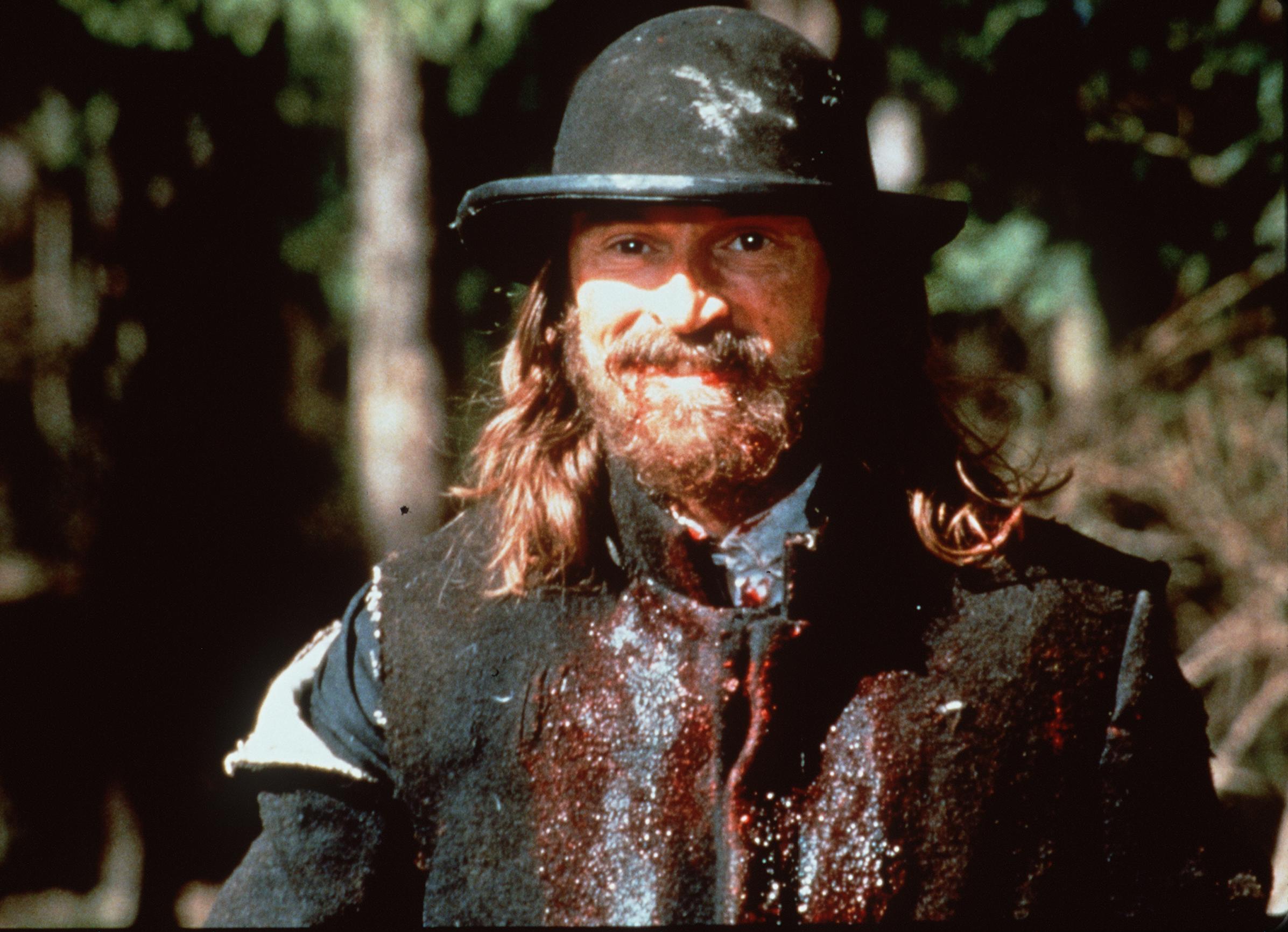 Opening with an American flag waving in the wind and closing with a column of fresh corpses, Ravenous butchers the fantasy that the United States is a banquet with room for everyone at the table. This is a landscape where “manifest destiny” becomes a handy euphemism for all sorts of horrors, and a reminder that progress was never possible without savagery; the frontier was the Hunger Games, and it always has been. That may not be breaking news, but the film isn’t interested in telling you something that you don’t know, only showing it to you in a way so giddy and gruesome that you’ll never be able to forget it.

Colonialism and capitalism get churned through the grindhouse, as Bird embraced the dungy stank of B-movies to gouge the dark heart of the American Dream. (Has any actor ever been as profoundly unclean as Carlyle is in the first half of this film?) If Boyd is the story’s blank moral center, it’s Colqhoun who represents true north. A first-generation immigrant with a flair for upward mobility, his twisted grin is horrifying proof that the hunger for power only grows more acute once you’ve had a taste of what’s on the stovetop. You know the joke about how hard it is for a cannibal to make friends? Carlyle’s character is the morbid punch line. “Eat or die,” the wanderer teases the mortally constipated Boyd, whose only claim to the ethical high ground is that he’s still able to see both as viable options.

Surprisingly, a story that rubs our faces in America’s ongoing history of cannibalism (cultural, commercial, or otherwise) is always going to be a tough sell in a country that still celebrates Columbus Day. Ravenous bombed at the box office, grossing $10 million less than it cost to make and anticipating a climate where a film like this would be lucky to premiere at Fantastic Fest in advance of a straight-to-VOD release. Perhaps that’s for the best. A major studio trying to wrangle something so bloodthirsty and off-kilter is like a child trying to raise a feral hyena — it’s too wild to tame, and it’s always laughing at you for trying.

But maybe this movie isn’t quite as bleak as it appeared at the time; maybe this is just a case of not being able to see the forest for the trees. For all of its nihilism, this perverse take on the weird, weird West digs so deep into the darkness that it eventually shines a light out through other side. Like Colqhoun, it knows that we have to face the truth — and like Boyd, it knows that doesn’t mean we have to live with it. To quote the film’s opening title card, it’s never too late to say “Eat me.”