The timing was coincidental, but it made a lot of sense for Howard Stern to throw his massive 60th birthday concert at New York’s Hammerstein Ballroom right around the same time as the Golden Globes, the State of the Union, the Super Bowl and the Grammys. In many ways, the evening felt like a combination of all those events: It had the all-star musical collaborations of the Grammys, the random grouping of A-list celebrities eating and drinking together that you usually only see at the Golden Globes, the chants, crazily-coveted tickets and sensory overload of the Super Bowl as well as the climactic speech by a revered (though highly polarizing) leader straight out of the State of the Union. It also had oysters and a rare intermingling of Barbara Walters and High Pitch Eric.

The four-and-a-half-hour event – which was broadcast for free on SiriusXM – was an evening full of high points. Here are eleven of them.

1. Lena Dunham Slays the Room. Howard Stern and Lena Dunham’s relationship got off to a very bad start when Stern told his audience that Dunham looked like Jonah Hill in a dress, but they made peace a few weeks later when she called into the show, and he’s since become a huge fan of Girls. Still, Dunham took the stage midway through the night and finally got her revenge. “I was so thrilled when I found out he knew who I was,” she said. “When I found out he was talking about me I tuned in just in time to hear him say I looked like Jonah Hill and that I was raping his eyes. He quickly apologized. . . . Then a minute later he asked me if I was intimidated because my boyfriend could be getting a much hotter piece of ass. At the time, I didn’t have the wherewithal to ask if you were intimidated because [your wife] Beth could definitely be with someone who doesn’t look like a cartoon of a Jewish female horse.”

2. The Wack Pack Packed Together. The menagerie of freaks and oddballs that Howard Stern has assembled over the years were worried that they’d be unable to get into the birthday show, but they ultimately crammed together into a single opera box near the side of the stage. Many of them go largely unnoticed in their day-to-day lives, but at this show every single one of them was a superstar. They dressed up in their finest outfits, with proud Wack Pack den mother Mariann From Brooklyn doing her best to make sure everyone was okay. They haven’t always gotten along over the years, but for this one night, Yucko the Clown, High Pitch Eric, Mark the Bagger, Fred the Elephant Boy and that musical genius known as Sour Shoes seemed like one big, happy family.

3. Jeff the Drunk Lives Up to His Name. An open bar with women carrying around endless trays of free beer is a dangerous combination, especially when Jeff “the Drunk” Curro is in the house. On the off-chance anybody suspects that Curro is a Shakespearian-trained thespian who merely acts like a fall-down drunk when he’s on the air, they were proven wrong at the birthday show. He chugged free beer all night long, barely paying any attention to the action on the stage. By the time John Fogerty walked out, Curro appeared to be barely conscious. When he tried to get up, he collapsed so violently it took four men lifting with all their might to get him back on his feet. It was sad to witness, but they don’t call him Jeff the Drunk for nothing.

4. Sarah Silverman Sings. It might have been a little awkward for Sarah Silverman to perform at a show hosted by her ex-boyfriend, but she cut through that tension the minute she walked onstage with an acoustic guitar. “Jimmy,” she said. “You used to be my world.” She then proceeded to sing an uproarious song about her love of the Howard Stern universe with Dixie Chick (and Stern superfan) Natalie Maines. “Robin Quivers took a veg-acation,” they sang together in perfect harmony. “Used meat and vegetables for her masturbation. She turned on drugs so she could find life’s answers, but instead she got a super gross, grapefruit-sized cancer. Eating right gives you cancer.” It only got funnier from there. 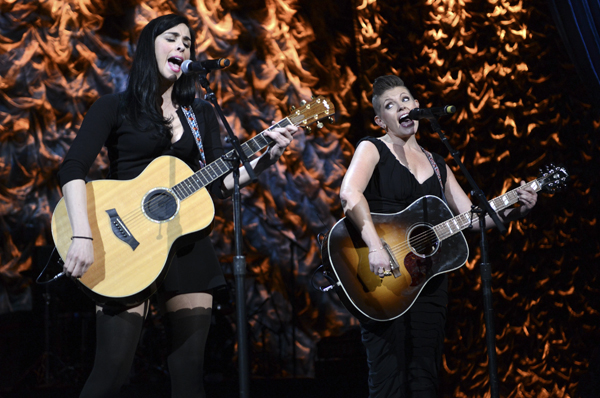 5. The Men of Late Night Unite. Only Howard Stern could bring together Jimmy Kimmel, Jimmy Fallon and David Letterman, who will all be battling it out at 11:35 p.m. in just a few weeks. Kimmel, one of the few people in the world that Howard Stern considers a truly close friend, emceed the entire night, pouring drinks for the guests and making sure there were no awkward silences. Fallon came out, handed Howard a stopwatch, and told him to say “change” every ten seconds. He then proceeded to impersonate Jerry Seinfeld, Bill Cosby, Adam Sandler, Chris Rock, Norm McDonald, Gilbert Gottfried and Robin Williams in less than two minutes. It was incredible.

It was clear, however, that Stern was most thrilled that David Letterman decided to drop by. They spoke for over twenty-five minutes, as Stern grilled him on everything from why he didn’t attend the funeral of Letterman regular Larry “Bud” Melman to how he interacts with the parents of his son Harry’s friends. He even got Letterman to say that he couldn’t recall ever voting for a Republican, but the most interesting parts of the discussion revolved around Jay Leno. Stern is still furious at Jay for hiring Stuttering John Melendez without asking him, but Letterman – who has significantly bigger grievances against the man – basically admitted that he’s gotten over his anger. They’ve even spoken on the phone a few times since NBC took The Tonight Show away from him. It was a riveting talk, complicated only by the fact that many people on the floor were mingling and drinking instead of paying attention.

6. Howard Wins Over His Enemies. Back in the 1990s, Stern spent a lot of air time relentlessly bashing Rosie O’Donnell and Kathie Lee Gifford. It was nearly impossible to imagine either of them ever befriending him, but time does funny things to people and Stern has mellowed over the years. Kathie Lee made a hilariously tongue-in-cheek toast to Stern from the Today Show set, while Rosie dropped by in person. “If Howard were a girl,” she said, “we’d make lesbian love.”

7. Louis C.K. Pays His Respects. It was a very loud room and many speakers struggled to capture everyone’s attention, but the place hushed the minute that Louis C.K. walked onstage. He recalled the first time he ever heard Stern on the radio back in the 1980s when he was stuck in New York traffic. “I remember he was making a prank call to Yoko Ono while speaking through a megaphone,” he said. “To me, this man was New York City. He’s the voice of the city. He made me want to move to New York. Howard, to me, is the guy that said, ‘Be yourself and let the chips fall where they may.'”

8. Jewel Sings A Howard Oldie. When Stern was in the 6th grade, he briefly fronted a group called the Electric Comic Book. Their Stern-penned songs “The Psychedelic Bee” and “Silver Nickels And Golden Dimes” have been covered by everyone from Sugar Ray to William Shatner over the years. Jewel sang “Silver Nickels and Golden Dimes” last year on the show, and she revived it at the birthday bash. It’s a bizarre song about a prostitute, but Jewel made it sound like an outtake from Pieces of You. Mark McGrath, who did an amazing job with “Psychedelic Bee” back in the day and even released it on a Sugar Ray album, was in the house, but sadly he wasn’t brought on stage or even referenced during the event. 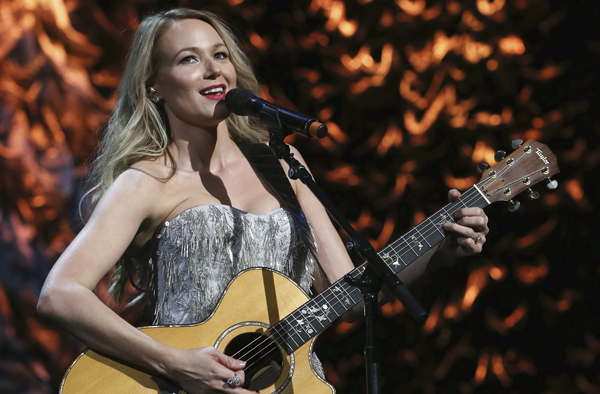 10. Classic Rock Rules the Night. Train served as the house band for the evening and they sang a couple of their own songs, but mostly they ceded the spotlight to others. Adam Levine joined them for a surprisingly competent rendition of “Purple Rain” and Jon Bon Jovi sang “Wanted Dead or Alive” with the band, though John Fogerty opted to bring his own group. They absolutely killed with “Bad Moon Rising” and “Fortunate Son.” Fogerty doesn’t have much of a connection to the Stern show, but he was the best musical act of the night.

Dave Grohl played a solo acoustic “Everlong” and then sat on the couch and told Stern that an impromptu rendition of the song he played on the show in 1998 gave his career an incredible boost. “I honestly wouldn’t be here today had I not done that,” he said. Stern played that song countless times, turning it into a giant hit and elevating the Foo Fighters into a major band. He then performed “My Hero” right before they wheeled out a white piano so Steven Tyler could sing “Dream On” with Train and surprise guest Slash, who came out halfway through to play the guitar solo. Dave Grohl then sat down at the drum kit and lead the supergroup into the grand finale of “Walk This Way.” Everyone from Cyndi Lauper to Rob Zombie to Tom Arnold ran onstage to sing along to the chorus, and Howard even danced a little with Beth.

11. Stern Gets Serious. Before “Walk This Way,” Stern gave an uncharacteristically heartfelt speech where he thanked all the important people in his life. “I never envisioned I’d make more than $96 a week in this industry or be part of anything this big,” he said. “When I look around this room, I am overwhelmed and, I mean this, it was the most incredible night of my life.”